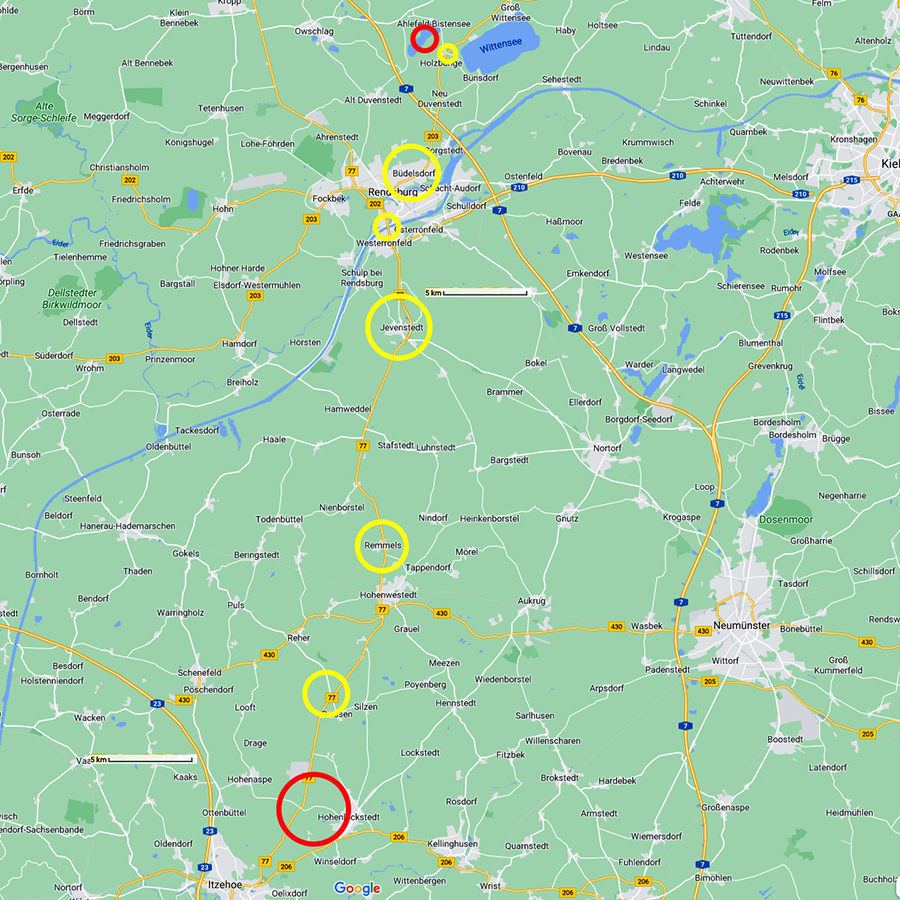 What a treat it was to have a kettle and oven for breakfast. I made some Töstis and tea. We were packed and on the road at 0700h. The first part of the ride was hard going. The whole area is a nature reserve and quite hilly. I had to get off and walk the bike several times up some long rises.

At the same time we had some excellent downhill runs which made up the mileage and the distance. We did some shopping along the way, stopped for a cuppa in an old bus shelter and headed for Rendsburg. There was a section of the highway (no bicycles) marked on the map but the girl in a service station assured us that we could get around that section. We would have to go through a tunnel to cross the Kiel canal. 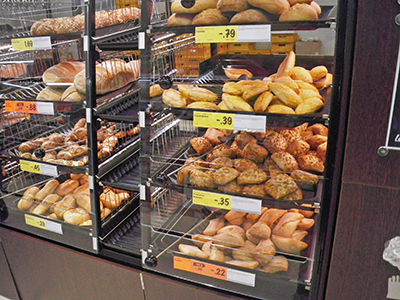 German bread is the best in the world, its flavour, crustiness and variety is second to none.

And yes, I do think it is better than French bread! 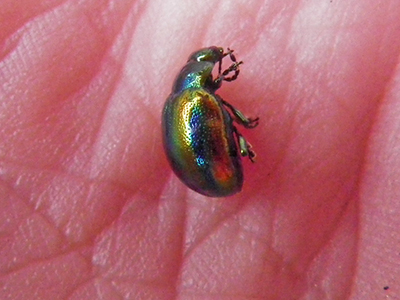 I was delighted to find this iridescent jewel beetle. 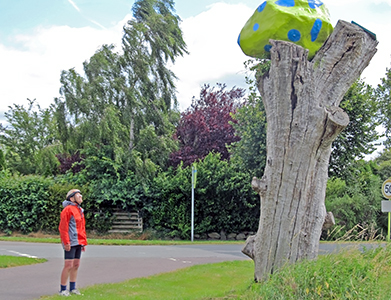 We could not work this out, but presumably it was an art installation of some kind.

It seemed forever getting to the tunnel but we arrived to find a massive escalator leading down. I had trouble managing the bike on the escalator so we took the lift up on the other side of the tunnel. We then had to navigate through Rendsburg and had lunch along the way in a park. 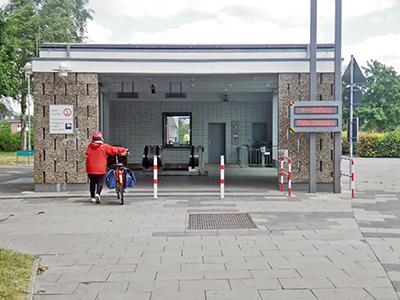 Fahrtreppen und aufzug - escalators and lift/elevator for crossing beneath the Kiel Canal.

The Kiel Canal was finished in 1895, but later widened, and links the North Sea at Brunsbüttel to the Baltic Sea at Kiel-Holtenau. An average of 250 nautical miles (460 km) is saved by using the Kiel Canal instead of going around the Jutland Peninsula. 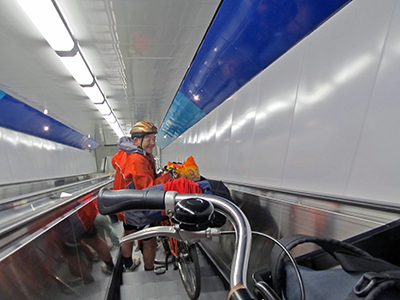 It was a very steep escalator, made more difficult by having to keep control of the bike. 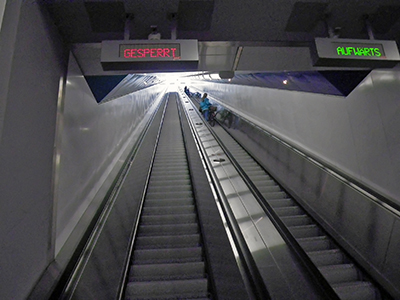 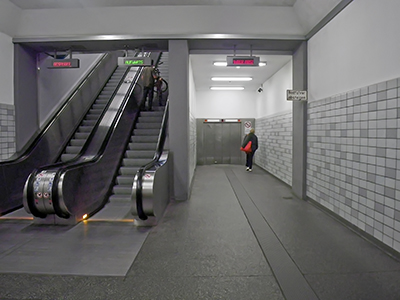 At the bottom, I took photos of the setup.

One escalator goes up, and one down, and so of course the signs warn you of this, and tell you to walk your bike -

We decided to take the elevator back up once we had walked our bikes through the tunnel. 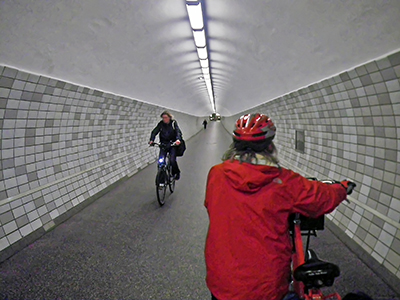 Not everyone obeys the rule about walking your bike! 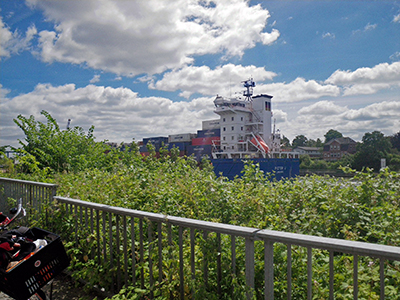 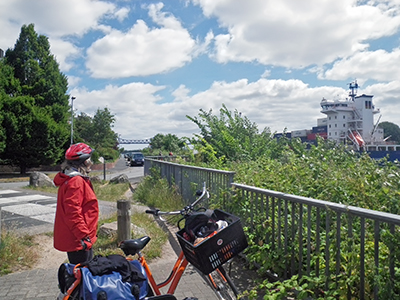 When we returned to the surface via the elevator/lift, we could see the size of the ships which use the canal to travel between the Baltic and the North Sea. 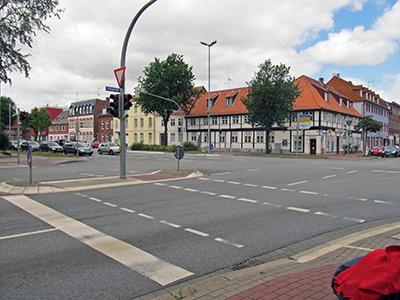 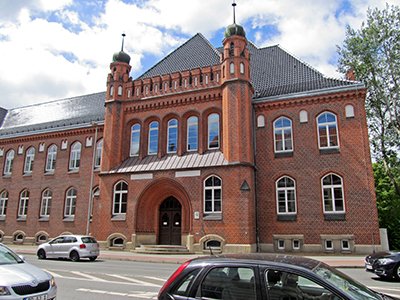 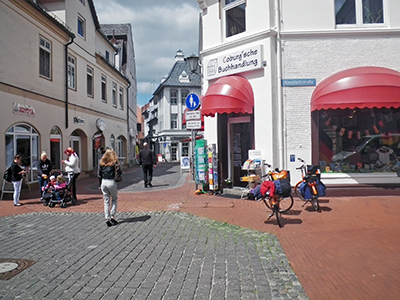 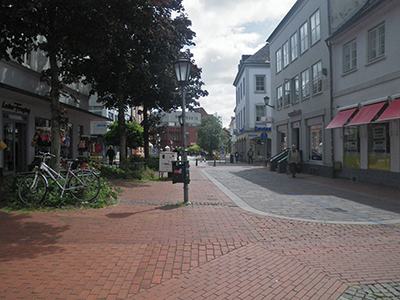 We then had to make our way through the large town of Rendsburg, which took some time. It was the biggest town we had passed through since leaving Amsterdam, but the transit was unavoidable. 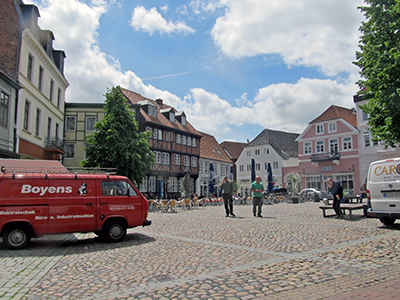 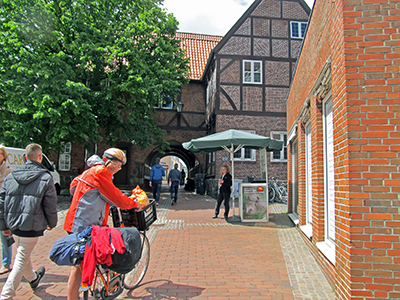 Rendsburg was an interesting architectural mix of the old and the new.

After lunch in the park it was a case of getting out of town and heading north. We followed highway 203 and went through the satellite town of Büdelsdorf and then over the Autobahn, highway 7, to Holzbunge. Here we turned left following a camping sign. The campsite at Hans und Margarete Jarck was right beside the Bistensee. We found a sheltered site and settled down for the night. 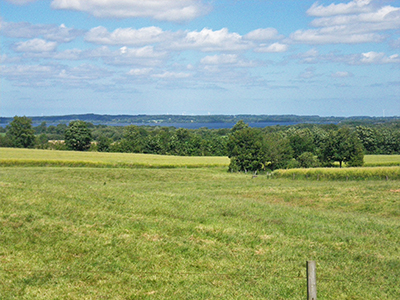 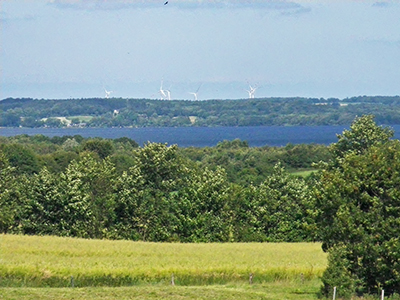 We finally got out of the large town of Rendsburg, and headed north on highway 203. Just past the village of Holzbunge we spotted a camping sign, and so turned left towards the lake of Bistensee.

The zoomed in image shows the large lake, the windmills on the ridge behind, and a large raptor in the sky, looking for a late lunch. 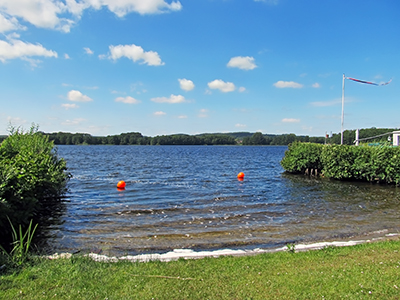 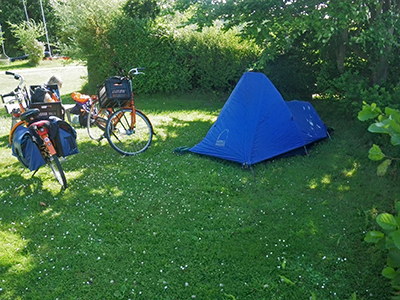 We found an idyllic sheltered spot beside the lake, at the Hans und Margarete Jarck campsite, and set up the tent.

It had been a good day.