Back to Tools of the Stone Age Index 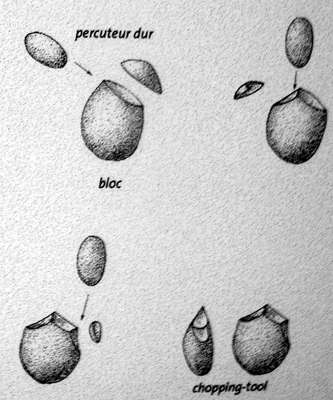 Stones were able to be transformed directly into tools by shaping. The first such tools were called choppers and chopping tools.

The first step consists of detaching a flake from the stone with aid of a hammerstone, generally another pebble.

By repeating this gesture, they had a rough edge.

A cast of a Solutrean "laurel leaf" spear point, over 13 inches long. These delicate and beautiful implements were prepared by delicate flaking across the surface. Many are so large and delicate that they could never have been actually used, and may have been status objects. 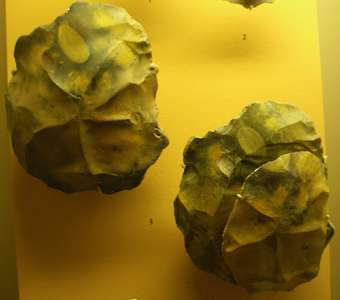 These are high quality facsimiles demonstrating the Levallois Technique.

The Levallois technique, invented 300 000 years ago, was a revolutionary technique. The knapper prepared a core of flint to get a shape commonly known as a tortoise shell, which presents a convex surface. From a few blows, one or more flakes, of pre determined shape can be detached from the nucleus. The standardised flakes can then be altered for various purposes. The Levallois technique produced many successive flakes, four on average, from the same prepared nucleus, which allowed the knapper to economise on good quality flint.

Levallois nucleus/core from the region of Bergerac.

This is superb quality flint, worked by a master craftsman. 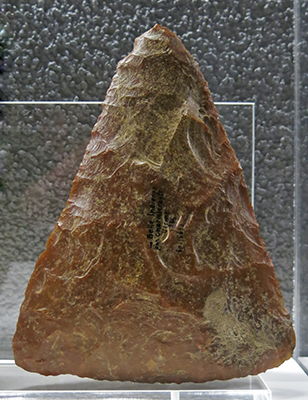 Mousterian biface hand axe, made of flint. This is an important piece from the Department Vienne near Châtellerault (La Belle Indienne), as may be seen from the inscription on the axe.

Note that at the time of writing the catalog of the museum is in error regarding its origin, ascribing it to Fontmaure (Vienne). My thanks to Katzman of http://www.aggsbach.de/ for the heads up about this important discrepancy. See http://www.aggsbach.de/2016/10/the-ordinary-and-the-special-triangular-handaxes-bifaces/

Katzman writes (p.c.) that about 2006 an American collector bought a similar piece at a French auction house for $14 000 USD. 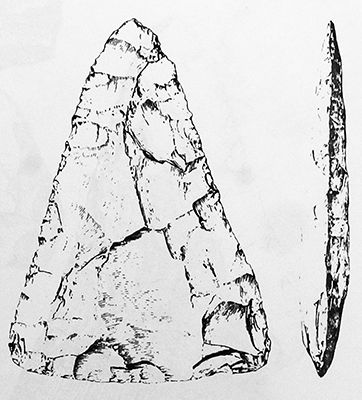 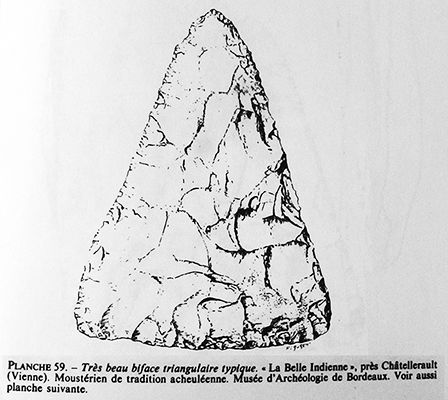 These are the drawings of the piece above by Bordes from his text Typologie du Paleolithique ancien et moyen, 1979. 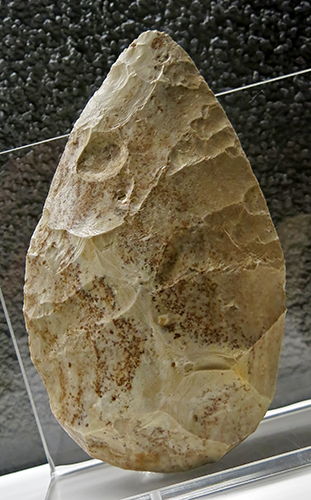 
The images and text for the methods of making tools below come from "Early Man" by F. Clark Howell, 1965. Drawings by Lowell Hess.

About 150 000 years ago, the first of several dramatic advances in tool technology took place. With their increasing brain capacities, early homo sapiens acquired the foresight and ability to perceive in a raw lump of stone a finished tool of a complex nature. To produce such implements required long series of preparatory steps, but with new methods, developed from the old techniques of percussion and, later, pressure flaking, early men produced tools of increasing sharpness, delicacy and beauty.

The Levallois (Mousterian) technique animation for a blade (left) and a point (right).

Click on the images to expand and view the animation of how the techniques are performed.

Making a Burin from a blade 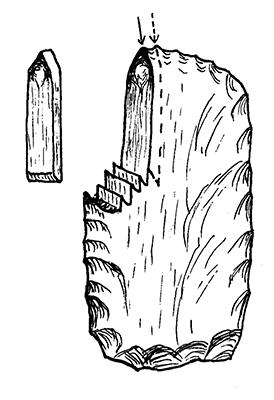 Note negative bulb (below arrow and on spall). 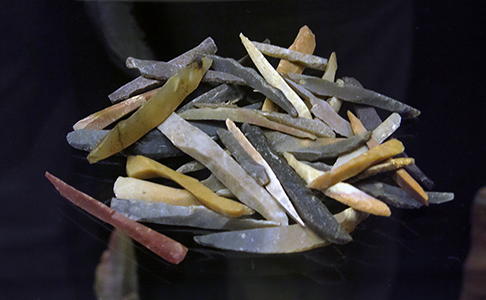 Burin spalls often turn up in an archaeological context. They were sometimes used as tools in their own right.

These are from Le Souci, Lalinde, Collection Delugin, Iegs 1923

Back to Tools of the Stone Age Index