The first of our kind. Two views of a composite reconstruction of the earliest known Homo sapiens fossils from Jebel Irhoud (Morocco) based on micro computed tomographic scans of multiple original fossils. Dated to 300 thousand years ago these early Homo sapiens already have a modern-looking face that falls within the variation of humans living today. However, the archaic-looking virtual imprint of the braincase (blue) indicates that brain shape, and possibly brain function, evolved within the Homo sapiens lineage.

The history of our own species goes back much further than previously believed. Early representatives of Homo sapiens lived in what is now Morocco around 300 000 years ago, as newly discovered fossils from a cave on Mount Djebel Irhoud now show. Researchers from the Max Planck Institute for Evolutionary Anthropology (MPI-EVA) in Leipzig found the remains of at least five people, including three young adults, a teenager and a child, in years of excavations there, around 100 kilometers northwest of Marrakech. This is what the research team around the paleoanthropologist Jean-Jacques Hublin reports in the current issue of the journal 'Nature'.

The ancestors found now were very similar to us. Above all, their face largely corresponded to that of today's people. "The ancestors from Djebel Irhoud would hardly be noticed in a crowd today with a hat on," says Hublin. Her brain was also about the same size as that of modern humans, only the shape of the back of the head was slightly different. The Djebel Irhoud people had a less round, slightly elongated skull and probably also a smaller cerebellum than we do. The brain of Homo sapiens has evolved gradually since then, says Hublin, and it has become increasingly networked and organised. 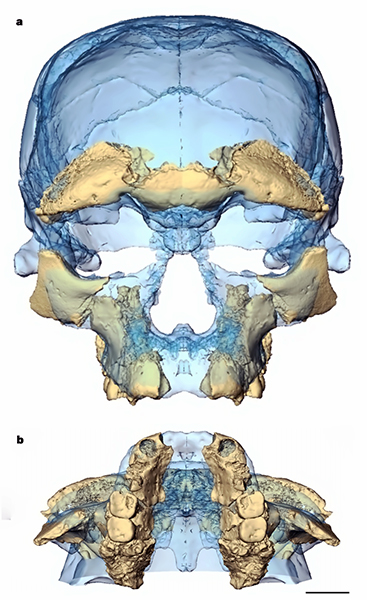 This may be the earliest Homo sapiens found.

Fossil evidence points to an African origin of Homo sapiens from a group called either H. heidelbergensis or H. rhodesiensis. However, the exact place and time of emergence of Homo sapiens remain obscure because the fossil record is scarce and the chronological age of many key specimens remains uncertain. In particular, it is unclear whether the present day 'modern' morphology rapidly emerged approximately 200 thousand years ago among earlier representatives of Homo sapiens or evolved gradually over the last 400 thousand years. 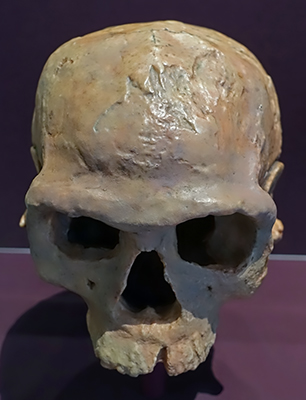 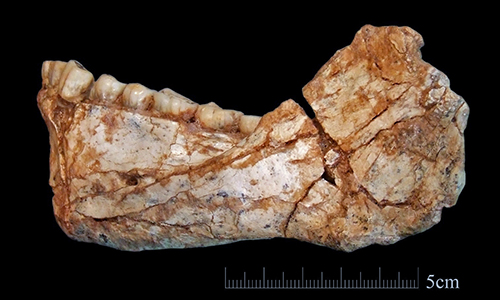 An almost complete adult mandible discovered at the Jebel Irhoud site in Morocco. 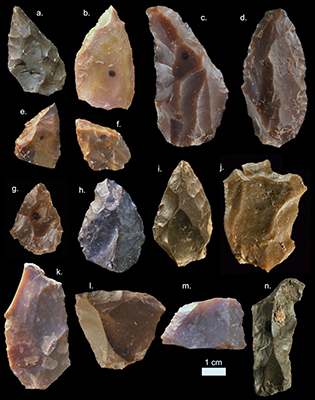 Some of the Middle Stone Age stone tools from Jebel Irhoud, Morocco. Dated to 300 thousand years ago. Pointed forms such as a-i are common in the assemblage. Also characteristic are the Levellois prepared core flakes (j-k).

This is a facsimile of one of the Jebel Irhoud fossils. 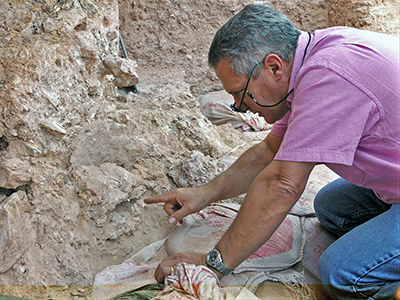 Jean-Jacques Hublin at Jebel Irhoud (Morocco), pointing to the crushed human skull (Irhoud 10) whose orbits are visible just beyond his finger tip.

Jebel Irhoud is the site of an old barium mine, which is how the first fossil skull was discovered at this site in 1961. Much of the rock and sediment was carted away by the mining operation and is no longer available - the stratigraphy is lost to us. Later excavations of the site in the 1960s found other fossil fragments and stone tools but the exact location of these finds is also uncertain – only one fossil has a stratigraphic location.

At the time the site was occupied by early hominins, it would have been a cave, but the covering rock and much sediment were removed by work at the site in the 1960s.