This cave is a pre-Mousterian site, of the The Acheulo-Yabrudian complex, which is a complex of archaeological cultures in the Levant at the end of the Lower Palaeolithic. It follows the Acheulian and precedes the Mousterian.

The cave was found in October 2000 when road construction destroyed its ceiling.

This led to two rescue excavations in 2001. At present the site is protected, covered, and fenced, and subject to on-going excavations. 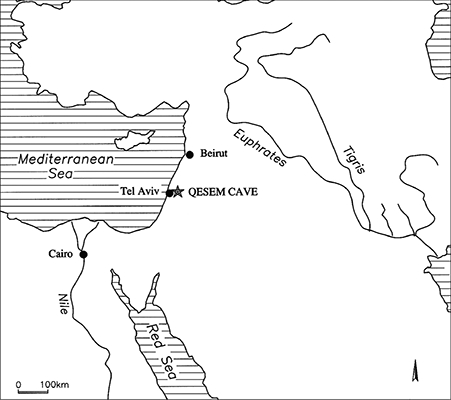 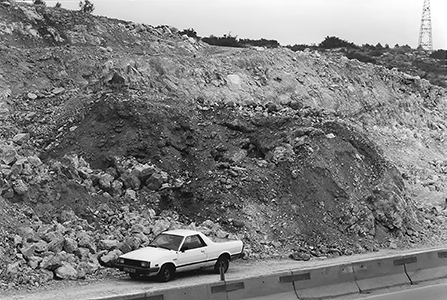 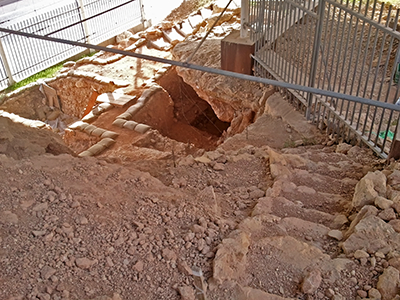 The dig at Qesem Cave. 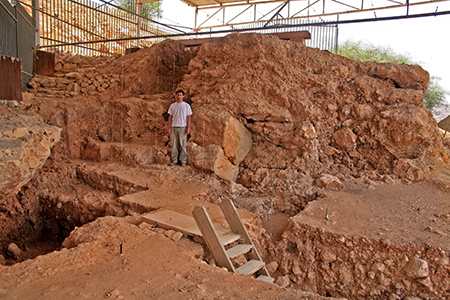 Qesem cave is a karst cave located on the lower, western slopes of the Judean Hills in Israel, 90 metres above the sea level and about 12 kilometres from the Mediterranean Sea. The cave's known limits are approximately 200 square meters (~20x15 metres and ~10 metres high), although there are several partly visible passages which have yet to be excavated.

Hominid occupation of the cave has been documented in a 750 cm - 800 cm thick layer of sediment, divided into an Upper Sequence (~400 cm thick) and a Lower Sequence (~350 cm thick). Both sequences are believed to be associated with the Acheulo-Yabrudian Cultural Complex (AYCC), which in the Levant is transitional between the Acheulean period of the late Lower Paleolithic and the Mousterian of the early Middle Paleolithic.

The stone tool assemblage at Qesem Cave is dominated by blades and shaped blades, called the 'Amudian industry', with a small percentage of Quina scraper-dominated 'Yabrudian industry'. A few Acheulian hand axes were found sporadically throughout the sequence. Faunal material discovered in the cave exhibited a good state of preservation, and included fallow deer, auroch, horse, wild pig, tortoise, and red deer.

Cutmarks on the bones suggest butchery and marrow extraction; the selection of bones within the cave suggest that the animals were field-butchered, with only specific parts returned to the cave where they were consumed. These, and the presence of blade technology, are early examples of modern human behaviours.

Qesem Cave's stratigraphy has been dated by Uranium-Thorium (U-Th) series on speleotherms--natural cave deposits such as stalagmites and stalactites, and, at Qesem Cave, calcite flowstone and pool deposits. Dates from the speleotherms are from in situ samples, although not all of them are clearly associated with the human occupations.

Speleotherm U/Th dates recorded within the top 4 meters of the cave deposits range between 320, 000 and 245 000 years ago. A speleotherm crust at 470 - 480 cm below the surface returned a date of 300 000 years ago. Based on similar sites in the region, and these suite of dates, the excavators believe that occupation of the cave began as long ago as 420 000 years ago. Acheulo-Yabrudian Cultural Complex (AYCC) sites such as Tabun Cave, Jamal Cave and Zuttiyeh in Israel and Yabrud I and Hummal Cave in Syria also contain date ranges between 420 000 - 225 000 years ago, fitting with the data from Qesem.

Animals represented at Qesem cave include approximately 10 000 microvertebrate remains, including reptiles (there are an abundance of chameleons), birds, and micromammals such as shrews.

Human remains found within the cave are restricted to teeth, found in three different contexts, but all within the AYCC of the late Lower Palaeolithic period. A total of eight teeth were found, six permanent teeth and two deciduous teeth, probably representing at least six different individuals. All of the permanent teeth are mandibular teeth, containing some traits of Neanderthal affinities and some suggesting a similarity to hominids from Skhul/Qafzeh caves. Qesem's excavators are convinced that the teeth are Anatomically Modern Human.

Qesem Cave was discovered in 2000, during road construction, when the cave's ceiling was almost entirely removed. Two brief salvage excavations were conducted by the Institute of Archaeology, Tel Aviv University and the Israel Antiquities Authority; those studies identified the 750 cm sequence, and the presence of AYCC. Planned field seasons were conducted between 2004 and 2009, led by Tel Aviv University. 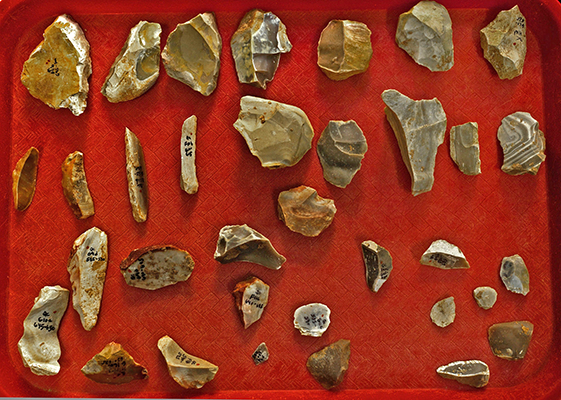 A selection of the wide variety of tools found at Qesem Cave.

( note the 'thumb grip' on some tools in this image, which is often present in Neanderthal scrapers in particular, usually made with just one blow, showing mastery of the technique - Don ) 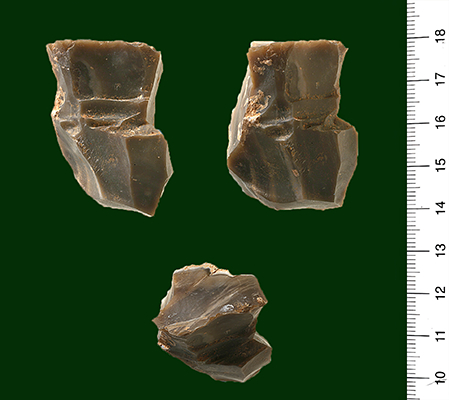 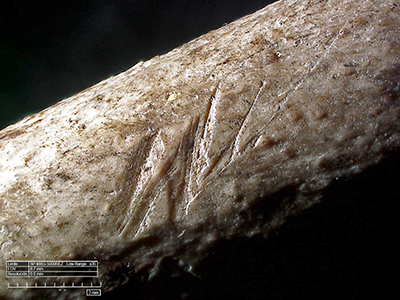 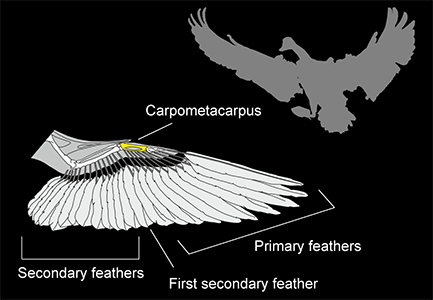 The cut marks on this swan wing bone, the Carpometacarpus, could only have been to remove the feathers, since the bone concerned is effectively meatless. However the large primary feathers of the swan are attached to this particular bone, and indicates that these feathers were highly prized.

If the Qesem occupants had been butchering birds just for meat, we’d expect to find the human-made cut marks largely confined to meat-bearing bones like the thighs. 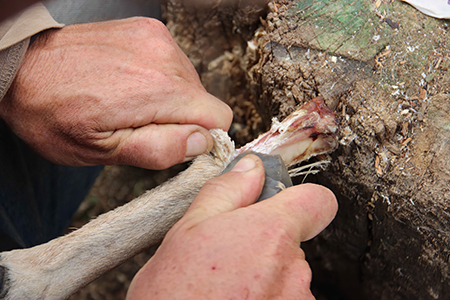 Experimental anthropology: An explorer removes the skin from a leg bone.

Apparently they had future times in mind: Palaeolithic people stored animal bones, in order to be able to later consume the bone marrow preserved in it, if necessary, according to a study. This finding proves that even our ancestors from the time 420,000 to 200,000 years ago not only lived from hand to mouth, but already acted proactively, say the researchers.

They are usually the remnants of a meal - but some bones still have something to offer: In the long bones of the limbs of animals is a particularly nutritious and tasty substance: the bone marrow. The high-fat tissue was an important source of food for our ancestors, as numerous finds prove. You can clearly see how people once broke the bones and carefully scraped out the precious fatty tissue.

These bones had it all Bone remains with corresponding processing traces are also known from the Qesem Cave in Israel. They testify to a human settlement of this cave 420 000 to 200 000 years ago. However, it is noticeable that the inhabitants only brought up certain body parts of killed animals, reports the international research team in the current publication. The most common prey was therefore fallow deer, whose bodies were apparently freed from meat and fat at the hunting ground. 'The remains were left behind - but that was not true for the legs of the animals - they were brought into the cave', says co-author Jordi Rosell of the Spanish University Rovira i Virgili in Tarragona.

From these pieces, the bone marrow was taken out there, as illustrated by traces of processing. To do this, the humans first scraped skin and tissue from the severed limbs and then broke the bones. But did that happen immediately or were the legs first stored and used later as a source of food? To investigate this question, the scientists examined whether the traces on the found bones provide clues as to when the bone marrow was extracted. In order to obtain comparison material, they stored leg parts of fallow deer for different lengths and performed on these pieces experimental bone marrow extractions.

As they report, it became apparent: storage requires more effort to remove the dried skin from the bones before breaking it. This is clearly reflected in the experimental traces of the treatment, the researchers report. If they removed the skin after two or more weeks, significantly more short cuts and saw marks were made on the bones. The principle became clear: the longer the storage time, the more processing traces. The researchers were then able to use this knowledge to assess bone findings from the cave.

It turned out that 80 percent of the bones were apparently broken after a storage period of at least four weeks. Analyses of the bone marrow showed that a longer shelf life was also possible: the nutritional quality can be maintained up to a storage period of nine weeks. 'The bones were used like canned food: only when it was necessary, they removed the dry skin, smashed the bones and then ate the bone marrow,' says co-author Ran Barkai of Tel Aviv University. It is the earliest known indication of a form of food preservation, say the scientists.

Until now, the idea that Palaeolithic people still lived from hand to mouth dominated - what was available was immediately consumed. On the other hand, a short supply of food meant that people were hungry and their own physical reserves were used up. However, the current study shows that this was probably not the case. "We show for the first time that 420 000 to 200 000 years ag, prehistoric people in the Qesem Cave knew that they could store the rich bones under certain conditions and later extract them from the marrow," co-author Abraham sums up.