Brno Burial of a Shaman

The Brno II burial was discovered by accident in 1891, and part of it salvaged by A. Makowsky. Its position on the lowest erosion level of the Svitava River and the upper loess base date it to a time just before the Pleniglacial B. The stratigraphical position thus corresponds with that of known sites of mammoth hunters of the Gravettian (Pavlovian). The burial is characterised by several unusual features: its location outside both the site and the settlement area, the state of health of the buried man (dispersed periostitis, flection of the femur), unusual grave goods such as a male idol (the only anthropomorphic sculpture to be found in a palaeolithic burial), roundels made of different raw materials with symbolic ornamentation, many hundreds of fossil shells of a single type, a large amount of bones from a large game animal, and the absence of any item of practical (i.e., technical) use. The buried man apparently held a significant position in the ritual sphere. 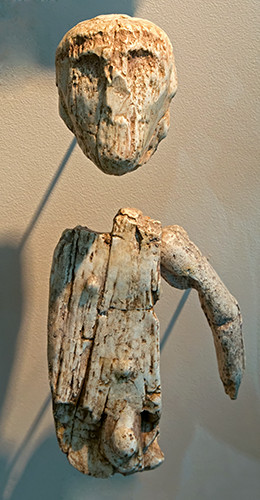 One of the most important Palaeolithic finds in Brno was uncovered in 1891 when building a sewerage system on Francouzská Street, in the intersection with Přadláckou Street. According to a recent report by A. Makowski , the skeleton of a man with numerous other bones ( mammoth scapula and tusks, skull and rhinoceros ribs, horse teeth ) and utility items (a stone disc and part of a reindeer antler that could have served as a retoucher for flint blades ) and ornamental or ritual ( crust shells over 600 pieces, 14 pieces of stone, bone and mammoth discs, some of which can be interpreted as solar or female symbols , as well as a male sculpture. The skeleton was covered with red ochre, some bones carrying traces of bone inflammation from periostitis .

There was apparently buried an important man of the society, accompanied by ceremonies and with many unusual charity. It is sometimes referred to as a "magician (or shaman ) from Brno".

Only part of the ensemble has been preserved; the uniqueness of individual objects makes it difficult to date the funeral. The funeral is supposed to belong to the culture of the Pavlovian, about 25 000 years old.

This is another photo of the statuette above. Carved from mammoth ivory, and touched with red ochre, the statuette is in the form of a puppet or doll. (20 cm)

A facsimile of the Brno marionette. 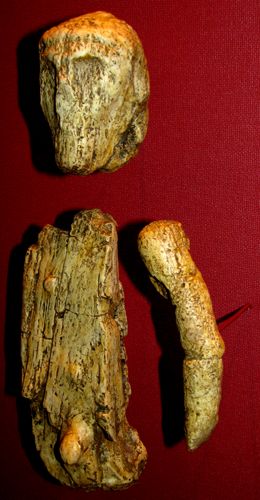 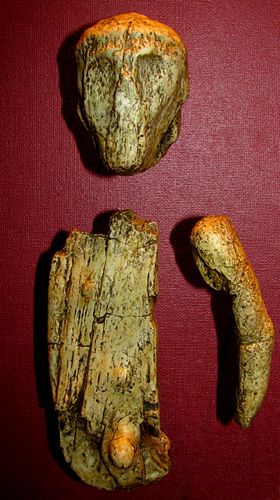 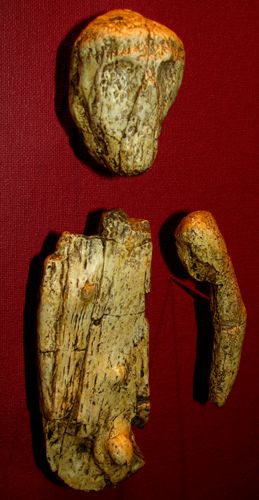 A facsimile of the Brno marionette. 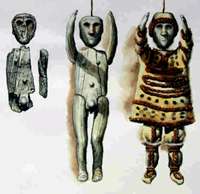 A reconstruction of the Brno marionette.

This marionette was found in the grave of what has been interpreted as a shaman. 28 000 years ago (23 500 RCYBP) a 10-year-old boy began to suffer from an excruciating, even unbearable pain in his hands and legs. He suffered from periostitis, an inflammation of the periosteum, a dense membrane composed of fibrous connective tissue that closely wraps all bone, except the bone of articulating surfaces in joints which are covered by synovial membranes. So periostitis literally is inflammation around the bone.

Photo and text adapted from: http://www.iabrno.cz/agalerie/pavlova.htm 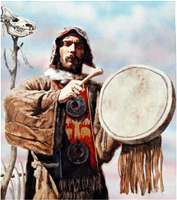 He learned how to defeat his pain, grew up into a strong man and become a shaman because of his abilities and qualities. He possessed a fascinating cap sewn with some 600 shells (of the Dentalium badense), a marionette, many discs made of various materials and several animal skulls. When he died, the survivors broke his drumstick, and one of its parts was placed in his grave together with the other things that he was using. It is possible that they placed the other part on the top of the grave together with the drum. This custom still exists in some Arctic communities.

Photo and text adapted from: http://www.iabrno.cz/agalerie/pavlova.htm 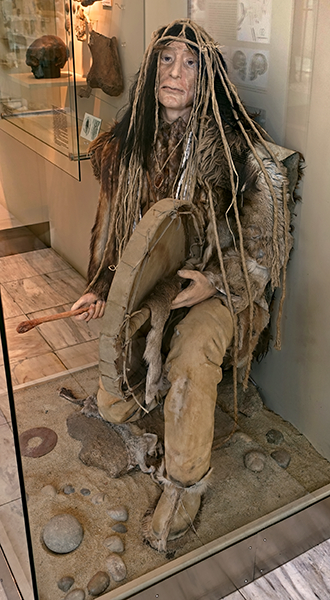 Gravettian Shaman from Pavlovian times, recreated from the burial of the shaman of Brno.

A man's head and body carved from mammoth ivory was found at Brno in Moravia. A portion of the neck is missing, and the legs are broken off. There once were arms and part of one survives, but whether the legs were ever complete is not known. If they were, and were long in proportion, then the figure would have stood some 17 inches (42 cm) tall. In spite of the ravaged condition of the face, enough survives to show that it was no caricature: the hair was cropped, the brow rather low but straight, the eyes deep-sunk. The body is too damaged to judge its degree of naturalism but it seems more schematic than the head. Both head and body are pierced lengthwise. The figure was found with the burial of a man who wore, in his prepared grave, a headdress or necklace made up of some 600 slivers of Dentalia shells, roundels cut from bone, and cut and polished beads of mammoth tooth, and finally a stone disc with a central hole, probably used in drilling and possibly connected with fire making.

According to a recent examination of the material and of the site, the man who had owned these personal treasures was of a rather primitive physical type: robust, with unusually heavy brow-ridges very slightly hollowed between the eyes, and approximating to the so-called Combe Capelle type, but with more of Neanderthal-like characteristics. 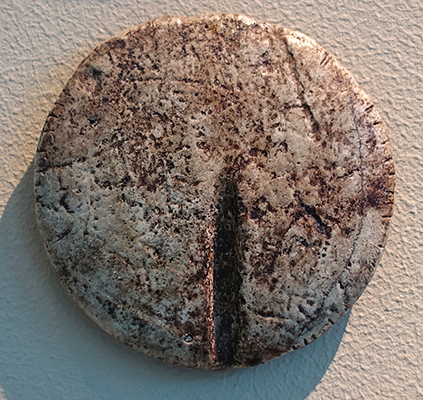 Careful tertiary processing from different raw materials (ivory, mammoth molars, bone, limonite, siltstone) produced objects which symbolised cosmologic phenomena and sexual characters. Certainly they did not serve as ornaments, because they lack the possibility of fixing or hanging.

Delicate cuts on the edges of this object made from a mammoth molar are barely visible to the eye. It is possibly a magic prop for some esoteric rites, and was found in the grave of the shaman from Brno. 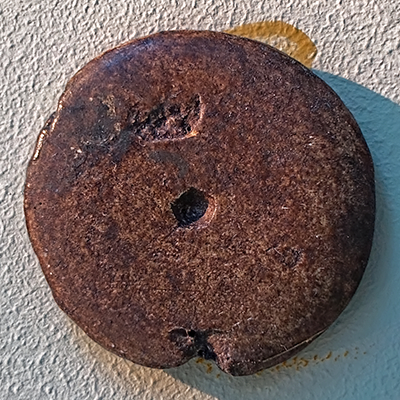 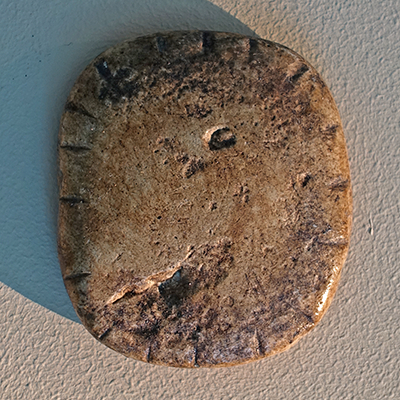 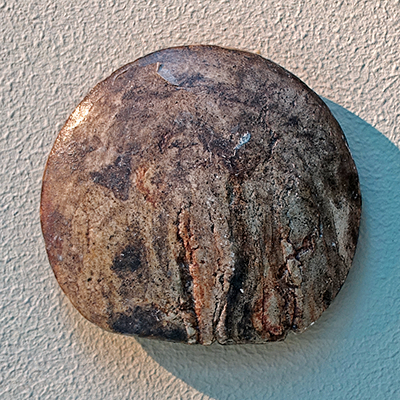 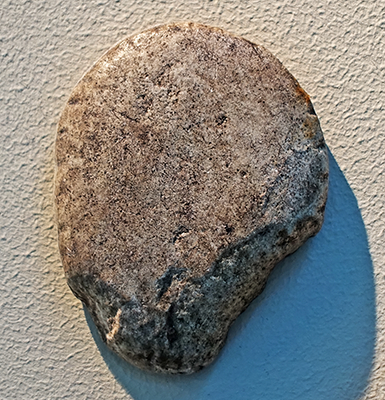 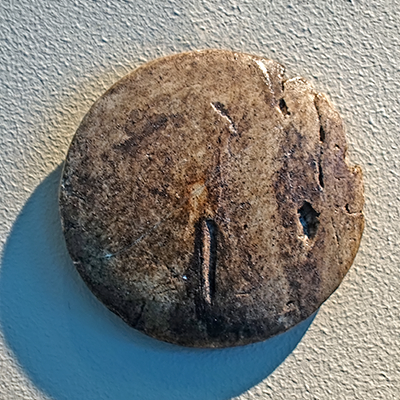 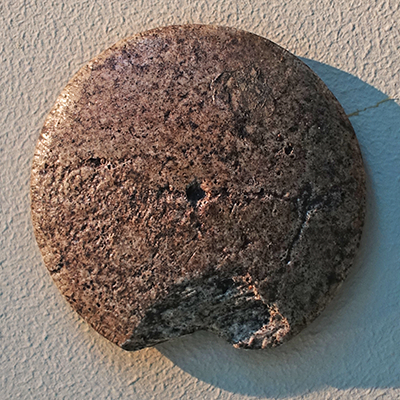 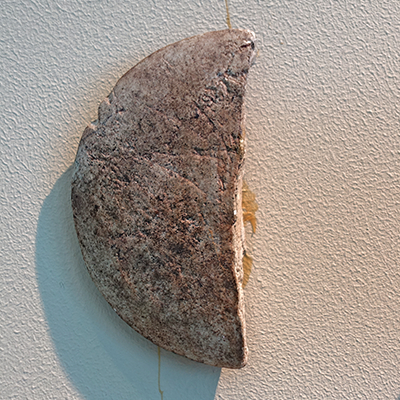 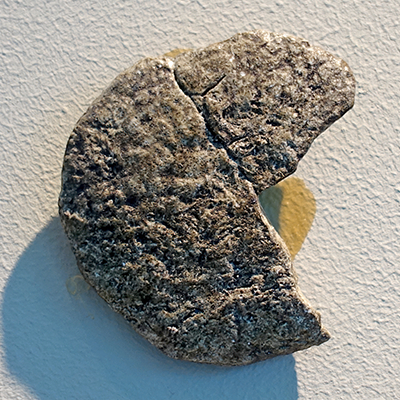 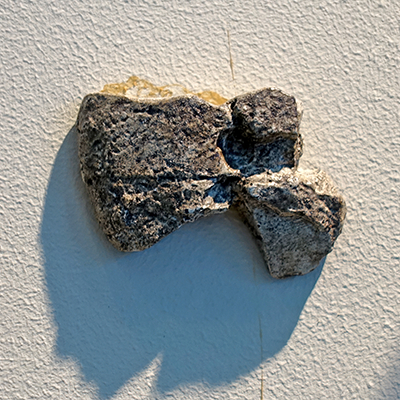 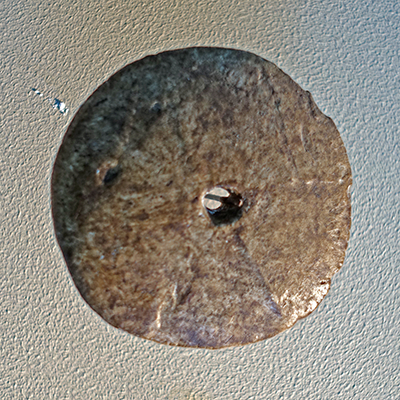 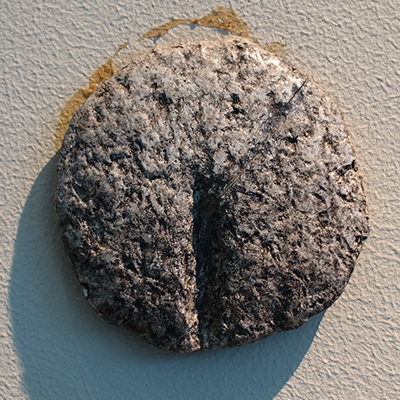 There were a number of vulvae and other magical objects in the grave of the shaman from Brno, as well as the famous puppet. 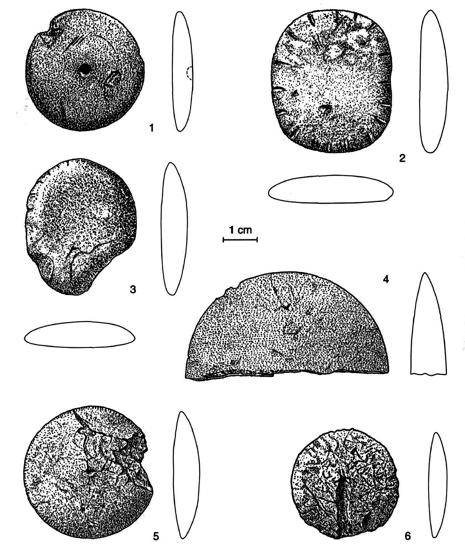 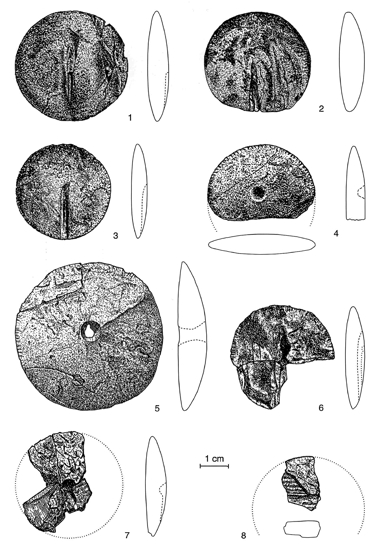 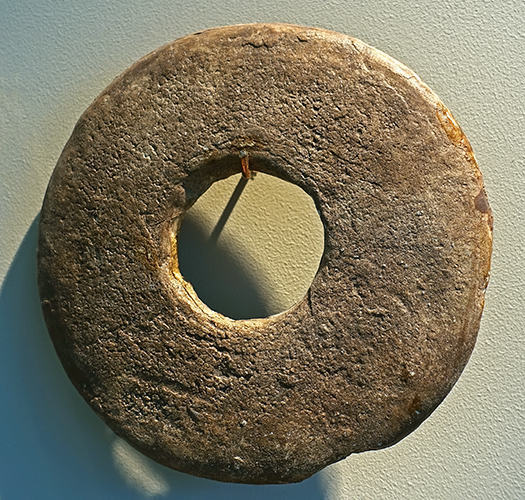 This ring of marl slate was split horizontally into two conjoining pieces.

The edges of the fissure are slightly rounded, therefore the artefact was probably already split in prehistoric times. There are red spots and dendrites on the slightly convex dorsal side, while the other side is slightly concave. 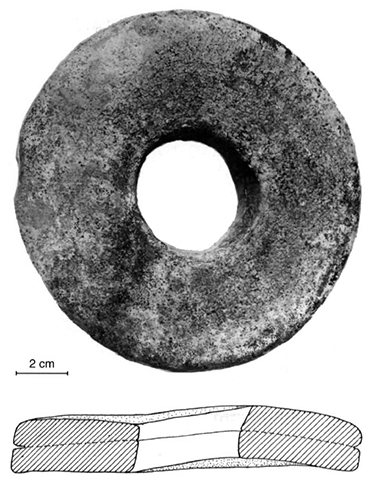 The outer periphery forms a smooth facet, and the slightly conical aperture is positioned rather eccentrically and non-axially - it forms an angle of about 80 degrees with the surface of the disc.

There are traces of abrasion at places in the aperture, running vertical to the surface of the ring, perhaps the result of having been suspended. 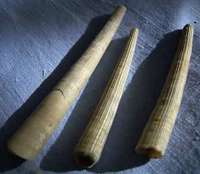 Dentalium badense fossil shells. Their modern descendants are still highly prized as jewellery, and are commonly used by Native North American artists. They are often referred to as tusk shells or tooth shells, and are used in indigenous jewellery and personal decoration in Western Canada and the United States.

At Brno Francouzká Street, the cranium and partial postcranial skeleton of an adult male was found covered by a mammoth scapula and tusk and possibly by rhinoceros ribs, in ochre stained sediment within the sandy deposits of a river terrace, a similar situation to the Dolní Věstonice and Pavlov settlements. A direct AMS 14C date of 23 680 ± 200 BP (Pettitt and Trinkaus 2000) established without doubt the Pavlovian context of the burial.

Approximately 600 Miocene Dentalium shells (probably more originally) were recovered in the vicinity of the skull (probably pat of headgear) and other finds associated with the burial include 14 carved roundels of mammoth ivory probably lying close to the head, tooth, bone, marl and haematite, some bearing fine engravings around their edges; a large ring of slate split horizontally into two in antiquity; a reindeer antler worn or polished at the tips, a mammoth ivory marionette, and a worked cylindrical fragment of ivory, probably from another object (Oliva 2000a, b).

The 2 metres surrounding the burial was excavated, yet no trace of prosaic objects or charcoal was found, although this was in 1880 and the 'search' was relatively limited (A. Verpoorre pers. comm.). The bones were stained red with ochre. Oliva (1996, 2005, 79) has suggested that this should be treated as the deposition of ritual objects, among which were the bones of the adult male. If this is correct, it reorients our view of Mid Upper Palaeolithic burials: they become 'ritual deposits' similar in nature to deposits of other materials on Pavlovian sites, notably the remains of mammoths, reindeer, foxes and wolves, in association with cultural items. Oliva (1996, 2005, 79) has likened the roundels to the discs worn about the body by Siberian shamans, the marionette to witch doctors' puppets for catching ghosts, and the reindeer antler with a worn tip to a drum stick, in short, the accoutrements of shamanism.

It is not the place here to discuss whether this is an appropriate interpretation, although the non-prosaic and ritual nature of the deposit and objects is without question. Oliva (2000b, 149) has discussed the 'odd' nature of the burial. Unlike other known Pavlovian burials it was not interred in or on the periphery of an occupation site but apparently alone on the floodplain of a river and away from the main concentration of Pavlovian settlement in Moravia, and the skeleton bears considerable evidence of pathology (periostitis) which has been taken to mean that the man 'must have been in considerable pain for years' (ibid., 149), although there is no reason why this condition need cause any pain and such inferences may be premature (A. Chamberlain pers. comm.). This question, however, does not detract from the apparent isolation of the deposit. 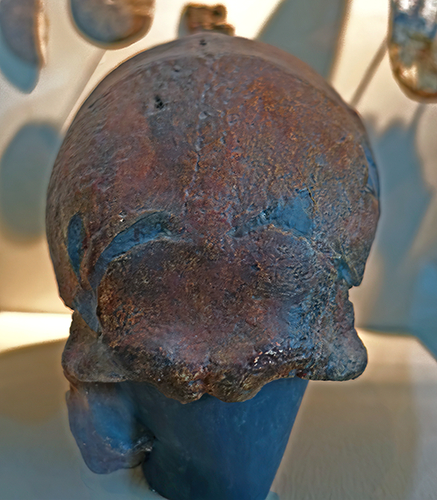 The top of the skull of the Brno Shaman.

The man was about fifty years old, quite old, most people of that time did not live so long, and the skull bears numerous cuts, probably from excarnation, the ritual removal of the flesh and skin.

Among the preserved Brno II human remains Jan Jelínek had paid special attention to the Brno II cranium. The original reconstruction made by Makowsky was rather distorted and due to this the cranium was designated as postmortally deformed. Jan Jelínek prepared a new and much more precise reconstruction which has proved that the cranium was not deformed postmortally, but due to imprecise reconstruction. The neurocranium originally consisted of two parts of frontal bones, two parietal bones, the squamous part of occipital bone (lacking opisthion), a part of the left temporal bone with processus mastoideus, a zygomatic arch and a part of temporal squama. On the right side of the neurocranium only a part of the temporal bone has been preserved with a processus mastoideus, a part of the zygomatic arch with crista supramastoidea. Only the right zygomatic bone, fragments of alveolar and palatal processes of the maxilla with five teeth, and an incomplete left part of the mandible with processus mentalis have been preserved on the splanchnocranium. 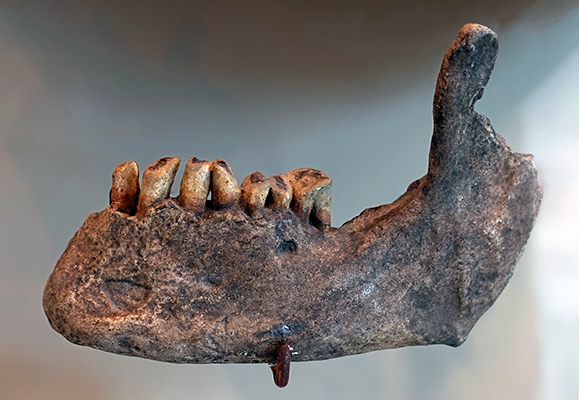 Part of the mandible of the Shaman, with five teeth. 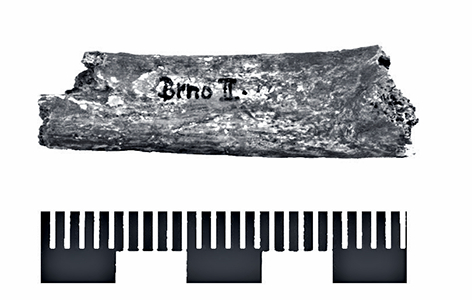 Left clavicle – diaphysis, central part of the bone, back view.

Anatomical reconstruction of the left clavicle.

(right) Anatomical reconstruction of the ulna. 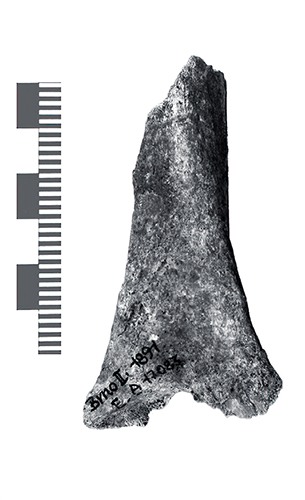 (left) Distal part of the right humerus, back view.

(right) Anatomical reconstruction of the distal part of the right humerus.

(right) Anatomical reconstruction of the of the right femur .

(right) Anatomical reconstruction of the of the left femur . 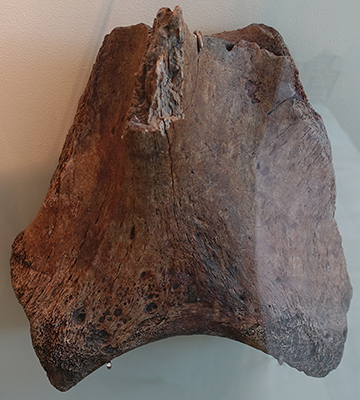 This Wooly Mammoth scapula was used to cover the body.