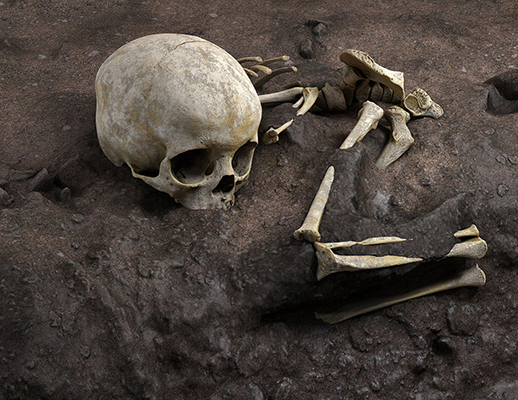 Gemma Conroy writes (at https://www.abc.net.au) that the Middle Stone Age grave of a three year old child who lived 78 000 years ago has been found in a cave in Kenya. In a paper in the journal Nature, Martinón-Torres et al. (2021), the researchers who studied the fragile, ancient remains described how its head appeared to have been laid on a pillow. Scientists have named the child Mtoto, meaning 'child' in Swahili.

The international team of archaeologists carefully cast the entire grave in plaster in order to preserve the arrangement of surviving bone fragments. This enabled them to transport the body safely to a laboratory for detailed study. 'It was like excavating a shadow,' said Prof María Martinón-Torres, director of Spain's National Research Center on Human Evolution. '[When we moved the cast], we didn't know we were carrying a child in our arms,' she told the BBC's Inside Science program.

The researchers were able to study the teeth to confirm that this was the tiny body of a human child - between two and three years old. Scans revealed that the body had been laid in a fetal position, and the bones had moved in a way that suggested it had been wrapped tightly when buried, with its head originally resting on something like a cushion of leaves, which subsequently decomposed.

Further examination of the size and shape of the bone fragments led the researchers to conclude that Mtoto was most likely a boy. 'He was buried in the cave - where the people lived,' Prof Martinón-Torres said.

'The next oldest grave in Africa is about 74 000 years old," explained Dr Louise Humphrey from the Natural History Museum in London. 'Interestingly, that was also a young child, but it was poorly excavated about 50 years ago, so we don't know much about it.' 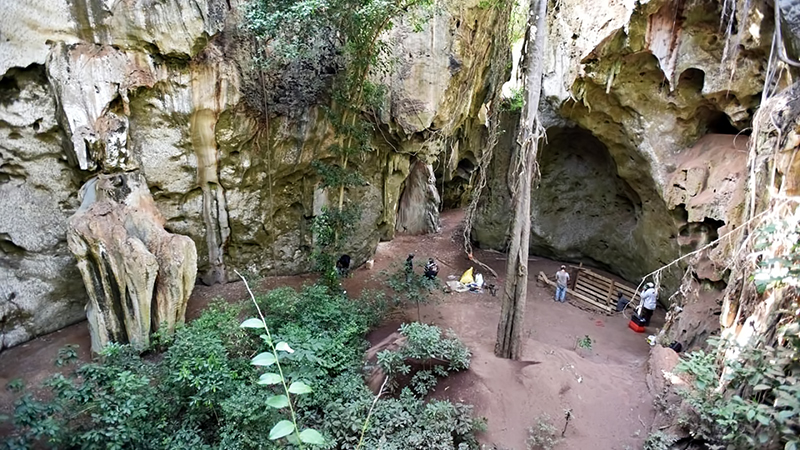 Ten years ago, Nicole Boivin, director of Germany's Max Planck Institute for the Science of Human History, traveled to Panga ya Saidi, a network of caves in the Rift Valley, less than 10 miles from the shores of the Indian Ocean. Boivin was hoping to better understand the trade routes established by East Africans 2 000 years ago. 'As soon as we got to the site, we could see it was special,' Boivin says. Most of the cave roofs had collapsed, and the interior, open to the sky, thrived with flora and fauna. Making her way from one cave to the next, Boivin found enormous and well-preserved pieces of pottery from the Iron Age, which extended from about 200 AD to 1000 AD. 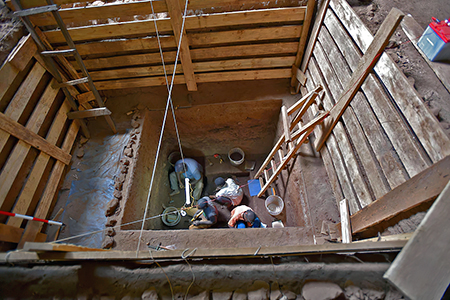 Mtoto's remains were found at the bottom of this trench at Penga ya Saidi in 2017.

( The results of the investigation into these remains were not published until 2021, indicating the long, complicated, and painstaking research which took place - Don )

But things got a lot more interesting in subsequent years, when the team reached a layer containing tools and beads made from shells (one bead was the oldest ever found in Kenya), along with a piece of charcoal from 20 000 to 30 000 years ago. Eventually, they found stone tools dating back 78 000 years. At layers dating to 67 000 years ago, the tools are smaller, reflecting a change in technology that marks the start of the Later Stone Age. 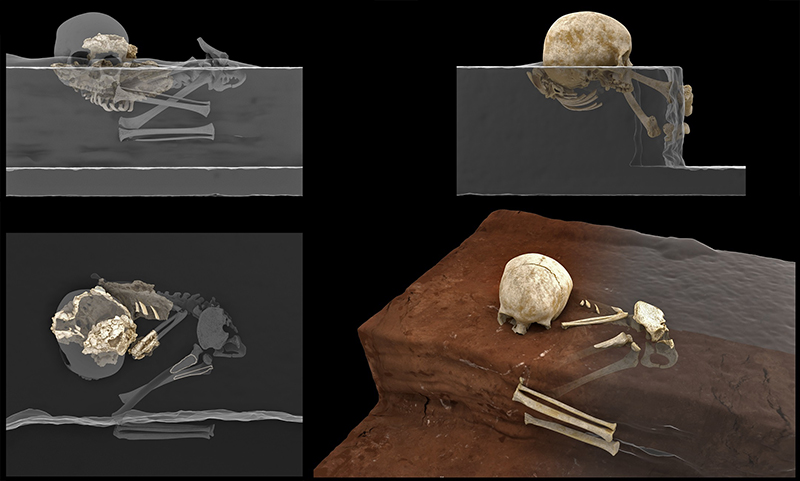 A digital reconstruction of the child's remains as they were found at Panga ya Saidi.

By analysing the teeth, the researchers were able to confirm that the remains belonged to a human child who died when they were about three years old.

The team called the child Mtoto, which means 'child' in Swahili. c The fixed position of the bones and their connection to each other was a clear sign that the body had been buried deliberately shortly after death, rather than by natural processes.

Mtoto's tilted head hinted that it once rested on some type of support that had perished over time, such as a pillow, suggesting that an elaborate funeral rite had accompanied the child's burial.

The team also found that the sediment in the burial pit was a mix of silt and sand, which was distinct from the surrounding soil at the same depth.

This indicated that the child had been covered in soil that had been dug from the surface of the cave floor.

Chemical analyses of the sediment also showed higher concentrations of manganese oxide and calcium oxide, signatures of bacteria involved in the decomposition process. 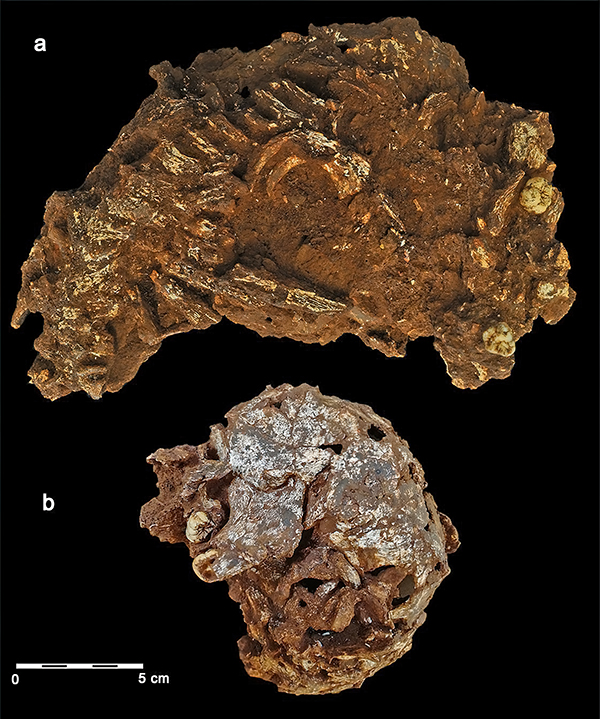 Mtoto's partial skeleton (upper) and left side of the skull and mandible (below). 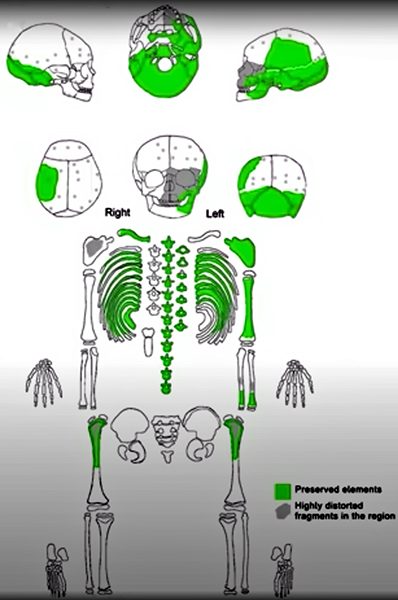 The spine was in strict articulation with the ribs, and the left arm and left scapula were in place, indicating that the body had been found in the place where it was originally deposited, and rapidly covered by soil which protected it from alteration or disturbance.

Photo and text: https://www.youtube.com/watch?v=IhTxK4uDMrk&ab_channel=CENIEH
Proximate source: https://www.nationalgeographic.com/science/article/childs-grave-is-the-oldest-human-burial-found-in-africa
Acknowledgement: The National Research Center on Human Evolution (CENIEH) in collaboration with the Max Planck Institute for the Science of Human History and the National Museums of Kenya, co-leads a study on the oldest human burial in Africa, dating back to 78 000 years old. 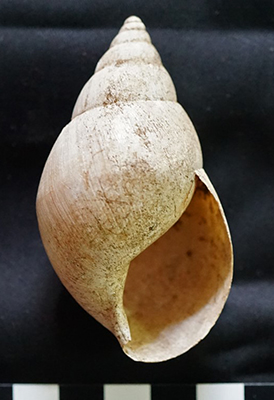 Broken shells of the giant African land snail were scattered in and beneath the burial pit. This example shown here is typical of those found throughout forests in eastern Africa.

When Dr Faulkner and colleagues took a closer look at the shell fragments under the microscope, they found evidence that they had been cooked and eaten. The fragments found inside the pit were larger and better preserved, with one piece found next to Mtoto's skull showing deep cut marks. 'While we can't say this is evidence for decoration or symbolism, it shows modification by people,' Dr Faulkner said.