Also known as the Couple, the Double Figure, the Doublet and La Belle et la Bête (Beauty and the Beast)

The artist has carved two bodies, back to back, symmetrically arched, and joined at the top of the heads, shoulders and lower body. One represents a woman; the other could be an animal. A hollow space separates the two heads, suggesting that the figurine was used as a pendant. In profile and from the front, the woman's body exemplifies - crudely - the main anatomical characteristics of the Palaeolithic Venuses of Western Europe. The treatment of the legs resembles that noted for The Two-Headed Lady. Here too, the upper limbs are absent. On the head, incisions serve to set off the hair or headgear and, curiously, most of the face has been nicked. With its back to the woman is the other figure, which has elongated, sinuous anatomical features that are difficult to associate with any known genre. Although the torso and lower body offer limited detail for interpretation, the face brings to mind a beast -- real or mythical, we do not know. Carved on a fragment of greenish-yellow serpentine and highly polished, the piece is approximately 47 millimetres high. 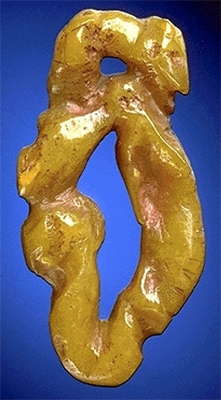 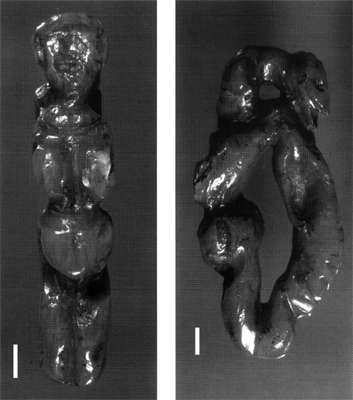 The Double Figure is the most complex part of the Grimaldi collection . This is a small pendant with a female representation back to back with that of an animal.

The two figures are attached at the back of the head, at the shoulders and at the feet of the female figure.

Little sediment remains after cleaning by Jullien. However, traces of haematite are visible under a microscope. A small amount of clear sandy sediment of fine grain is visible in the hollow of the knees of the female figure and in her mouth.

Discolouration in the bottom of some incisions appears to be due to Manganese dendrites often found in karst. The total length of this pendant is 47.2 mm and it is 23.2 mm thick. The width taken at the breast of the female figure is 10.4 mm. The weight is 11.42 g. The human figure has the head raised and a very arched back which allows the projection of the breasts and a very prominent abdomen. In profile, the head is flattened from front to back.

From the front, it is almond-shaped with a broad forehead and a high and narrow chin. The face, flattened, is framed by a series of finely chiseled features of the front to back through the temples. The face itself is unusual in the sense that it was purposely removed by chiseling. A small pecked out oval, which may indicate the mouth, has been partially shown. A line has been engraved on the neck just below the chin. Given the high quality of execution of the entire piece, it seems unlikely that marks observed on the face and neck are due to a mistake by the sculptor.

At the base of the narrow neck is an oval relief divided into two parts by a vertical incision (Fig. 16, No. 3). This is very similar to that observed on another figurine in the Grimaldi collection, the Woman with Goitre, kept in the Musée des Antiquités Nationales (MAN) at Saint-Germain-en-Laye. Below this can be seen a wide horizontal groove that creates a flattened area at the top of the chest. The breasts are cylindrical and hang down, but do not descend below the waist.

A little material is missing on the left breast. This is probably an accident during manufacture.

Identification of the arms of this figure is problematic. No arms extend down the sides of the torso as is often the case for the representations of females in the Grimaldi collection. It is possible that at the level of the shoulders, where the two figures come together, the two limbs coming down along the body of the animal are in fact the human arms. However, they are very thin, not necessarily in human form and placed in a high, unnatural position. They could be, just as well, the forelegs of the animal, and in this case the human figure has been portrayed without arms.

The abdomen, wider than the hips is protuberant. A navel is engraved in the centre. On each side of the abdomen, one can see a wide vertical line etched. The left line is more pronounced than the right. On the right side, there is a natural defect of the stone. The pubic triangle is rendered in detail, with a vertical incision representing the vulva. The buttocks are large but not as pronounced as for other copies in the collection because of the small space between the backs of the female and animal figures.

A vertical fold splits the buttocks, and the upper thighs are shown. The Double Figure is different from the other Grimaldi pieces, also because the legs are detailed. In profile, it seems that they are strongly bent, and the feet are close against the buttocks. Details of the ankle and foot are shown on the right, but are more schematic on the left. Always seen in profile, the body of the animal is attached at the feet of the woman. Looking at the animal figure from the front, and therefore at the back of the human, the legs are more ambiguous. The incision that separates the two legs does not extend beyond the knees and thus the demarcation between the legs and the feet is not obvious.

The animal in this piece has a detailed head but a stylised body, difficult to interpret. The head is not attached to the body by the neck, but by a piece of material between the back of the animal's head to the female body. The muzzle is long and pointed with tiny incisions at the end indicating the nostrils (Fig. 16, No. 4). Eyes, two small circular holes, are towards the back of the head. An incised horizontal line marks the top of the face. Two small triangular ears are engraved at the top of the head. The open mouth extends all along the muzzle. Small superficial holes are placed at the corners of the mouth and on the lower surface of the jaw (in the mouth of the animal).

If the head and body are one and the same animal, the head is very much projected beyond the shoulders, in an anatomically unrealistic position. The body of the animal is in the same stance as that of the female figure. Seen from the left, this is mostly a curved and irregular cylinder, with sixteen incisions across it, placed diagonally at irregular intervals. The deepest of these incisions is directly under the head and seems to be the dividing line between the realistic face and its more stylised body. The forelimbs, as described above, seem absent.

There is no representation of the tail or hind legs. A wide and deep vertical groove descends to the lower part of the body. To the right of this line, the piece is heavily abraded and has no detail. The identification of this animal remains problematic. If you look closely the face it is more a mammal than a reptile. In fact, the head is probably of a carnivore. A long snout, large mouth, triangular ears and eyes set at the top of the head are typical of carnivores. This very elongated snout seems to preclude the idea of ​​a cat. A canid (fox or wolf) is possible, as is a mustelid (marten or badger). If the elongated body is the same animal as the head, a small carnivore (canine or mustelid) seems the most plausible representation.


Text above translated and adapted from: White et Bisson (1998)