The Venus de Tursac is a calcite figure from 25 000 years BP. It was discovered on 5th August 1959 by M. Henri Delporte at Tursac, a village in the Perigord, near Sarlat, in the summer of 1959 at 'l'Abri du Facteur'. It is a treasure, a figurine made ​​from a block of translucent calcite measuring 81 mm high, and weighing 57.4 grams. While it lacks a head, arms and breasts it is still a very rare and important find. 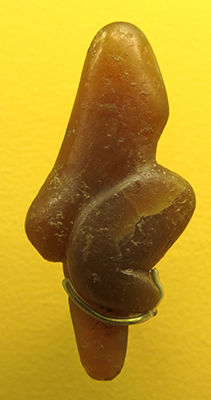 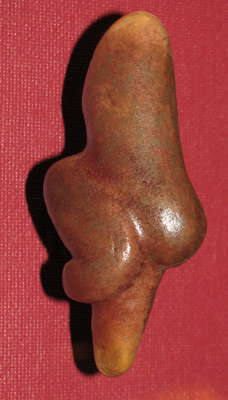 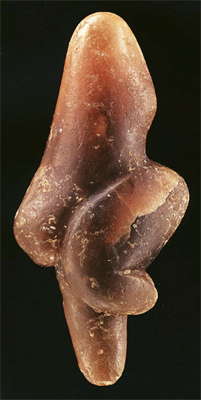 Discovery of the statuette

On Wednesday, August 5, 1959, at 9 am, Mr. Robert Antoine-Charles, working under the direction of Mr. Henri Delporte, a professor at Montbrison (Loire), had begun the digging up of slabs from the sterile layer above the red coloured archaeological layer which is the subject of studies undertaken this year, following the sondage 72 in 1958.

Below slabs cemented by deposits of calcite and linked with yellowish clay, M. Antoine found something interesting, and after washing it turned out to be a female statuette. It was in the archaeological layer containing small slabs bearing traces of red. The object was located in square 81.

The location with respect to the control point, a zero engraved in the wall of the shelter are: depth 25 mm, longitudinal distance 3180 mm, transverse distance 670 mm SE. Distance perpendicular to the wall, 180 mm.

It is a statuette of a conventional type in yellowish light brown, translucent, with dimensions:

The head is of subconical shape, with a flexed position, protruding belly and buttocks, arms not shown, thighs and legs clearly shown, heels slightly apart, and at the base, an appendix on the nature of which we are reduced to speculation. 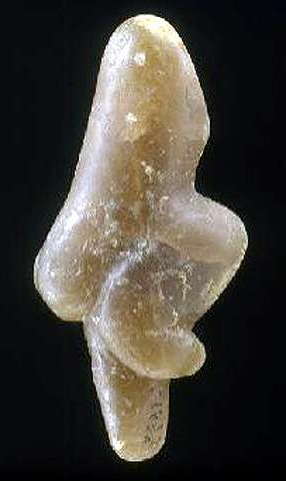 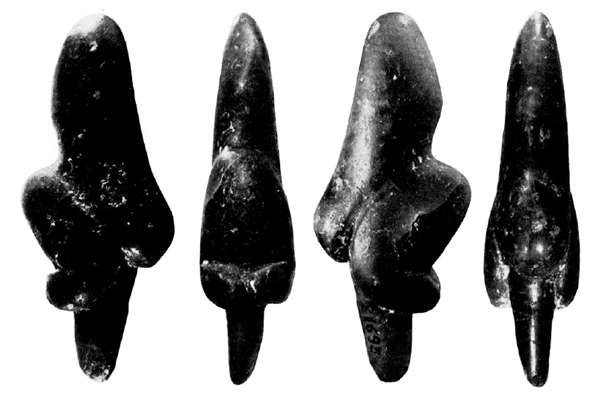 (Note that there is a cone shaped appendage sticking down between the legs. I think this may be as a support for the venus. The appendage could have been pushed into soft earth, allowing the venus to be upright, with the legs folded at the level of the ground - Don)

Source: facsimile in the Venusium, a museum at Willendorf in Austria. 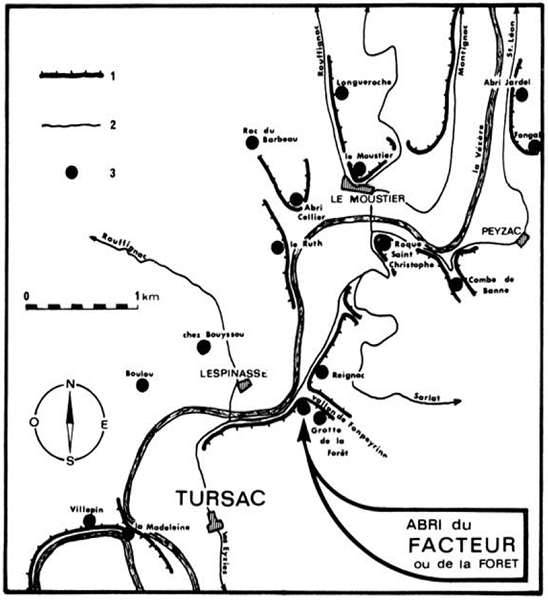 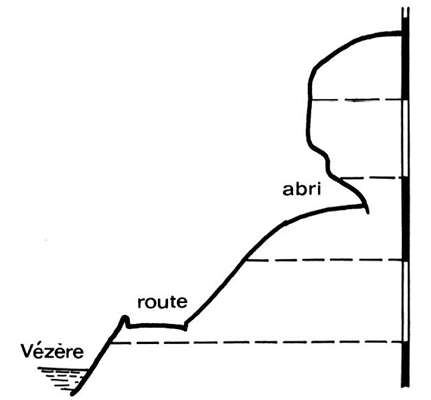 Profile of the abri du Facteur (or l'abri de la Forêt), showing the relative positions of the Vézère River, the road beside the river, and the abri itself. 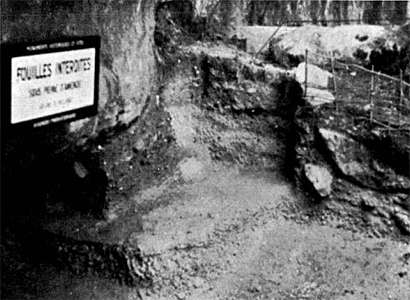 Overview of the shelter in 1961, after the finish of excavations. After 1961, the part of the cliff on which the control point was located collapsed. 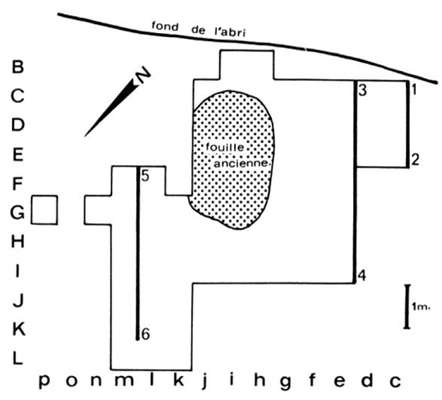 (There appears to be no satisfying english word for coupe, where a vertical surface is cut in an excavation, allowing a profile of the excavations to be recorded. Similarly, 'gisement' is a more elegant term than 'archeological site' - Don) 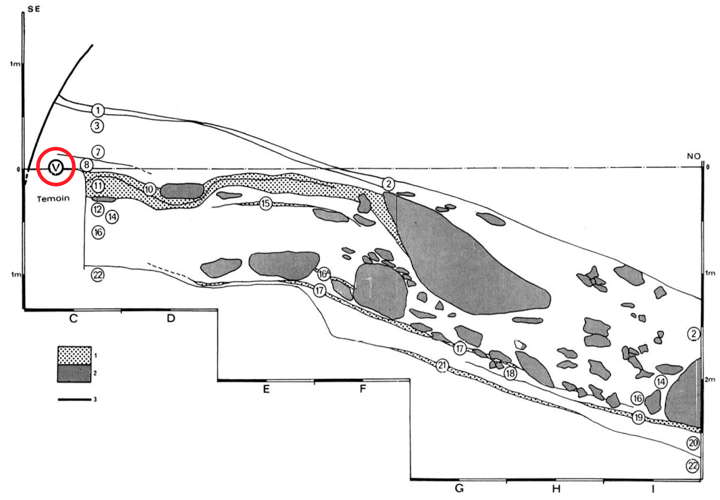 Coupe 3-4 of the general plan above.

The Venus of Tursac

In 1959, at l'abri du Facteur, Tursac, Dordogne, H. Delporte (Delporte 1959, 1960, 1968)found a pebble of amber coloured calcite transformed into a female representation. This statuette (MAN 81693) is precisely dated to the Gravettian:

It is 8.1 cm high, roughly the same size as that of Milandes. It has the same smooth contours, partly natural, and the same arched back. In addition, some researchers (Delporte 1960, 1968)saw a phallus in the part of the statue which goes down between the folded legs. We undertook microscopic analysis of the Tursac Venus. Apart from a few very fine and superficial scratches on some of the surfaces and streaks of scratching from the erasure of marking ink, this statue shows an almost complete absence of evidence of shaping. 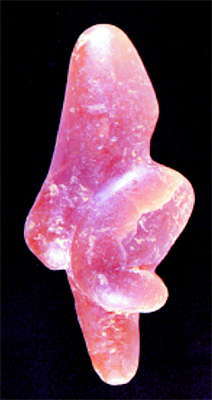 Yet she was found in a rock solid context, and the form also leaves no doubt that this is a prehistoric sculpture. It was formed almost solely by abrasion and polishing. and not, as we assumed, by the techniques of scraping and cutting with flint tools. We were especially struck by what could be taken (to the naked eye) for incisions which put in relief, for example, the thighs against the abdomen. But in fact these are not incisions in the usual sense, made with a sharp flint. Rather, the grooves were created by an abrasive tool to round the contours. The method used was more like that of a file. The base of these grooves bear no streaks of abrasion, but sometimes we see the intersection of two distinct furrows (Fig. 27) as if there was a change in the angle of application.

Reassuringly, we see precisely the same thing on the statue of Milandes (Fig. 16) In short, if this object was found in a field outside an archaeological context, it could not seek to verify its authenticity by the marks of flint tools. It would have to be identified, or not, by its form. 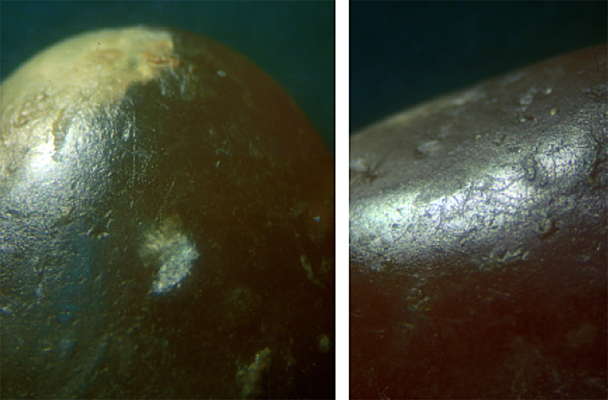 Fig. 26 - The surface of the Venus of Tursac. Traces of polishing are nearly absent and when they exist, they are extremely fine and superficial (6.4x). 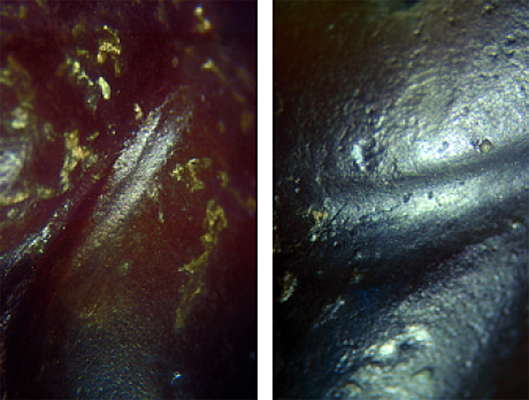 At left, the limit between the abdomen and the left thigh. Two converging grooves are visible.

At right, details of the grooves showing the rounded and featureless bottoms.

The finding of the Tursac Venus

The scene is Tursac, a village in the Perigord, near Sarlat, in the summer of 1959. A teacher is on vacation, but he visits with his son and some friends, an excavation at 'l'Abri du Facteur'. The initial findings are encouraging: flints, bones of horses, reindeer and even rhinoceros. Men lived there, a long time ago.

And on August 5, a rock like no other was found. If you look closely, it is a treasure: a figurine made ​​from a block of translucent calcite. It measures 8 cm high and weighs 57.4 grams. It is a woman, a 'prehistoric Venus.' Alerted, the Abbé Breuil hurried to give his opinion. This leading expert said it was a nice discovery. While it lacks a head, arms and breasts it is still a very rare piece. It is about 25 000 years old, and belongs to the Upper Perigordian. The world knows only a few such venuses, and only a dozen in France. Congratulations to the finder! 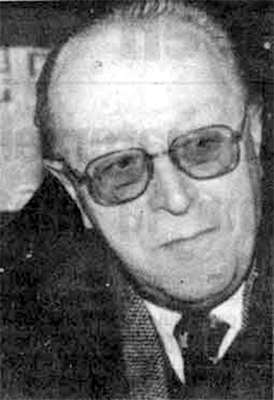 The finder was M. Delporte, archaeologist, professor of history and of Montbrison adoption. Henri Delporte was born in Tourcoing in 1920. He was first a teacher and professor at Arras. From 1950 he was a popular professor of history at the collège de Montbrison. His wife was a teacher at Lézigneux. Passionate about prehistory, he spent his spare time with many excavations in Forez and elsewhere. He became a member of La Diana Société Archéologique et Historique du Forez.

The discovery is an important event. La ville de Montbrison feels very proud. Henri Delporte is thrilled. The local press talked about it extensively. The Professor admits that it is 'The discovery of my career.'

With great care, the Venus of Tursac began a long journey. It was housed for some time wrapped in cotton wool in a small box in the Delporte home, Avenue de la Liberation. Then it caused a sensation among experts at the Congress of Archaeology in Monaco. In October 1959, it was presented in Paris, at the Comité des Conservateurs.

It also appeared as a postcard. A triumph! The experts of the Conseil des musées examined it with care. It was moved to a safe at the Louvre. Because of the figurine, Henri Delporte met Abbé Breuil who was then the 'Pope' of archeology. Finally, the statue was moved to Saint-Germain-en-Laye, the Museum of National Antiquities, where it is now. 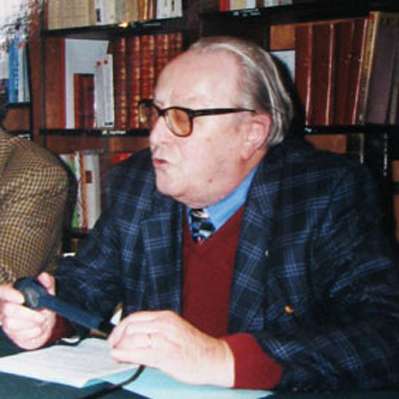 As for its discoverer, he did not stop there. In 1961, Mr. Delporte was appointed to the Centre National de la Recherche Scientifique. In 1965, he joined the board of the Diana Society. In 1966 he was curator at the musée des Antiquités nationales, in Saint-Germain-en-Laye. Then in 1984, he became Director, and finally in 1985, Inspector General of the Museums of France.

He wrote a very large number of scholarly publications. Then Henri Delporte had an active retirement until his death on 13th May, 2002. The little Tursac goddess had deflected a career. The little professor had become a great pre-historian. 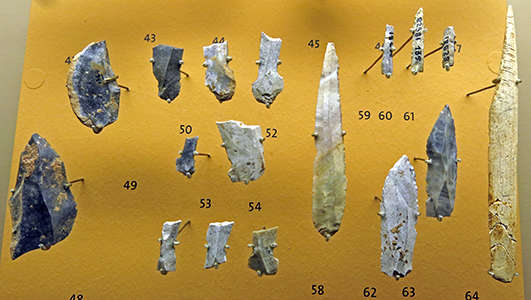 50 to 57: Burin de Noailles, a small multiple burin characteristic of the Gravettian. These flake tools have been restruck and refined to give several chisel-like edges and a blunt, grippable rear edge. 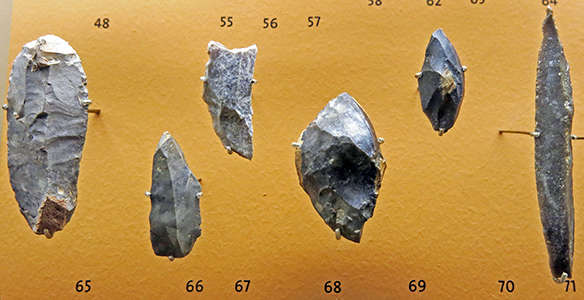 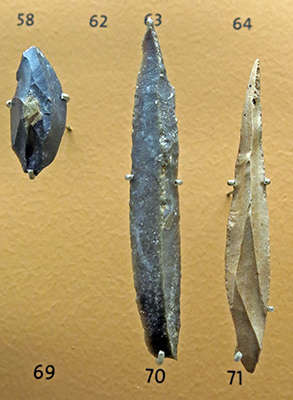 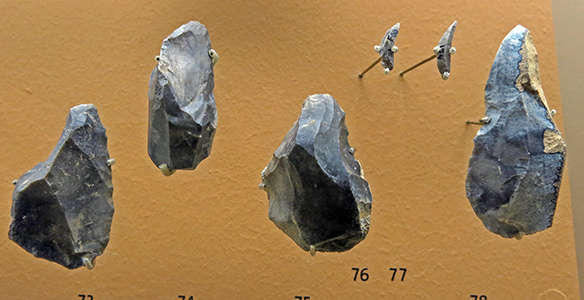 72: Grattoir double, tool with a scraper on each end.

76 and 77: Lamelle dufour. These are specific to the Aurignacian, and are finely retouched on the edges, on one or two faces. 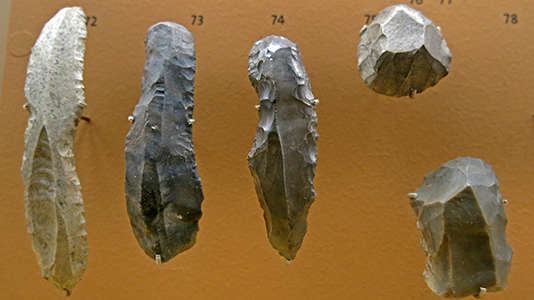 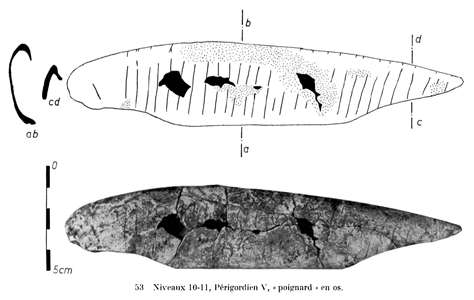 A large bone implement was found near the Venus, in the red level. 210 mm long, it was carved from the hind cannon bone of a reindeer, part of the epihysis has been preserved to form a rounded end.

The body of the piece is covered with oblique parallel stripes, fairly regularly spaced. There are also short, regular incisions on the back of the object, that is to say on the top edge. It does not seem possible that this piece was a knife, because the middle part with its two edges (see profile) is not suitable for this purpose; it is possible that it is a kind of dagger, since used in this way it fits well in the hand. 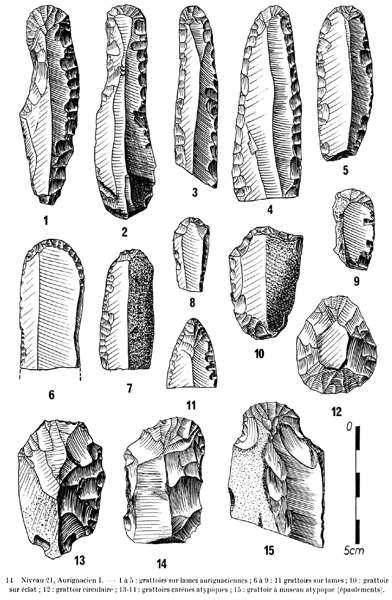 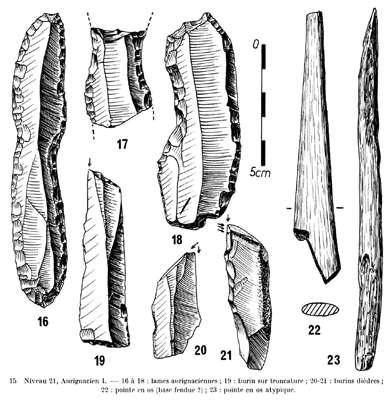 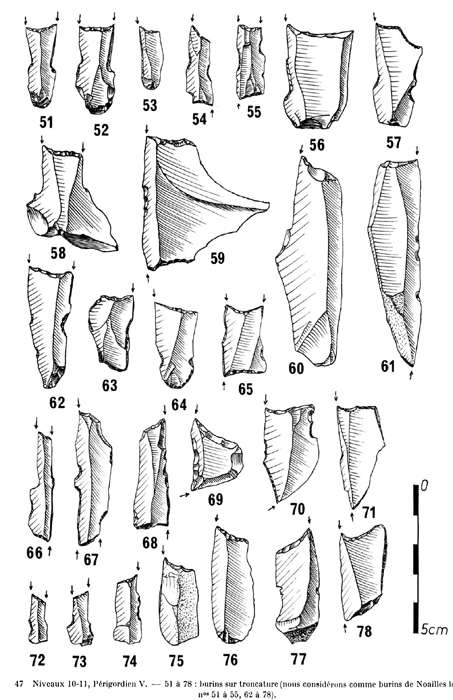 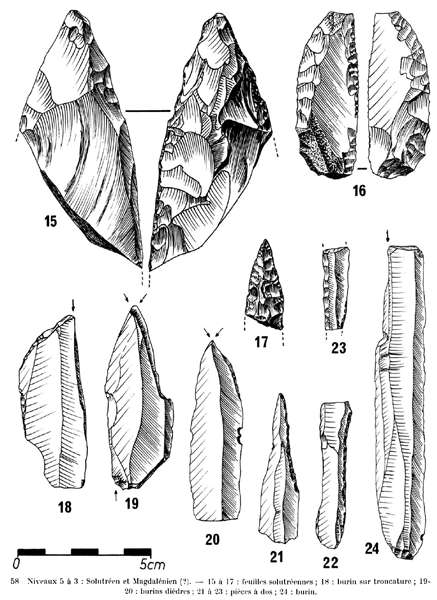