La Magdeleine des Ablis is located near Penne, in Tarn, 44.073822N, 1.700371E . It gets its name from the nearby small chapel, Chapelle Sainte-Madeleine des Albis, commune de Penne. Since the cave is only 18 metres deep, there is light even at the place of the female engravings there. The engravings and sculptures were found in 1950 by M. Bessac. There are two exceptional bas-reliefs of reclining women, true odalisques, One of them seems to be associated with the engraving of a bison, the other is on the opposite wall, they face each other across the chamber at ground level. Dating has been proposed for the engravings as being circa 13 000, but this may be too young a date. Moreover, the works are not homogenous, and a considerable period of time may have elapsed between the engravings. 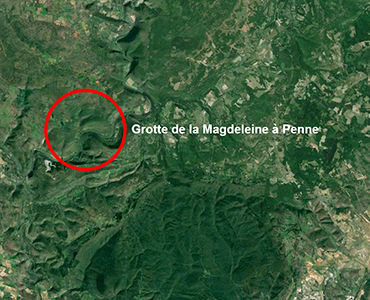 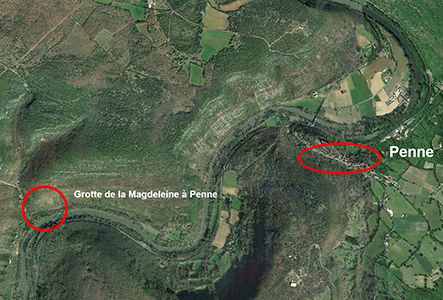 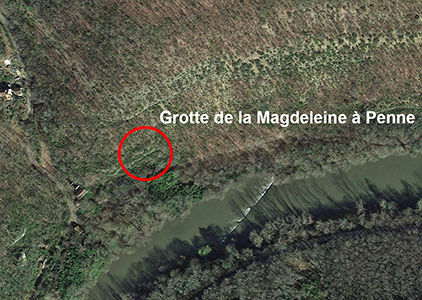 The entrance to the flooded section of the cave is accessed via the bamboo forest on the edge of the river, which may be identified in this photo by its pale green, vibrant colour. 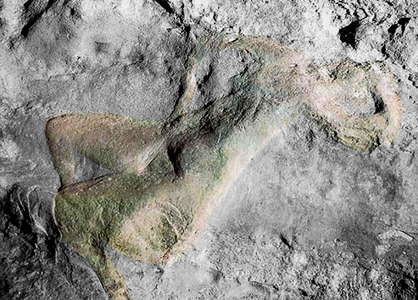 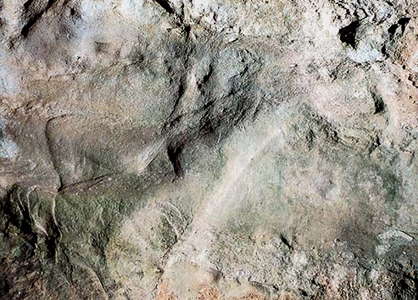 Reclining female figure on the wall at La Magdeleine des Ablis. Her arms are extended, and the left leg is crossed over the right, with the left knee obscuring the right ankle. Large breasts and a pubic triangle are shown, but no face. 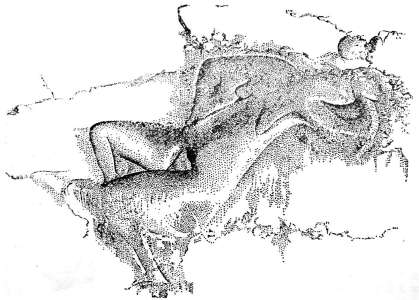 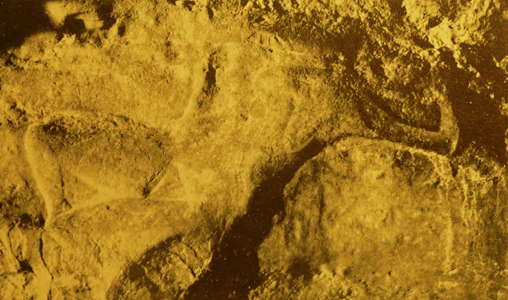 Another version of the reclining nude, left wall. 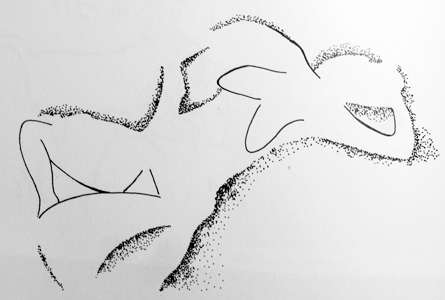 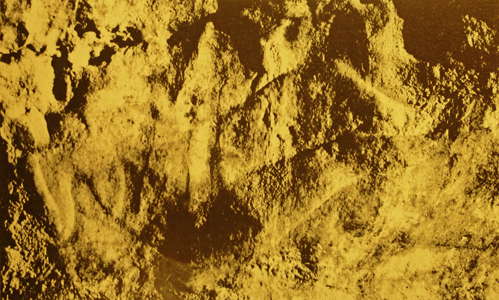 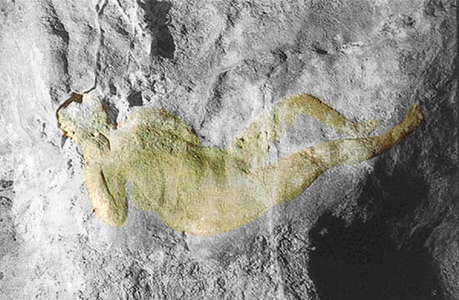 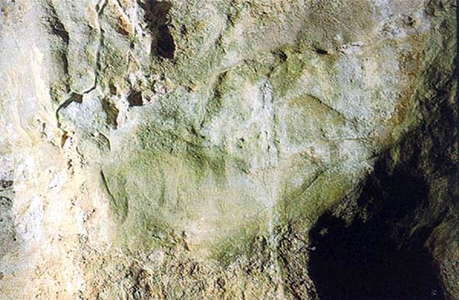 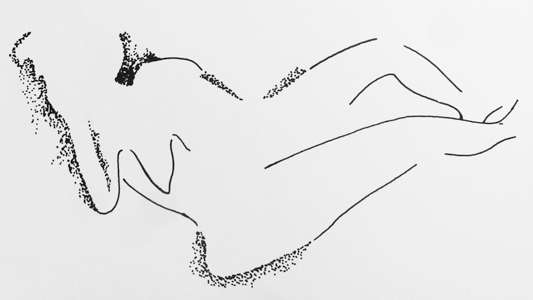 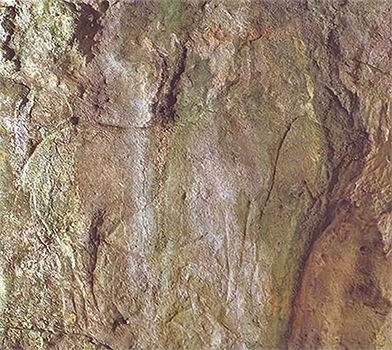 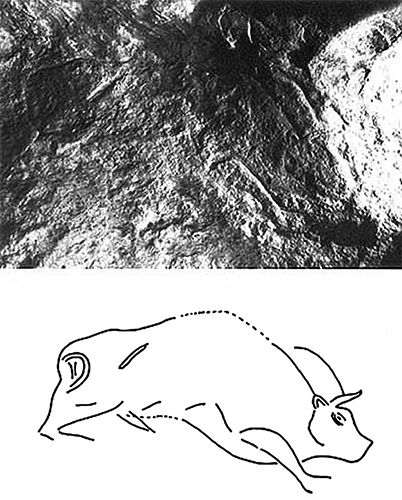 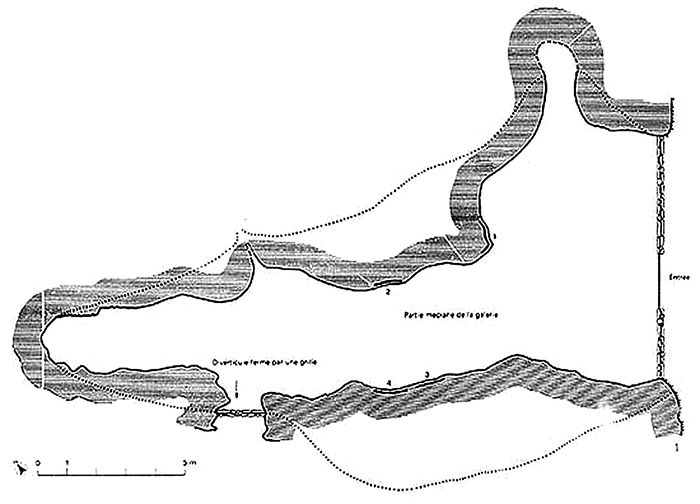 Plan of the cave containing the artworks.

Profile of the cave, South - North.


Description of the cave network:

La grotte de la Madeleine is located in the municipality of Penne in the department of Tarn. The network consists of a top section which is above water, decorated with rock engravings depicting venus figures, symbols of femininity and fertility, unique in France, and a flooded section accessed by three pools at the top.

The Siphon 1 section begins in a beautiful bamboo grove on the edge of the Aveyron. The first part is 110 metres long, to a depth of 9 metres, and is tortuous, with many variations of depth and direction. The exit is onto a clay slope. It then accesses a chamber, 10 metres high above the basin of Siphon 2 and its famous rock sill. The basin is beautiful. With a base of -4 meters, one follows it through a narrow rocky passage that provides access to a gallery which is easily followed to its end whose cross section is 4 by 4 metres. The terminus is also very clayey.

After about 20 metres there are a few chimneys explored by Philippe Rabatel. The route then descends gradually with slight changes of direction but remains constantly facing north. The flooded area totals 800 metres in length, and for the second siphon the total length is 660 meters to a depth of -73 metres.

( Text above is by Pascal Bernabé, a highly skilled and experienced diver in caves and in open water, and comes from his web page: 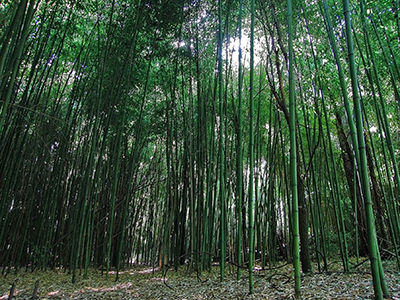 This is the bamboo forest on the banks of the Aveyron River, which provides access to the entrance of the underwater sections of the cave.

An account of the dives necessary to explore and map the cave may be found at http://www.plongeesout.com/explorations/france/madeleine%20tarn/madeleine%20tarn%20recit%20bernanbe.htm

( readers should note that the research which has produced this excellent profile is very dangerous, and requires highly skilled and well prepared divers to reach such a depth. Nitrogen narcosis sets in at around 30 to 40 metres below the water level in contact with air. At or below this depth the dive becomes what is known as a technical dive, and only very fit, highly experienced, trained and certificated divers should attempt deeper waters. They must carry more than one cylinder, containing different gas mixtures for the distinct phases of the dive (descent, bottom, and decompression). These different gas mixtures may be used to extend bottom time, reduce inert gas narcotic effects, and reduce decompression times. - See more at: http://www.scubadivingfanclub.com/Diving_Risks.html#sthash.SJhZu3oS.dpuf - Don )

La Magdelaine is a small hamlet near the town of Penne, separated from this picturesque village by the narrow and torrential bed of Aveyron, which from time, forms pools which are suitable for small boats.

It is three or four kilometres upstream from Bruniquel. M. Vesperini, a retired captain, had acquired some houses in this abandoned hamlet to spend the summer with his family, beside one of these ponds.

This last summer, one of his friends, M. Bessac, an Algerian official, came for a few days and visited the entrances of caves piercing the steep south facing escarpment, overlooking the hamlet.

He discovered several figures in low relief which were shortly after examined by the Director of the Southwest Prehistoric Antiquities Association, M. Méroc.

This inspection was completed on the 20th July, and he immediately informed me of what he had seen: a rather fine horse, in low relief, and extraordinary female figures lying down, also in low relief; he invited me and the Minister for the Department of Fine Arts to come to check this exceptional discovery and give my opinion on the antiquity of these figures, which he personally considered authentic.

Thus I was conducted by MM. Méroc, Bétirac, Gueret, Darras and others from Montauban and Toulouse, to the grotte de la Magdelaine, on the 20th October last, and it is on behalf of M. Méroc and the discoverer, M. Bessac, that I come, on your invitation, to discuss it with you.

The entrance is high up on a steep slope, 20 metres above the river, and is about 6 metres wide. The entrance lights a passageway twenty metres deep, with a width of about three metres. A passage continues further into the hill, but it is quickly clogged with a great deal of rubble.

To the left, a vertical shaft communicates on that side of the passage with a similar cave situated above. At six metres from the entrance, fully lit, are the figures, two on each side, three or three and a half metres tall, symmetrically arranged.

To the right one sees first a very beautiful horse, its head turned towards the entrance, in light relief, about 80 cm tall. The style is excellent, similar to relief figures of the old Magdalenian from Cap Blanc and Angles (Vienne) and the upper Solutrean of Roc de Sers (Charente).

On the left is a bison, with its head turned towards the end of the passageway, with the tail brought round onto the rump, the horn in profile, which is quite degraded by weathering. It appears to be from a second cycle of the parietal art. On the horse mentioned above we can see some very old calcite concretions.

The patina is absolutely uniform, and covers the entire wall, except for similar other flows with respect to the bas relief sculptures of the women, and there has been no recent change to it. Yet nearly the complete outlines of the animals mentioned here are carved at the expense of a projecting horizontal band of rock, with the two women closely adjacent to both the animal figures and slightly behind them.

Each of the two women are completely naked, breasts shown, leaning on one arm; the legs of the right are elongated, those of its partner on the left are bent and divergent, the genital triangle is strongly indicated, but not split, and the breasts are quite well-marked. The shapes are elegant and graceful; there is nothing of the Aurignacian - Perigordian style of steatopygous women. They are similar to the figurines found at Angles ( the venus figures of Roc-aux-Sorciers - Don  ) and represented, in ivory, by the incomplete statuette found by Vibraye ( the 'venus impudique' - Don  ) at Laugerie Basse.

Although unexpected, it is not possible to doubt the authenticity of these figures or their contemporaneity with the associated animals from which they are separated by only a few centimetres.

Their dimensions exceed 1 metre. The elevated position of the figures, and their unidirectional lighting, unchangeable because it comes from the outside, makes the examination of many details difficult, and undistorted photographs are impossible at the moment. The rock is Jurassic limestone, of lithographic quality, very hard, more or less layered, and white. The patina of the sheltered walls is grey, while the outside walls are more or less golden in the parts which do not receive any rain. A slash, probably made with a knife on a sculpted surface of the woman on the right, reveals the bright white limestone within, and the thin depth of the weathered surface.

Given these circumstances, no editing is possible, since any modern or recent erosion or change would be obvious from the patina, which grades uniformly from the sheltered part to areas degraded by the weather, and deception is not possible.

It is useless to indulge in speculation about the aims of such figures. Let us simply note that so far the dark caves have no high relief sculptures, and no clay modeling except for the Pyrennean caves, and we encounter there no realistic human representations.

The images of the sexual organs of the Aurignacian of the Dordogne, the Perigordian bas-reliefs of Laussel, those naked women with slimmer shapes from Angles and of the Magdalenian are located only in the illuminated portion of the ancient prehistoric settlements where daily life was ongoing, not in the dark corridors where one would go from time to time for ceremonial reasons.

M. Raymond Lantier drew attention to the differences that occur between the sheltered sanctuaries and the ones installed in dark caves. Only the first are adorned with sculptures. This new discovery extends to the south the area of open sanctuaries. 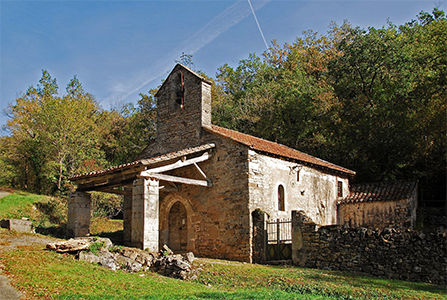 Chapelle Sainte-Madeleine des Albis, commune de Penne, the chapel after which the cave is named.