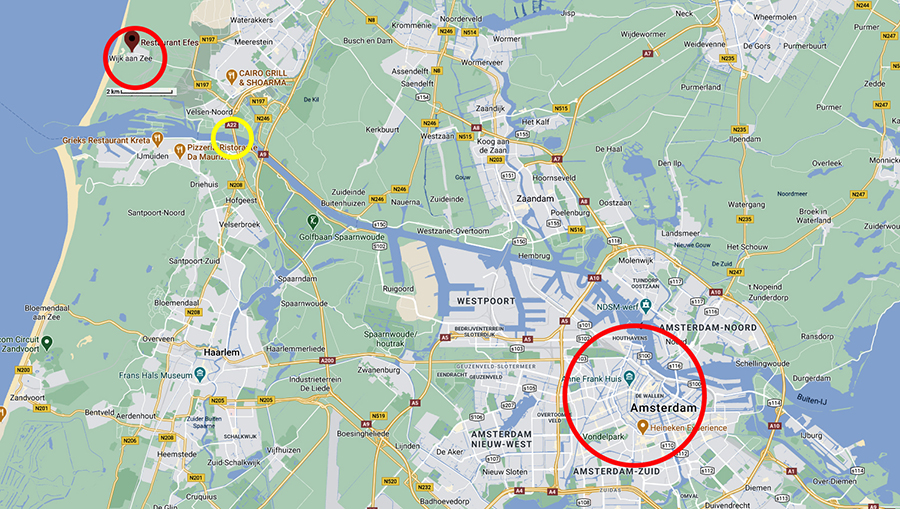 From Amsterdam to Wijk aan Zee

We packed and left the hotel room at 0830, and checked out. Bought a couple of train tickets and headed for Overtoom street in Amsterdam, where the MacBike Rental had surplus bikes for sale. We bought two, and were very happy with the deal. We still needed to get some tools and a chain for locking up the bikes. We packed our gear onto the bikes, and headed for the Haarlemerweg.

Stupidly we didn't have a map so we ended up deviating north to the North Sea Canal. The cycling was easy but my bum was getting sore, and it was hard to manoeuvre the heavy bike. We asked someone if we were on the right track. Near IJmuiden we took the punt across the canal and cycled towards Wijk aan Zee - an old fishing village which is now a seaside resort for Amsterdam. The punt was full of cyclists - a school group in safety vests, and a serious cyclist group in team gear - people on vespas - it was a sight to behold. 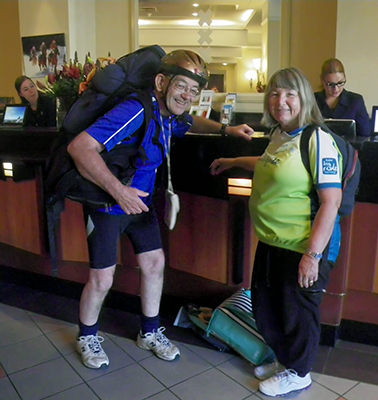 Leaving the hotel in Amsterdam, about to buy some bikes! 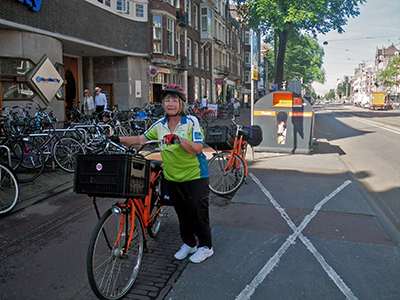 An hour later we had decided on these surplus bikes from a bike hire shop. They turned out to be fantastic bikes. We bought big black plastic boxes for the front of the bikes, they were so much better than what we had on the trip down the Donau. Anything extra got chucked in the box, but especially food and drink for lunches and other meals. 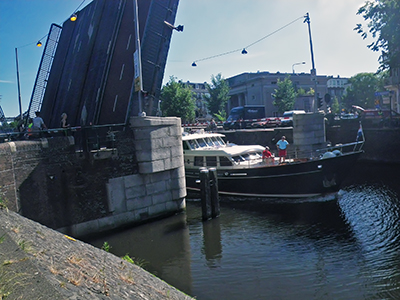 The water level of the canals of Amsterdam is close to the level of the roads, so swing bridges are a necessity when boats and car traffic both need access. 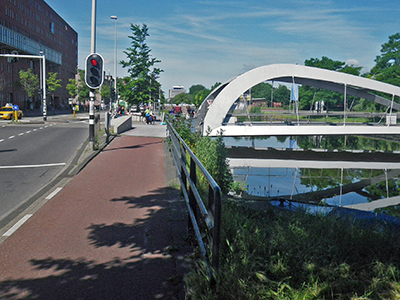 Some canals were not thoroughfares for boats, so ordinary bridges were fine. 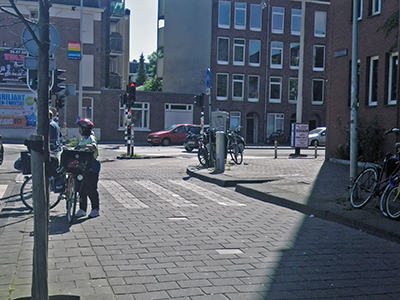 However we were still in civilisation, and it took a long while to reach the city outskirts. 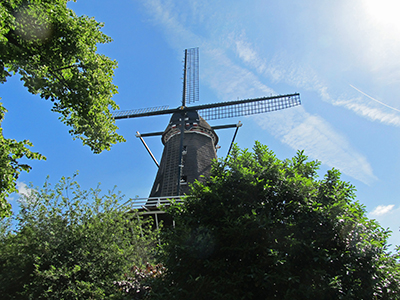 Just five minutes later, 45 minutes after leaving the bike shop, at last we were making progress in our quest to leave the metropolis. 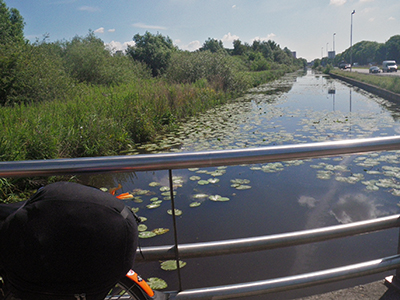 We crossed a number of canals, this one with waterlily leaves on the water surface.

Maria had bought panniers, while I continued to use my backpack on the back of the bike, as shown here. Each to his own, both of us thought we had the better deal! 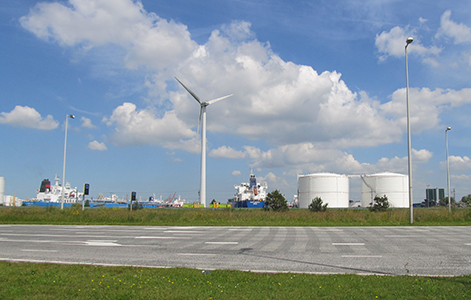 We began paralleling the main shipping canal in order to get to the punt across the Noordzeekanaal which exits to the sea, but had to make several detours away from it.

Necessarily, with poor maps, we did not take the most direct route. 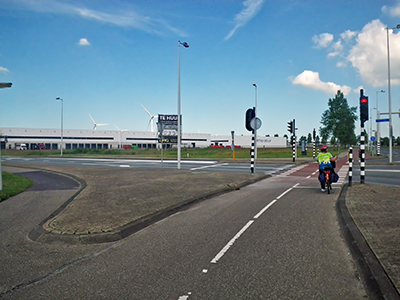 We desperately needed modern mobile phones and google maps, though we did not realise it!

We were still operating on old technology, paper maps, at this point. We had phones that could only make and receive calls, I had an old Nokia - indestructible, but not what was needed for this sort of trip.

The next year, in 2015, I made the switch to an iPhone with Google maps, and the trip I made in that year to Europe was a different experience entirely. 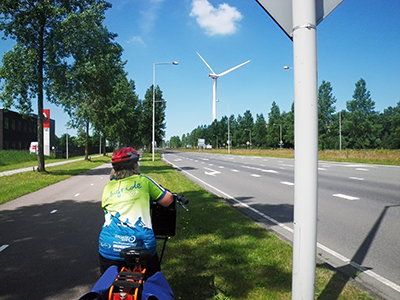 By this time, we were on fantastic cycle paths. The Dutch understand the needs of cyclists. 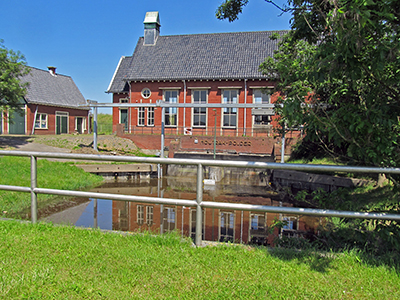 It is now mainly used for recreation and nature with grass and forest.

An hour later, Maria took this great panorama of the shipping canal when we finally got to its edge. 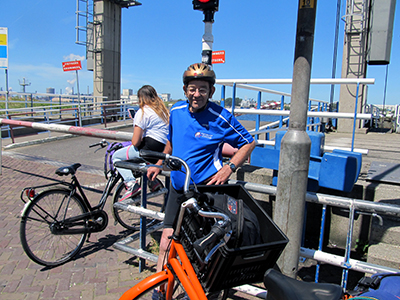 Ten minutes later, we were at the punt (pont) terminal, ready to cross to the northern side. The full name of the punt is 912 ferry (Direction: Velsen Noord).

I had bought some lightweight and easy care tshirts back home in Oz, and had them embroidered with a Donsmaps logo. They worked really well, they washed easily and dried very quickly.

I put my 'kangaroo' zip-on bag from my main pack into the box on the front, and this system was great. Nothing fell out, and it was easy to transfer from the bike to the tent or hotel. 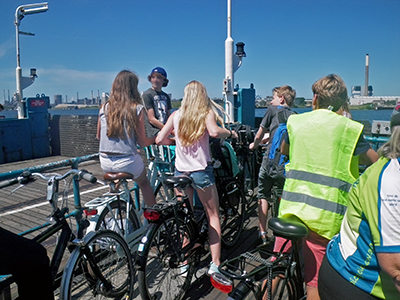 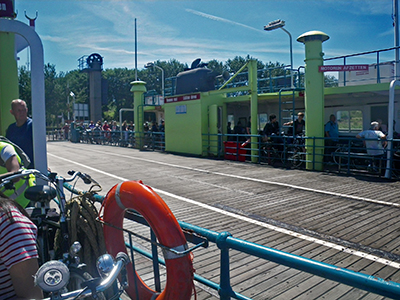 There was nobody except cyclists on the punt, apart from a couple of Vespas, though everyone else kept to the 'cyclists and pedestrians' section. 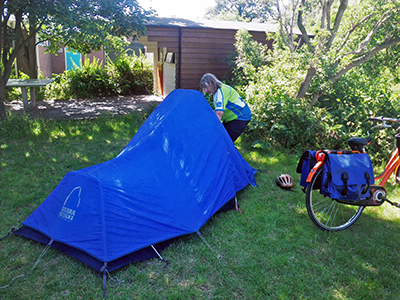 After crossing Noordzeekanaal on the punt, we decided to look for a camping spot for the night. We found this one only a few kilometres away at Wijk aan Zee. It was a basic camping area, but just what we needed, and it was good to set up the tent on some well tended grass. 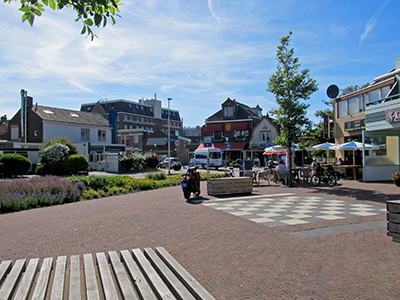 At Wijk aan Zee we found a camping place - basic, but enough, for €15.90. The lady who ran the place was not a good business woman. Then we went back into town after setting up the tent and depositing gear. First step was a beer, then a map of Holland. After that we bought groceries at a Spar supermarket. We had macaroni and ham for dinner with a poor bottle of French red. Slept reasonably well for a first night.