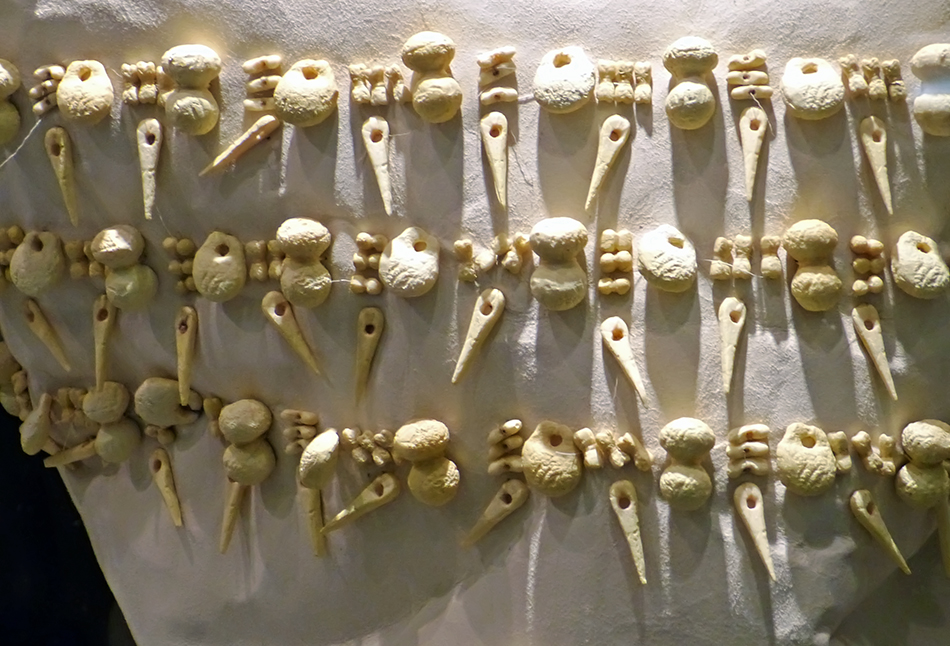 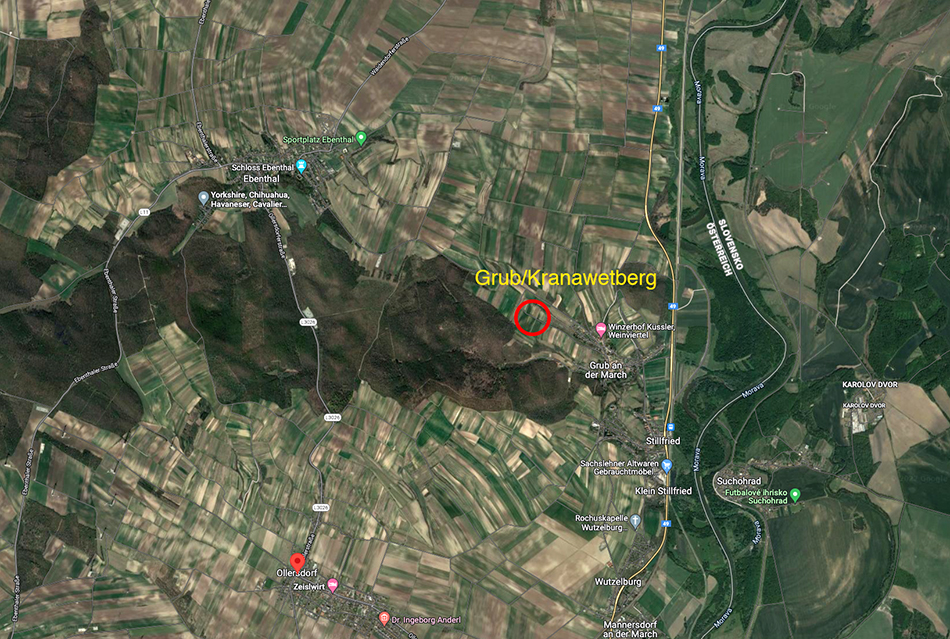 Map of the location of Grub-Kranawetberg

At Kranawetberg near Grub an der March, (Lower Austria), an archaeologist from the Natural History Museum examined 30 000 year old settlement remains from the Palaeolithic. She uncovered traces of tents, fireplaces and cooking pits. Outside the camp there was a rubbish dump with animal bones and ivory, which was burnt from time to time - a feature that speaks for a large camp that was used for a long time.

Modern excavation methods led to the discovery of 250 tiny ivory beads - the largest jewellery ensemble from the Ice Age in Austria!

Three later camps were apparently smaller and were used more briefly - a unique opportunity for archaeologists to study the reaction of Stone Age people to extreme environmental changes.

Text above from a display at Museum of Natural History, Vienna, Naturhistorisches Museum Wien.


Grub-Kranawetberg is a multi-layered Gravettian open-air site located approximately 40 km northeast of Vienna in Lower Austria, close to the border between Austria and Slovakia, located on a flat crest overlooking the Morava river valley near Stillfried.

The Palaeolithic finds from Kranawetberg/Grub date from around 25 000 BP to at least 22 000 BP. Bones of ice age animals were discovered when ploughing a vineyard. Initial investigations in 1993 revealed a layer of objects dating from the Ice Age. In the year that followed several mammoth skulls, tusks and a mammoth skull were excavated. Traces of scorching indicate that a fire was repeatedly lit at this site to burn leftover bones. Similar heaps of bones have also been found in the Czech Republic and Poland.

Roughly 20 metres northeast of this fire site was a settlement where traces of two tents with two fireplaces have been found. Archaeozoological investigations carried out by Marjolein Bosch revealed, amongst other things, two molar teeth from the jaw of the same mammoth – one on the pile of bones and another on the western edge of the settlement. It can therefore be said with certainty that the pile of bones and the campsite existed at the same time. The archaeologists also discovered almost 1 000 stone tools, several thousand unworked stone blades, 250 pieces of jewellery carved from ivory, and about 100 mollusc and snail shells from this period in the area where the hunters and gatherers would have lived.

Above this settlement layer there are three further layers from three other phases of use of this site. While the uppermost layers contain only few items and can therefore not be dated with any certainty, the third of these layers – the layer directly above the Palaeolithic layer previously discussed – is particularly interesting for two reasons. Firstly, radiocarbon dating indicates it must have been formed very soon after the storm which covered the remains of the lower layer with 8-10cm of loess. Secondly, the finds and settlement traces of the two layers show great differences. The people who came later to Kranawetberg did not have tents with tent poles well-anchored into the ground. Instead they got the raw material for their equipment from a completely different area from the previous settlers. They did not wear ivory jewellery and some of them had different tools.

At this stage the two layers seem to reflect the presence of two groups that may have used the area under changing environmental conditions.

In 2010 and 2011 a series of long-profile samples were taken at the east of the site for IRSL and OSL dating as well as pollen and mollusc analysis. Researchers wished to find out more about changes to the climate at this site. The IRSL and OSL investigations were carried out by Prof. Dr Ludwig Zoeller, chair of geomorphology at the University of Bayreuth.

The analysis of the faunal remains were carried out by Dr Florian Fladerer from the Austrian Academy of Sciences and Marjolein Bosch. Parts of the settlement structures had already been examined by Dr Philip Nigst from the University of Cambridge. Initial sediment analysis was carried out by Prof. Spyridon Verginisᵼ, while Dr Christa Frank, University of Vienna, was involved in the analysis of the molluscs.

The dating of the sub-layers within this profile has revealed deposits of loess sediments from the entire Late Palaeolithic period in Austria. Therefore, the site not only provides insight into a significant period of cultural development before the glacial maximum of the Last Ice Age but also into climatic changes during the last cold period in this part of Austria.

Some or all of these may have been obtained from fossiliferous limestone deposits.

Certainly the long Dentalium shells in the lower photo were fossils. These were highly prized because their hollow nature allowed them to be easily strung as beads. 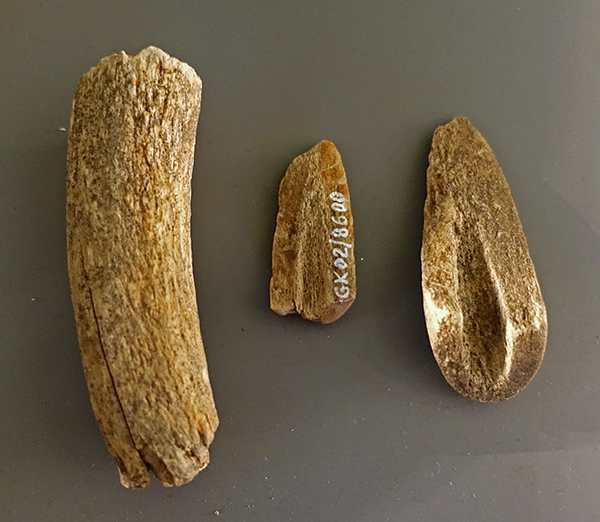 Worked antler, presumably for use as tools, circa 30 000 BP.

Bone spatulae, presumably for food preparation and serving, circa 30 000 BP.

Bones, especially the hollow bones of birds, are often ideal for use as awls, being thin, long, strong, and taking a sharp point.

A well chosen bone such as this one can have a blunt end, making it easy to use the palm of the hand in pushing it through skins and furs. 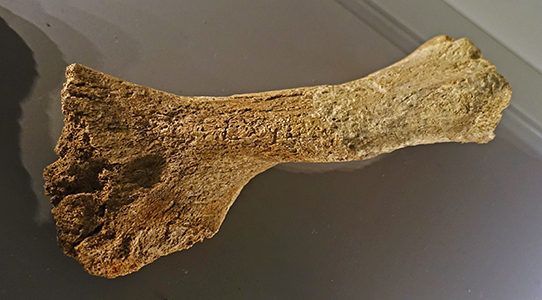 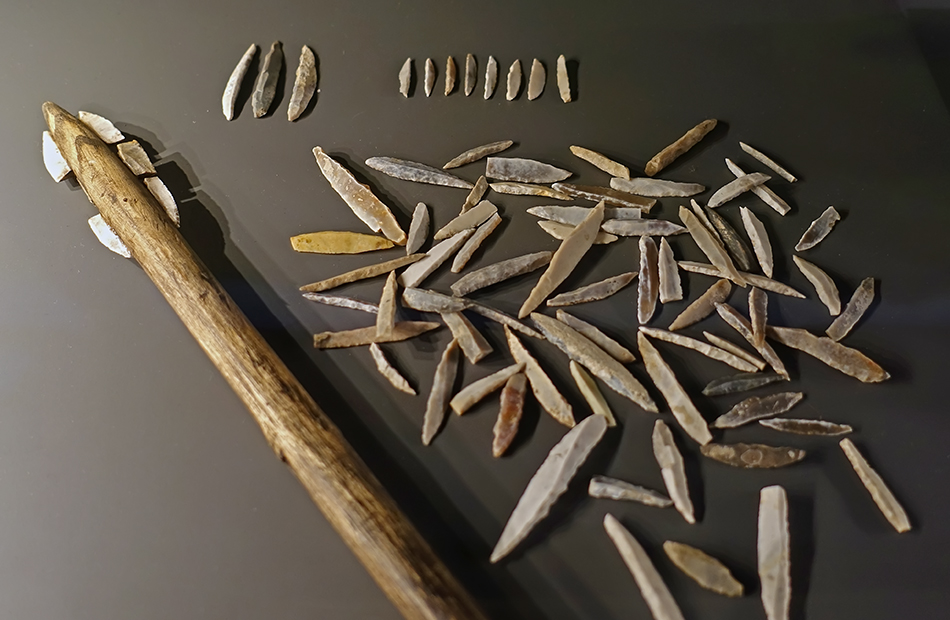 Dozens of microgravettes, as well as backed bladelets mounted on a wooden shaft, circa 30 000 BP.

Such a heavy thrusting spear would have been essential when hunting mammoths, having both the strength and stiffness needed for such a purpose, as well as the ability, with the addition of the small sharp bladelets, to create 'shock', or loss of blood, necessary for a quick kill. 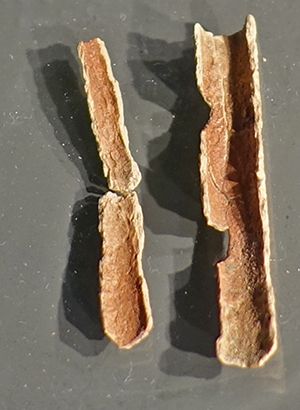 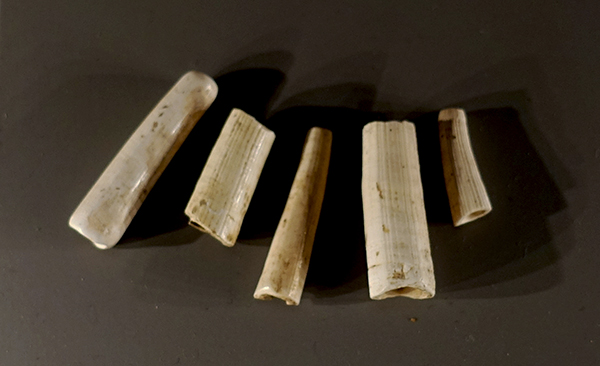 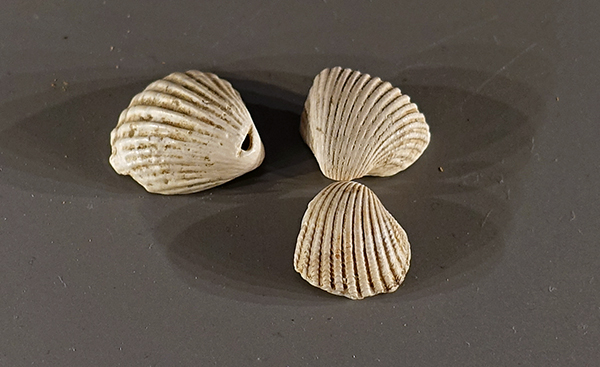 These are apparently from fossiliferous limestone. 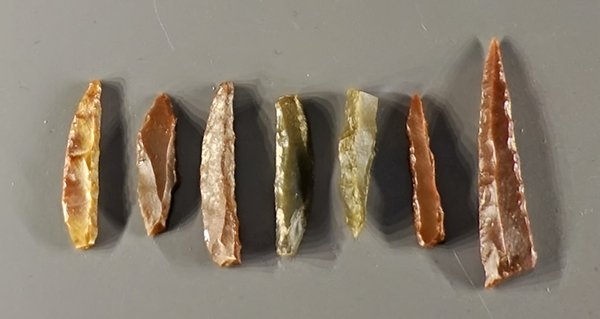 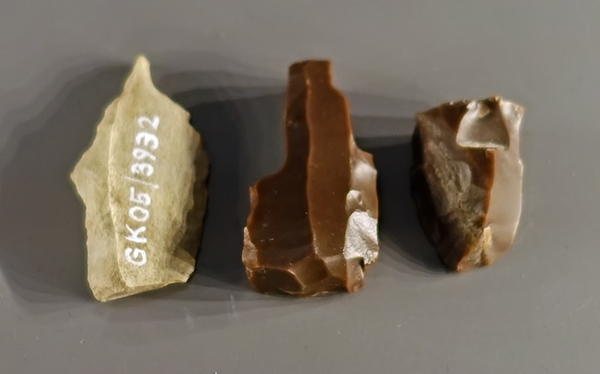 Drills such as the two tools on the left were used for making holes in jewellery, circa 30 000 BP. 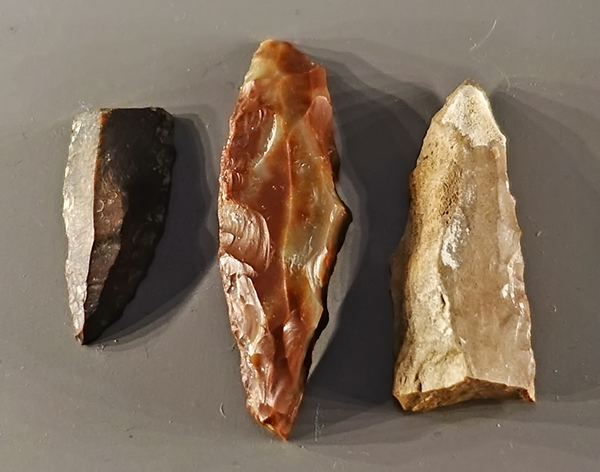 The central side scraper was well made from good quality flint or jasper, creating a thin, curved blade, we can see light beneath it from the angled lighting in the vitrine.

Tools were made for specific purposes, and were sharpened or modified as necessary after use.

However inevitably some break, and must be repurposed if possible, or thrown away. In this case the two outside scrapers have been made from broken points made originally on longer blades, now small, but still useful for some tasks. 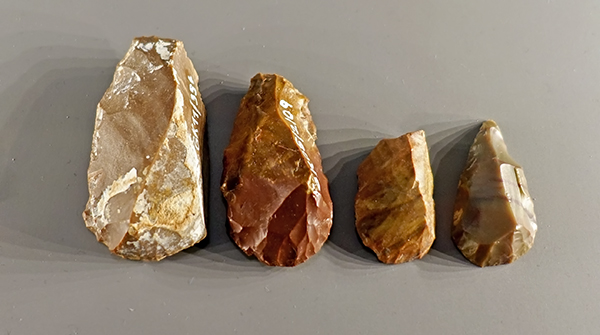 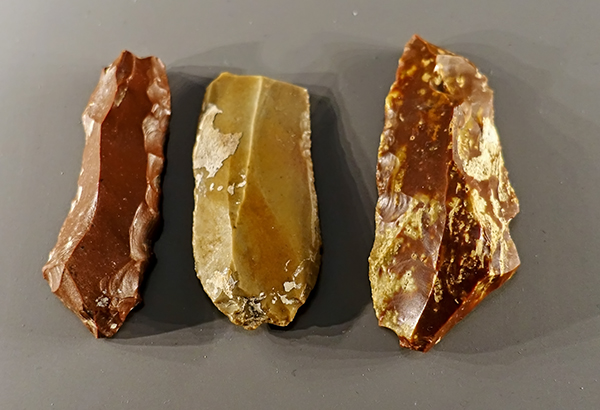 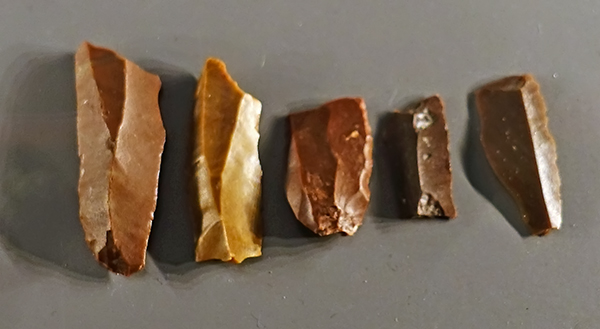