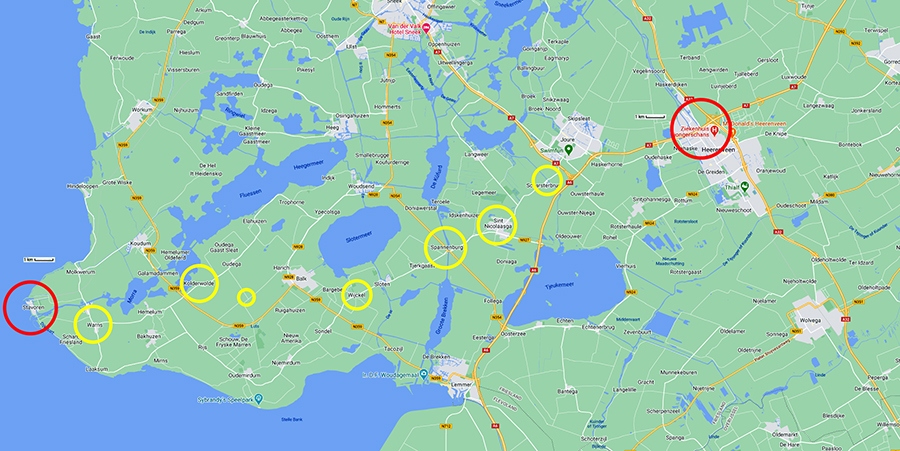 From Stavoren to Heerenveen

What a joy it was to cycle today - we left at 0700h - absolutely no traffic, being Sunday morning. We put the kilometres behind us - Warns then Balk then Spannenburg - St Nicolaasga. We picked up the LF 20a long distance route somewhere near Joure when a very helpful Dutchman gave us his cycling map showing all the routes. This was a big help as we headed towards Heerenveen. My bottom was starting to heal but it will take a while - need to get more antiseptic cream. 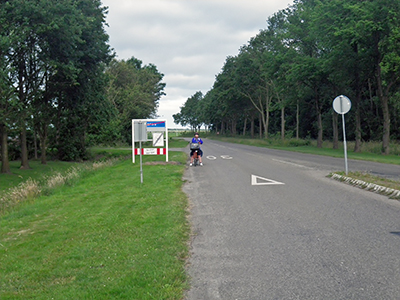 The cycleway gave out temporarily at this point, but there was little or no traffic in any case. 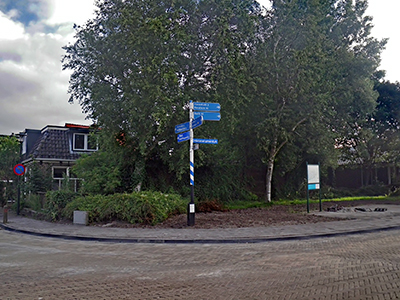 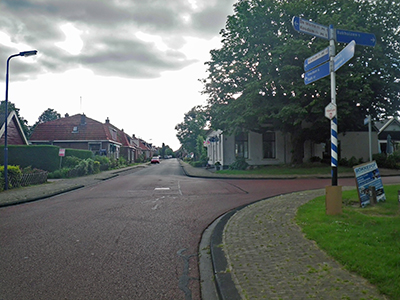 Inside Warns we followed the signs towards Balk. Fortunately Warns was well supplied with informative road signs. 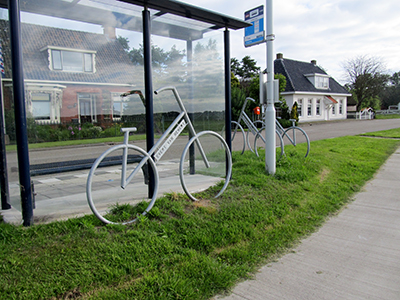 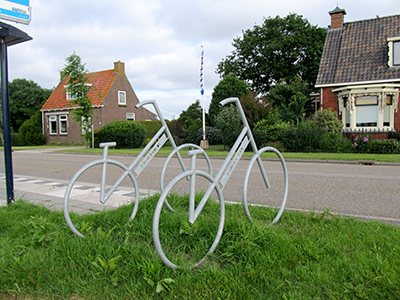 From Warns we went through Hemelum, then crossed the N359 highway and continued on to the small village of Kolderwolde.

We first saw these cycle sculptures beside the cycleway at a bus shelter. The sculptures are there to serve as bicycle racks. Then across the road we saw a group of bronze sculptures. 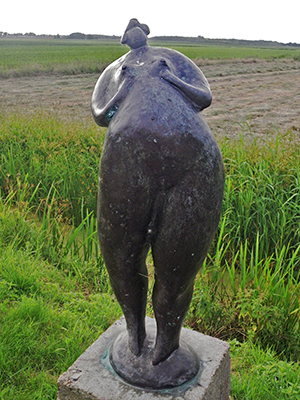 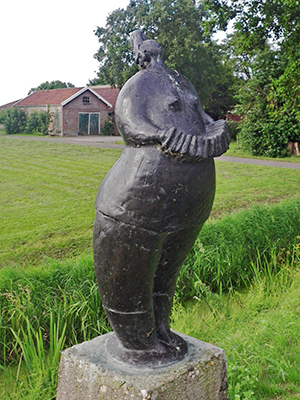 The bronze sculptures are by the Dutch artist Evert van Hemert, who lives at Kolderwolde. 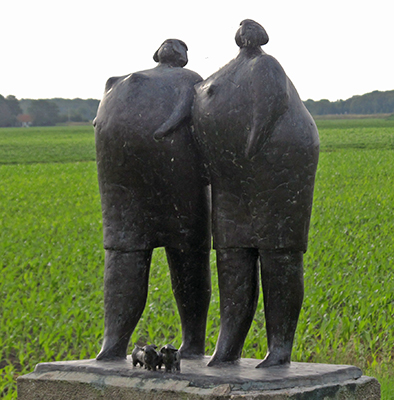 He has worked in Haarlem, Greece, and New Orleans, and has now settled in Kolderwolde . 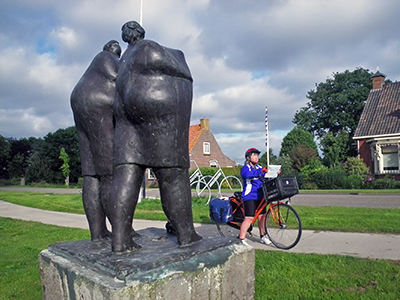 We took the opportunity to check the map, and decided to take the next turn off to the right just before Oudega. 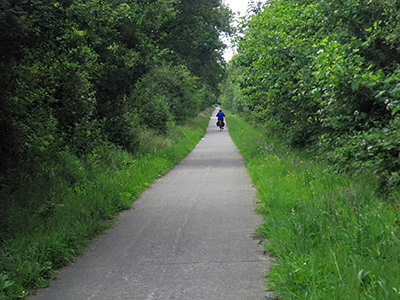 It turned out to be a delightful track which paralleled a rather narrow connecting road.

Nearly every road in Holland, no matter how minor, seemed to have a cycleway. 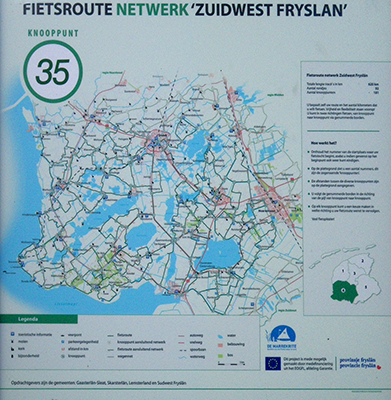 We were always glad to find a map by the side of the road, and get a fix on where we were.

The whole cycling network has since had a major overhaul, and this roadside map, along with all of the others, has been replaced to reflect the new system. 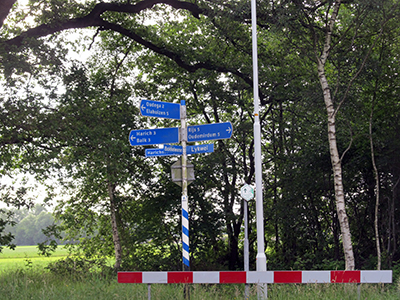 The small road and cycleway emptied out onto this wider road. The road signs were a big help too. Holland has a good system in this respect. 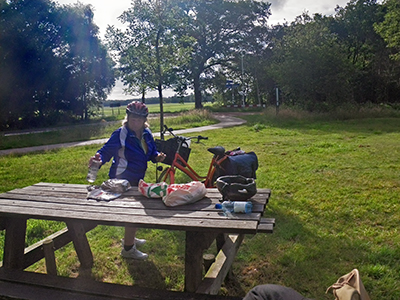 We looked around and realised that there was a large grassy area and benches at the road junction, so decided to have a break for coffee.

This is, no doubt, a favourite way point for large organised groups of cyclists on a club trip. It is well signposted, easy to get to, out of the traffic, and has plenty of room for bicycles, as well as three tables and bench seating. 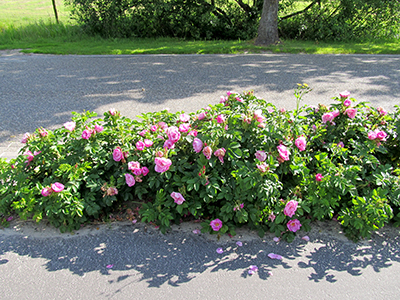 We pushed on, and came across these roses planted in the verge between the road and the cycleway.

It seemed to me that some enthusiastic gardener, tired of seeing the chaos left by the local authorities, who do not maintain such areas, but leave them to grow wild, had tired of seeing a mess, and set out to put things to rights! 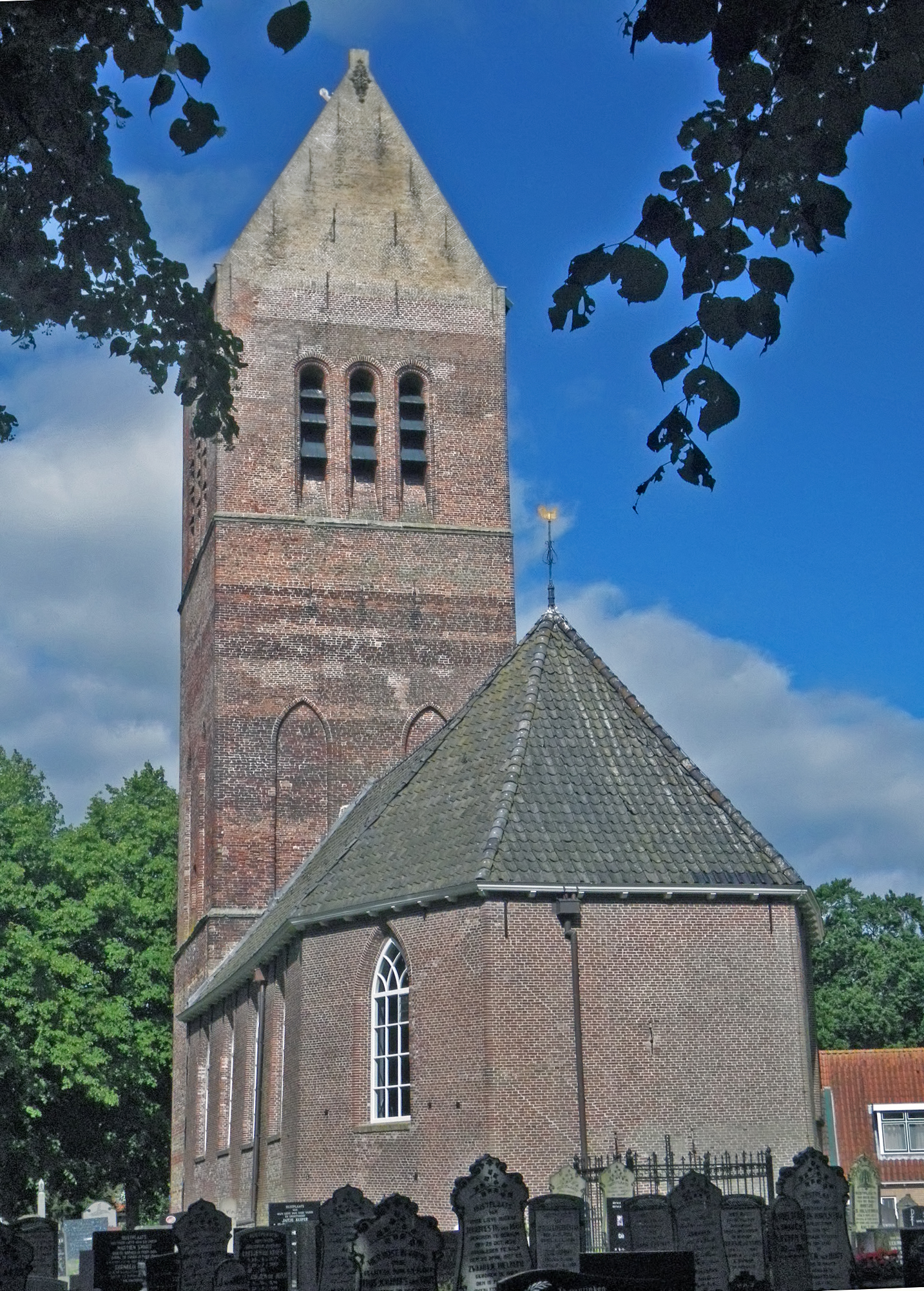 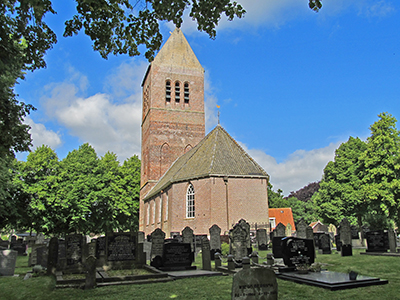 This is a Dutch reformed church founded by Menno van Coehoorn, who has also his own grave inside the church, the building of which commenced in 1671. 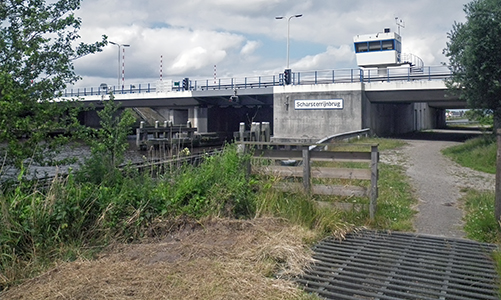 Scharsterrijnbrug, a bridge over a canal, was just before Joure and Heerenveen. The large sign was great, but it was probably put there for the convenience of canal traffic rather than cyclists.

This photo was taken looking back after we had passed under the road, the major A6 highway. We had actually gone much too far to the East to get to this point, but we then continued back on track to the little town of Scharsterbrug, crossed the canal, and went through Joure. 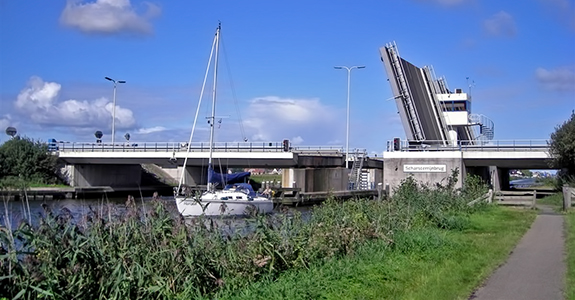 The bridge is what is called a bascule bridge, which is a movable bridge of which the bridge deck opens and closes by rotating about a horizontal axis at right angles to the direction of travel and parallel to the road surface of the bridge. The bridge is constructed as a bascule with the bridge deck on one side of the pivot point and the counterweight on the other . 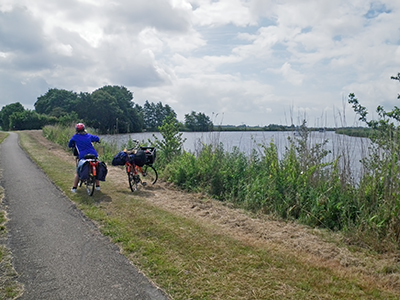 This photograph is taken looking the opposite way to the photo of the bridge above, where we had passed under the major A6 Highway.

We were headed towards the small town of Scharsterbrug and the bridge over the canal there.

Once again the lack of a GPS positioning system had led us astray - and we did not even know we were lost! However, we knew we needed to get to Joure, and this was the cycleway to there, which we headed for after crossing the bridge over the canal on our right at Scharsterbrug.

We had had very few problems of this nature on the Donau trip in 2008 - but on that trip we had the 'handrail' of the Donau to keep us on the straight and narrow! When you are going across country, and following Dutch cycleways, it is very easy to go many kilometres out of your way.

We were trying to navigate our way through Joure when a pedestrian noticed us poring over the map of Holland, and started talking to us - the Dutch must be one of the most multilingual people on the earth - and he soon realised that we did not have proper cycleway maps. He left us, we thought for good, and we continued puzzling over our road map of Holland, but several minutes later he returned in a car, and gave us his copy of the maps we needed!

From then on we had far less trouble navigating, though we still needed to work out the Dutch cycleway system, which we finally got the hang of. A very kind and generous man. 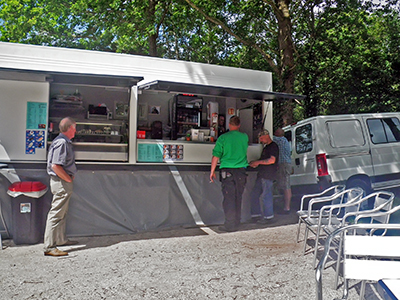 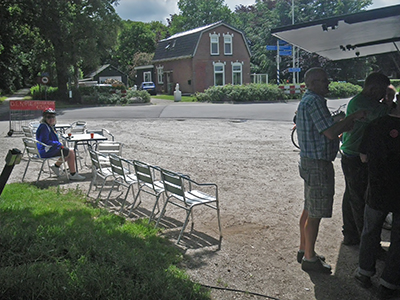 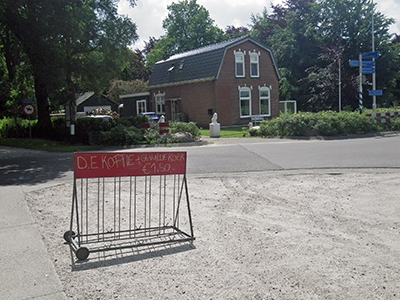 Half an hour later we were glad to come across this coffee cart. It was only there on weekends.

We had the special, coffee and an almond paste cookie each, as well as a sandwich, and bought some orange juice for later.

We had a sandwich along the way and bought some orange juice. Tonight we wanted to find a room somewhere to recharge electrical equipment, check emails etc. I also need to research campsite Youth Hostels.

We headed towards the centre of Heerenveen looking for tourist info. There was a big market on. Don managed to find a replacement raincoat after leaving his behind at one of our stops. By asking at successive shops we finally found a hotel.

We had dinner and watched France beat Honduras - a rough match which lacked style. 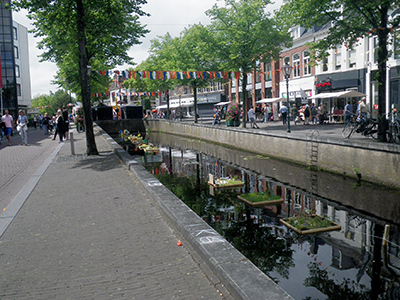 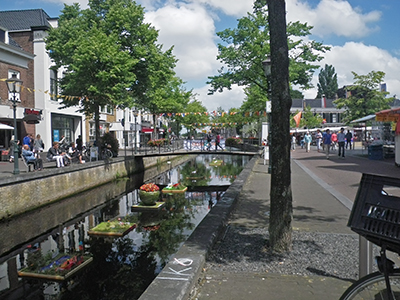 We were fortunate that there was a Sunday market on, so I was able to get a good replacement for the raincoat I had left behind at a previous stop.

It had turned into a very pleasant day by this time. 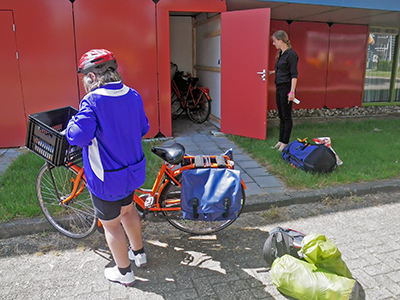 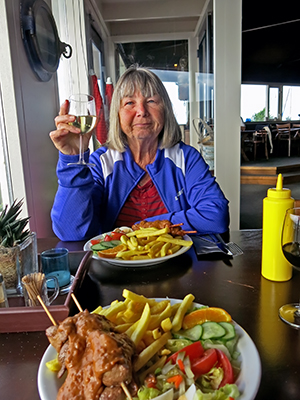 We checked in to the hotel, put our bikes in a secure locker outside, got caught up on electronics charging and emails, and had a welcome meal and some wine.