We left Spohle around 7.00 am and cycled towards Jade / Jaderberg. It was cold and grey with occasional showers. We were headed for Ovelgönne but lost our way using the cycle path signs - a big mistake - we then had to cycle in a circle in poorly signposted country and finally reached the main highway to Bremerhaven. 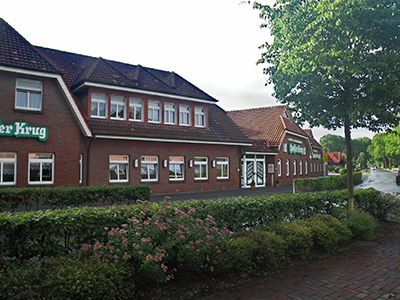 Next morning we set off from the fine hotel at Spohle, headed towards Jade. 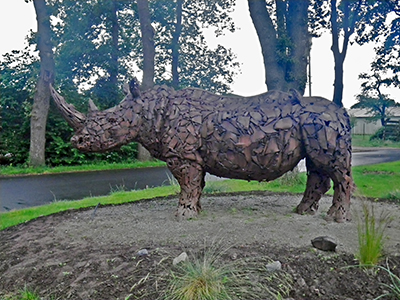 Not long after leaving the centre of town we came across this sculpture of a rhino, welded together from recycled metal scraps.

Note the oxpecker, or tick bird, perching on the back of the rhino. As well as getting rid of parasites, they alert the rhino when danger in the form of human poachers approach.

However, although they were originally thought to be an example of mutualism, recent evidence suggests that oxpeckers may be parasites instead. Oxpeckers do eat ticks, but often the ticks have already fed on the ungulate host, and no statistically significant link has been shown between oxpecker presence and reduced ectoparasite load. Oxpeckers have been observed to open new wounds and enhance existing ones in order to drink the blood of their perches. 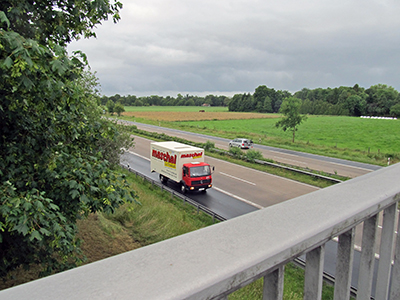 Along the way the cycleway crossed the major highway number 29, a couple of kilometres before Jade.

The cycleways / radwegs of Germany are very well organised, at no point did we have to cross a busy road. 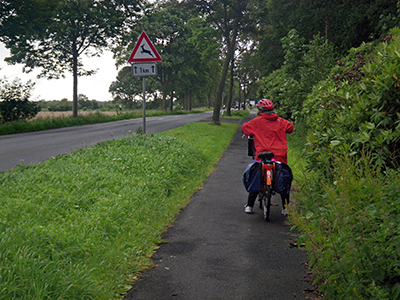 The weather was cold, grey, and wet. We noticed this warning sign for deer - we are used to warnings for kangaroos, emus, koalas and wombats, but I guess every country has wildlife to look after or beware of. 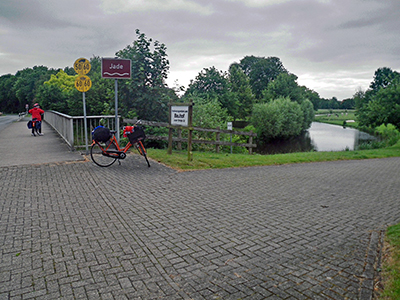 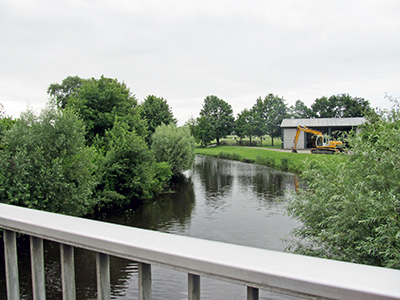 Entering the small town of Jade.

The need for speed limit signs for trucks was easy to understand, but just how many tanks are on German roads that they need speed advisory signs? These signs became very common in parts of Germany. 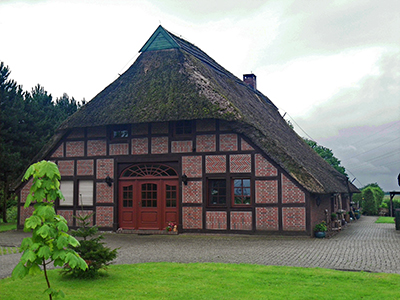 House with thatched roof, with the front done in the Tudor style. The infill was done in bricks, with many different patterns. A permanent ridge cover has been used as protection from the weather instead of being of higher quality thatch.

Note the small pegs and connecting wires on the ridge lines, which are part of a lightning conduction system, to stop the roof catching fire after a lightning strike. 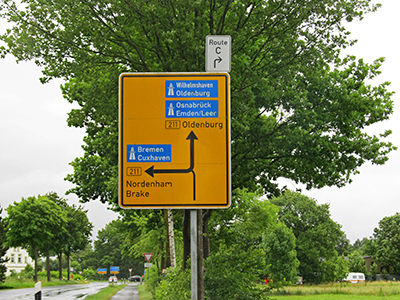 At Petershorne we turned left to go to Brake, and ultimately towards the ferry north of there to the other side of the Weser Estuary. 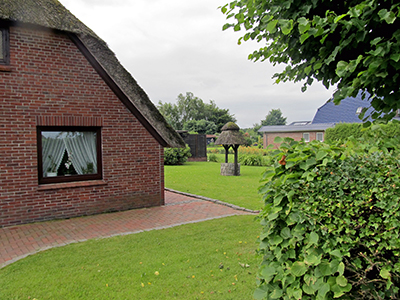 This delightful little well with a thatched roof was probably ornamental, in that there appears to be no windlass to pull up water in a bucket.

We cycled towards Brake then the ferry crossing which took 10 minutes or so. On the other side it was low gear up and over the levee. At Sandstedt we looked for a coffee but zilch! On to Hagen im Bremischen where we managed to buy the largest Döne Kebab you've ever seen with some coffee. 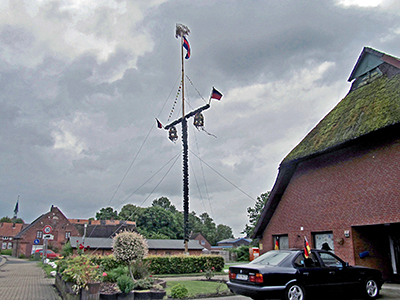 This tall wooden pole is a maypole, or Maibaum, around which a maypole dance often takes place, usually on the first of May.

Some are erected only for a short time, while some are permanent, as in this case.

Note that the thatched roof of this house also has a permanent ridge cover as protection from the elements, apparently a local tradition. 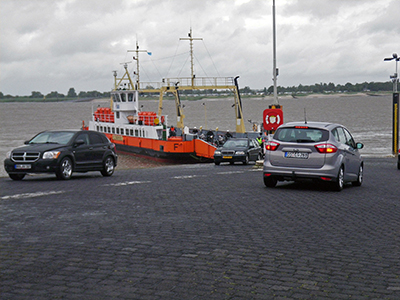 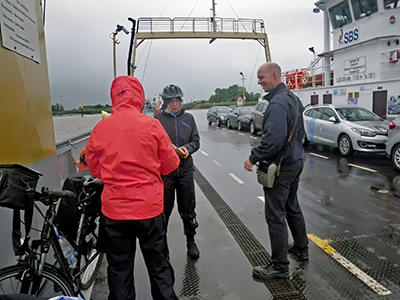 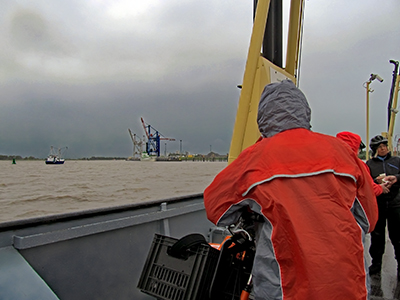 At last we reached the ferry over the Weser river estuary which opens to the North Sea, and lined up as the previous travellers left. Four minutes later, we were on our way.

The weather was closing in, we were wet as shags on a rock, and I was glad of my 'Dutch colours' raincoat.

And a little over ten minutes later, we were on our way again. 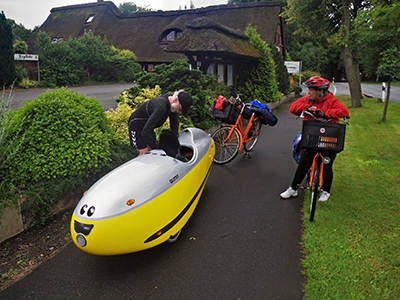 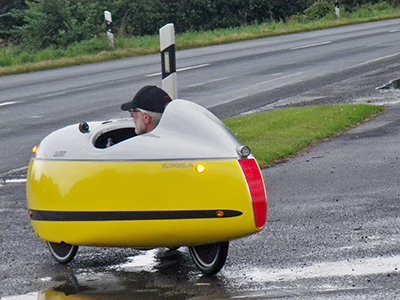 This 'Quest' aerodynamic shell fits over a specially made recumbent bike, and it travels a lot faster for the same input than when using a conventional bike. In addition, there is storage within the shell.

There is a clear shell made to cover the cockpit, not fitted here, which further enhances the aerodynamics. The advantage only kicks in, however, above about 20 km/h, but since it is heavier, the bike is slower to accelerate, and harder to push up hills. However in the flat lands of the Netherlands and the north of Germany, it has advantages. Some are fitted with electric assist for the hills.

The 'Kegelbahn' sign advertises a nine pin bowling alley, the European version of ten pin bowling, which uses strings to reset the pins, a cheaper way of doing things. The pins are set up in a square shape with the diagonal pointing to the player. The bowling balls are a little smaller, and do not have finger holes.

The game is also played in Australia in the Barossa Valley in South Australia, where German vintners settled. 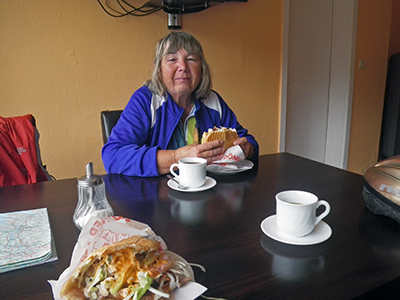 At Hagen im Bremischen we bought some very large Döne Kebabs and some coffee. We were certainly ready for lunch!

Don wanted to spend the night at Bramstedt so we found a hotel and settled in for the night. We drank Scotch and Coke and played cards, had a meal, then I watched Italy get thumped by Costa Rica. I read my emails and stayed awake long enough to see France defeat Spain. The room was warm with hot showers. I washed my hair but we're still trying to dry clothes. The tourist season hasn't really started yet which is good because it's been so cold - wearing my long nicks for days now. 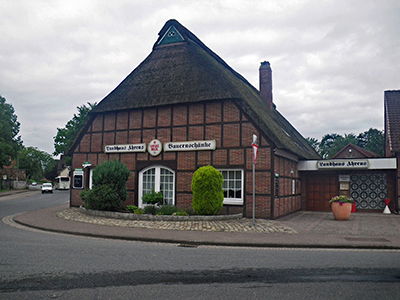 We were glad to check in to this hotel, the Landhaus Ahrens Bauernschänke, in Bramstedt.