Overview of the Iron Gates

From 'The Iron Gate Complex Atlas' by the Academy of the Socialist Republic of Romania. Published about 1965/1966 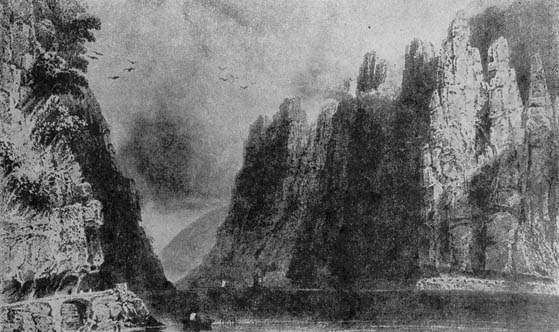 A view of the Lower Gorges. The entrance to Veliki Kazan (Large Cauldron). This is the most spectacular sector in the whole Iron Gates.
Photo: The Iron Gate Atlas 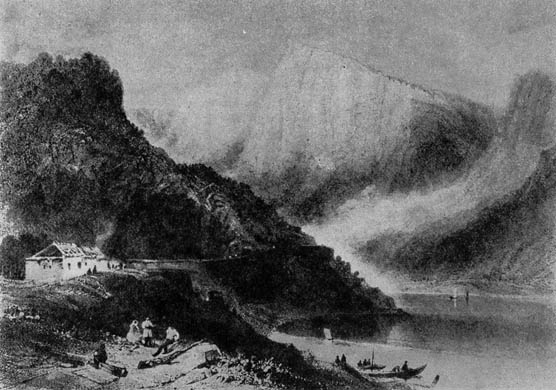 Another view of the entrance to Veliki Kazan (Large Cauldron). It is a calcareous (limestone) zone, and the channel in the Kazan (or Cazane in old sources) is compressed between vertical walls, is at its deepest, at 45 metres, and only 150 to 200 metres broad in some places, with an average breadth of 350 metres. 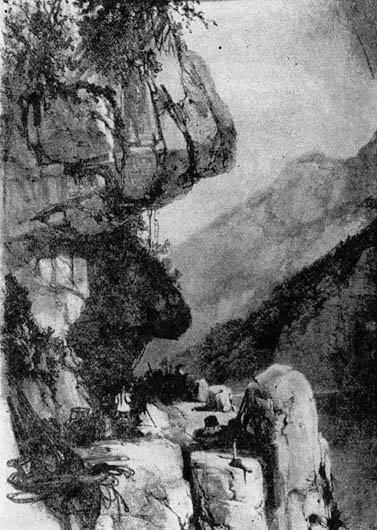 Another view of Veliki Kazan (Large Cauldron). Note the post and ropes used to tie up boats, and possibly to pull them through the gorges. Note also the steep cliff with a scary drop to the water below. The shallowest part of the Kazan is 22 metres in the small basin of Dubova, near Cuina Turcului. 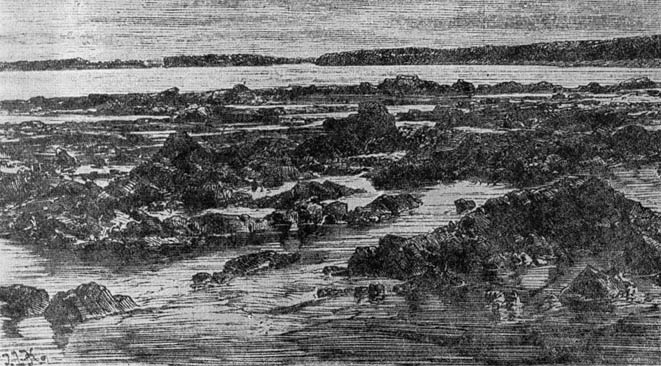 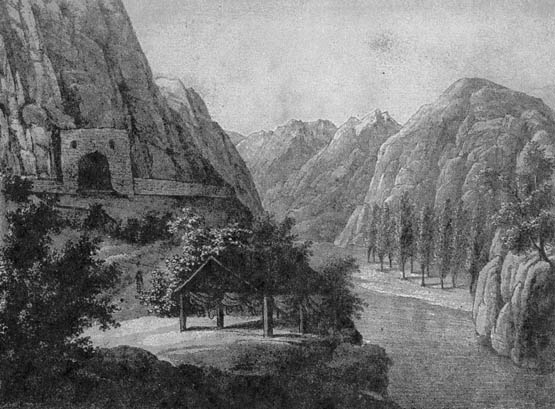 The cave was named after an Austrian field marshal. He heroically defended the cave area against the Turks in 1692, without being able to stop them. 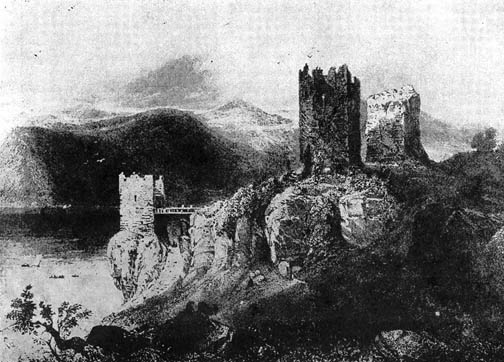 Tri Kule, a mediaeval fortress near Svinita built by Ban Petru Petrovici to prevent Turkish infiltrations to Caraansebes and Lugoj, which continued to be the possessions of Transylvania's ruling Prince. 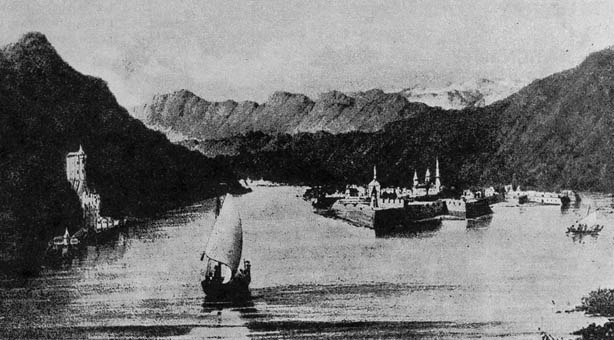 Ada Kaleh, an island in the middle of the Danube, just downstream from Orsova. The strategical importance of the Danube defile, which linked the city of Belgrade to Vidin - its source of supply, made the Austrians build on the island facing Orsova a fortress that was named Ada-Kaleh.

The works were started in 1691, resumed in 1717 and completed in 1737. The strongholds of Ada-Kaleh and Tekis, by their position on the Danube, made up the so-called 'Gibraltar of the Ottoman Empire'.

The island of Ada Kaleh was flooded by the Portile de Fier (Iron Gates) dam. The dam flooded the area by 1971 to an altitude of 69.5 m above sea level. Part of the fortress was proposed to be re-erected on the Simian Island, downstream of the new dam.

(The following text is from Wikipedia) 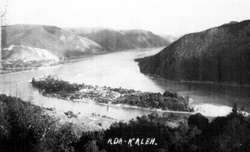 Ada Kaleh (Turkish for "Island Fortress") was a small island on the Danube populated by Turks that was submerged during the building of the Iron Gates hydro plant. The island was about 3 km downstream from Orşova and measured 1.7 by 4-5 km. 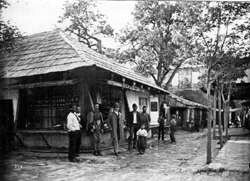 The Bazaar of Ada Kaleh.

The isle of Ada Kaleh is probably the most evocative victim of the Djerdap dam's construction. A Turkish enclave, it had a mosque and a thousand twisting alleys, and was known as a free port and smuggler's nest. Many other ethnic groups lived here beside Turks.


It was walled: the Austrians built a fort there in 1669 to defend it from the Turks, and that fort would remain a bone of contention for the two empires. In 1699 the island came under Turkish control, from 1716 to 1718 it was Austrian, after a four month siege in 1738 it was Turkish again, followed by the Austrians reconquering it in 1789, only to have to yield it to the Turks in the trailing peace treaty. Thereafter, the island lost its military importance. 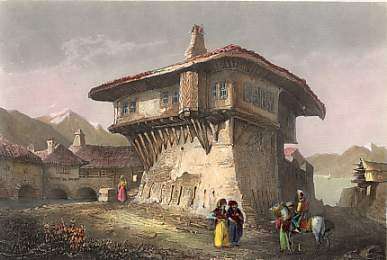 
The 1878 Congress of Berlin forced the Ottoman Empire to retreat far into the south, and the island came under the control of Austria-Hungary, though it remained the property of the Turkish sultan. The inhabitants enjoyed exemption from taxes and customs and were not conscripted. In 1923, when the Ottoman monarchy had disappeared, the inhabitants chose to join Romania.

The Ada Kaleh mosque dated from 1903 and was built on the site of an earlier Franciscan monastery. The carpet, a gift from the Turkish sultan, has been located in the Constanța mosque since 1965. The population lived primarily on the cultivation of tobacco and fishery, later on tourism. The island counted approximately 1,000 inhabitants.

With the building of the dam, some of the structures built on the islands were moved to nearby şimian Island, including part of the masonry of the fortress' catacombs, the Mosque, the bazaar, Mahmut Pasha's house, the graveyard and various objects. However, the Ada Kaleh community decided to emigrate to Turkey after the evacuation of the island instead of re-settling on şimian island. Also, a smaller part went to Dobruja, another Romanian territory with a Turkish minority.

Ada Kaleh, an island in the middle of the Danube, just downstream from Orsova. The quality of the original photo is not great. 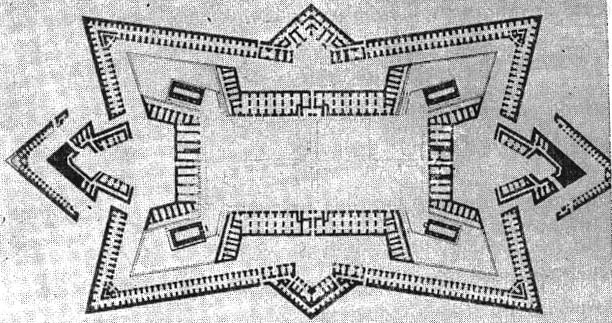 The plan of the fortress at Ada Kaleh. 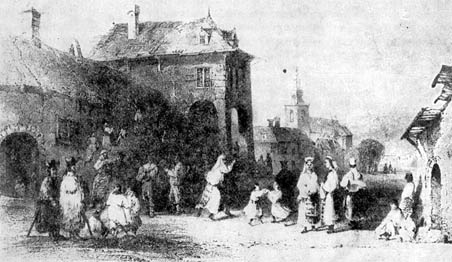 The Hora dance in Orsova. This original part of town was inundated by the dam, and the town was rebuilt on higher ground. 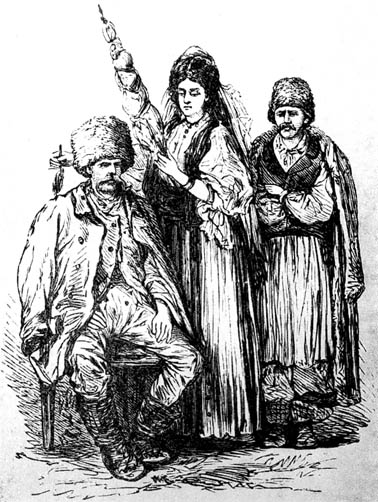 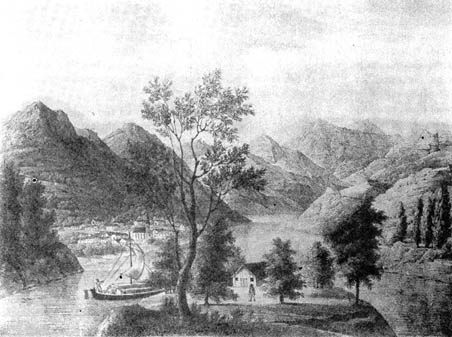 Moldova Noua, a village on a river flowing into the Danube above the start of the Iron Gates Gorge. Note the barge used as river transport. 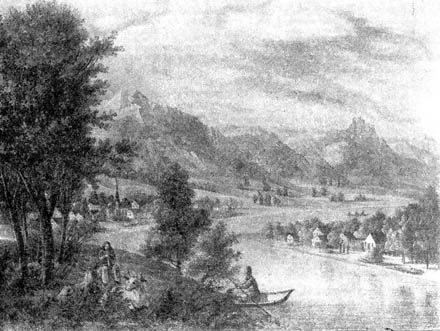 Pojejena, a village on the Danube just upstream of the entrance to the Iron Gates Gorges. Note the type of boat used.

From: The Iron Gate Atlas

Downstream from Orsova to Gura Vaii, the Danube flows through crystalline schists, limestones and the Sinaia strata. The slope dips 0.25% , speed in deep water reaching 5.7 m/sec. Most dangerous is the area between Virciorova and Gura Vaii, where paragneiss rocks and the Sinaia strata on the left bank of the river form the famous Iron Gate of the Danube. To facilitate navigation in this sector, a 3 km long canal was dug on the Serbian bank through which ships are dragged upstream with the help of a train engine.

In a project developed in the years 1890-1898, some 17 km of canals were dug to allow ships to pass through. There is a reversed ratio between width variation and bed depth; namely, the greater the bed width, the smaller the depth and the other way round. The channel is broadest in areas where hard rocks formed of granites or crystalline schists occur, being deepest and narrowest and flowing between almost vertical walls in calcareous zones or in the contact area between the latter and harder formations. Thus slopes rise upstream to downstream from 0,044%0 between Bazias and Pescari, to 0.106 % at Drencova, reaching 0.25% and even more in certain downstream points.

The deepest bottom floor is 45 metres (i.e. 7.5 metres above sea-level), and the lowest 6.5 metres, in the gabbro area south-east of the town of Tisovita. Along the defile there are two cataract points viz, at the Iron Gate and at Tachtalia. The Danube channel is broadest at Greben (2,150 m) and narrowest in the Cazanele Mici (only 150 metres).

Photos from The Iron Gate Atlas 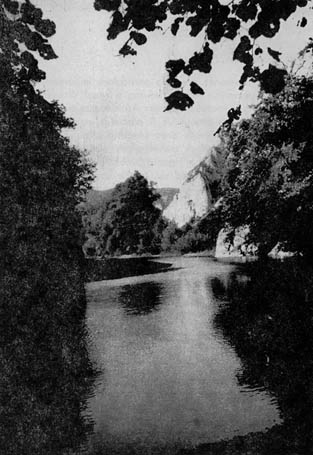 A view of the Nera Gorges. The Nera is a river which flows into the Danube above the Iron Gates Gorges.
Photo: The Iron Gate Atlas 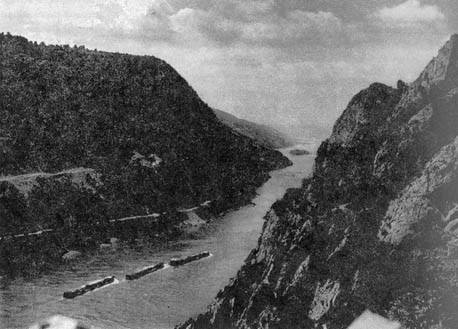 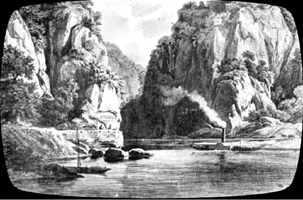 One of the gorges of the Iron Gates. Note the paddle wheel steamer. These craft were able to negotiate shallow and difficult passages which were not negotiable by propeller driven water craft. 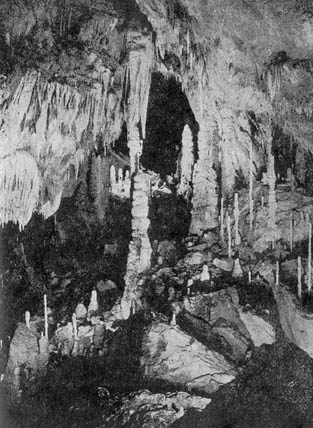 The Racovita Gallery in the Cave of Topolnita
Photo: The Iron Gate Atlas 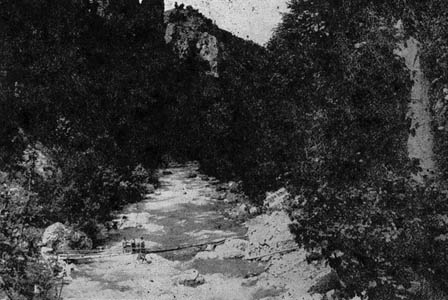 The Cerna Valley. The Cerna River feeds into the Danube at Orsova.
Photo: The Iron Gate Atlas

Back to the Location of the Sharamudoi