Les Eyzies is the single most important cave and abri area in the world, and from this point you can spend two weeks visiting very important archaeological areas in the immediate vicinity. 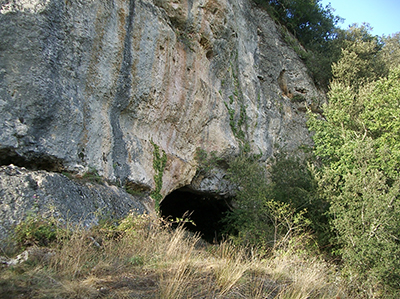 The Richard cave, or Les Eyzies cave, opens up in the middle of the holm oaks in the limestone escarpment which dominates the reception centre of the Pôle international de la préhistoire at Les Eyzies by about thirty metres. 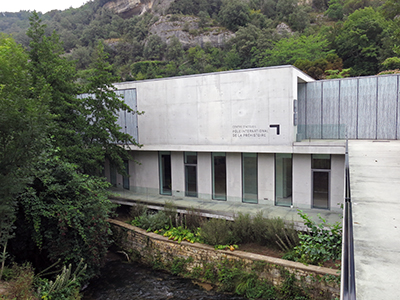 The Pôle international de la préhistoire at Les Eyzies is well worth visiting. They have an excellent archaeological display.

The Grotte des Eyzies is at the base of the cliff behind the exhibition hall. 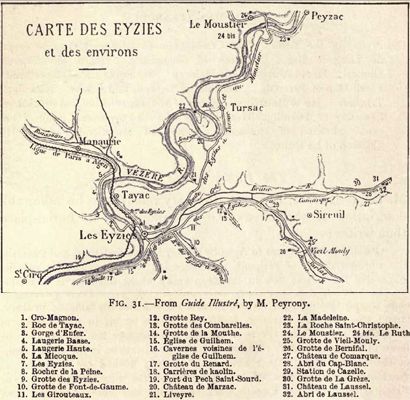 Map of the Les Eyzies area

Les Eyzies Caves
Two lines, one horizontal, one vertical, drawn from a a meet in the centre of the principal cave 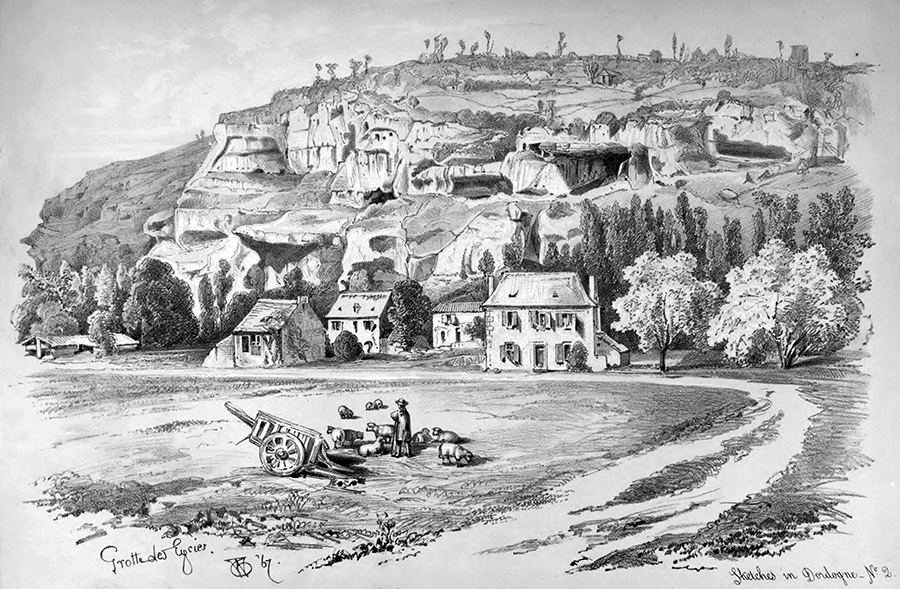 View of part of the village of Les Eyzies, near the junction of the Beune and the Vézère, showing the position of the Cave worked out by Messrs. H. Christy and E. Lartet. Taken by W. Tipping Esq., F.S.A., October 1864.

Diagram of the cave deposits at Les Eyzies.

a Limestone
b Hearth-stuff, with bones, flint flakes, and implements of stone and bone.
c Breccia of limestone cemented with stalagmite

The evolution of a rock shelter and its deposits.

When a zone of weaker rock underlies a stronger stratum, frost weathering (freeze/thaw cycle) cuts away the softer rock, creating a rock shelter. (The initial formation and subsequent undercutting of a cliff can also be caused by a river.) When this provides enough shelter, it becomes occupied. The roof periodically falls, covering the occupation material of bones, ash, and artefacts with rock and dust, the shelter is reoccupied, and the cycle continues until the rock shelter becomes completely filled in.

It would be hard to think of a better method for preserving fossils from the stone age than this, though it is tough on any inhabitants at the time of the rock falls.

Engraved bone pendant decorated on one side with a drawing of a wolverine facing away from the perforation. The engraved drawing fits tightly into the shape of the thin bone blank that did not allow space for the right front and back paws.The animal is confidently engraved with a relatively deep-cut outline showing its characteristic body shape, ears nose and eyes. Fine internal shading indicates the distinctive markings of the fur.

An oblique line that divides into two prongs at the tip extends from below the lower edge of the piece, across the body into the shoulder of the animal. Another extends from the upper edge into animal's neck at the same angle as the longer, lower line. Behind the left back leg there is a horizontal incision crossed over by three short vertical lines, another of which occurs just beyond the end of the horizontal incision.

There are slight ancient damage scars at the tip of the piece but the oblique lower edge is worked smooth indicating that it is not a break. The reverse is not decorated but the internal spongiosa structure of the bone is worked down, smoothed and slightly polished. The area around the perforation shows that the hole was started by scraping the outer bone surface prior to drilling it through from the decorated side. The piece has a repaired break of historic rather than ancient origin across the lower part of the perforation.

Double bevelled reindeer antler point with deeply engraved drawings of two ibex distinguished by their characteristic horns with raised rings along the length. They are depicted one behind the other, on each side facing the damaged tip of the point. The ancient damage to the tip has an impact fracture scar on one side but the presence of the tail and part of the rump of another ibex on the margin of the break indicates that the point was engraved before use rather than the broken piece being recycled as a blank for the drawings.

Both male and female ibex have horns that are carried throughout their lives.The male horns are larger, more or less divergent according to species and recurve at the back. Female horns are shorter and narrower. It is difficult to distinguish such differences from the engravings on the point with any certainty, especially as the horns are unnaterally flattened and drawn to fit into the space and around the curvature of the point rather than realistically. However, the absence of the beard, clearly depicted on the male ibex portrait drawn on bone from Courbet Cave (Palart.505) may suggest this group are females rather than males.

Ibex are short and stocky as depicted here but only the tops of the legs are depicted in the engraving leaving space for the large, powerful bodies. Nevertheless, the drawings indicate that the legs are extended in motion and the raised, typically stubby tails are also indicative of the animals walking. Fine oblique and vertically incised lines indicate the pelts but insufficiently detailed to be indicative of season.

On the upper edge, the horns and backs of the animals form a well-composed pattern suggestive of the backs of two more animals viewed from above with a sign with three points between the the horns of the two following animals. The lower surface is formed by the rough spongiosa of the exposed inner part of the antler.

The bevel surfaces are obliquely scored as on most points. This scoring is functional rather than decorative, improving the friction grip that holds it it tight when inserted into the spear shaft. 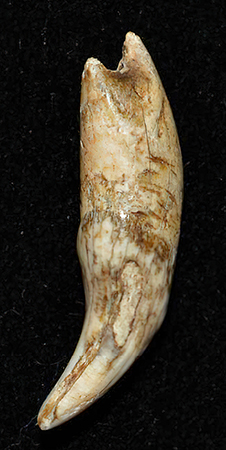 Personal ornament made from the canine tooth of a small carnivore perforated through the base of the root for use as a bead or pendant. The hole is made through the sides of the tooth. The root has broken across the hole and the proximal tip is missing. 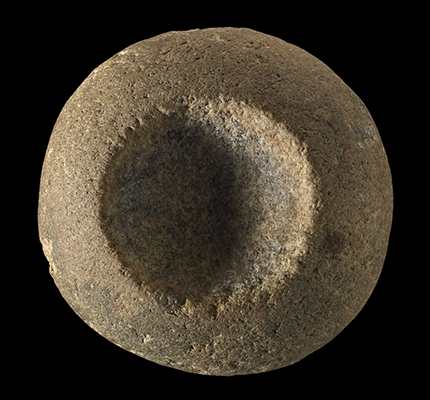 Lamp made on a quartzite cobble hollowed out by pecking to form a saucer shaped depression to hold tallow and a wick on the upper surface. Upper surface blackened. Some reddening of sides. 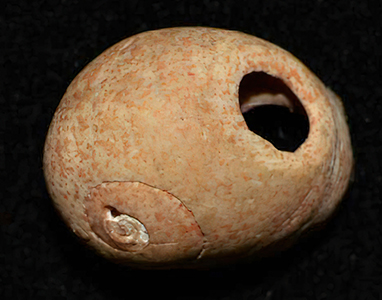 Personal ornament made from the shell of a sea snail (winkle) perforated for threading through zone 1 on the back opposite the mouth. The shell is complete.

Map of sites in the Vézère Valley of France, including Les Eyzies.

The following is adapted from Daniel (1972)

Le Grotte des Eyzies, also known as the Grotte Richard, is located on the left bank of the Vézère. It opens to the SSE in the line of rocky cliffs which border the right bank of the Beune, a few hundred metres to the East of the Château-Musee des Eyzies and 35 metres above the line of the river. It has an ovoid shape and, according to measurements made in 1966 by J.-M. Bouvier, its actual dimensions are as follows:

It is a large open porch 9 metres wide and 3.2 metres high. the cave is 15 metres wide, 11 metres deep and the highest point of the vault is 5.40 metres above the present ground, approximately horizontal.

When in 1863 Lartet and Christy entered this cave, they found on the floor a very hard black breccia, which was made of bones and cut flints, from which they were able to extract large slabs which are now scattered in various National Museums.

But this cave, like many others in the Eyzies region, had been occupied in the Middle Ages and partly emptied of its filling. This is how the most recent archaeological levels were emptied on the neighbouring terraces. Lartet and Christy, whose work was located in the cave itself, did not touch this disturbed soil.

It was not until 1903 that D. Peyrony had the idea of exploring this mass of earth hidden under the grass, which was archaeologically very rich. The lithic and bone material from the Eyzies cave is scientifically very poorly known, because apart from what may be contained in the large slabs of breccia collected on the floor of the cave, which it would be a pity to sacrifice to excavate them in the laboratory, we only have objects collected long ago, or in the rubble. 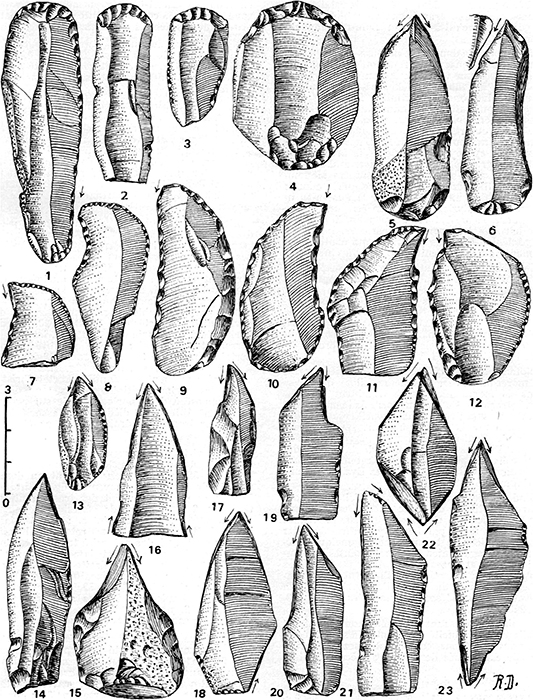 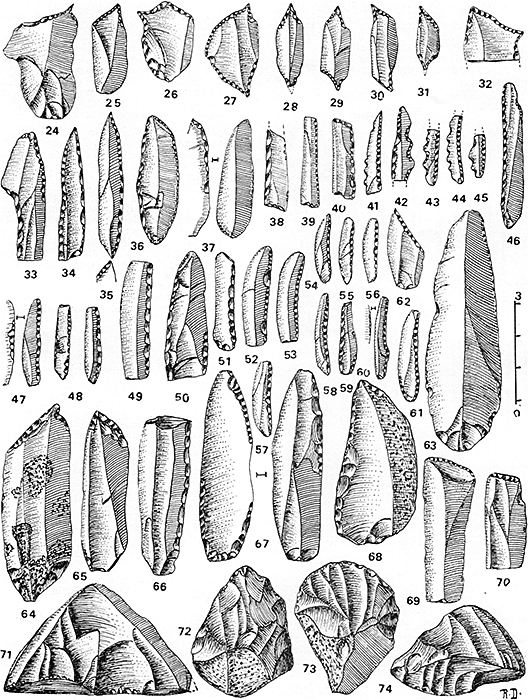 48: Dufour blade with an alternate retouch ( Dufour blades or bladelets were produced as a byproduct of the knapping of carinated and nosed scrapers, and were used as points on spears/darts and as hafted small knives for meat and soft vegetable matter. - Don ). 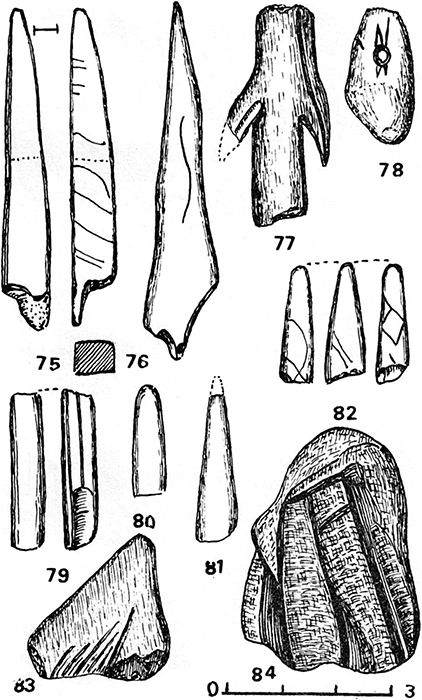