Grotte du Grand Roc is a cave of calcite concretions, with no history of being used by prehistoric people. It is between Laugerie Basse and the Gorge d'Enfer.

In 1922, Jean Maury, who was then an archaeologist at Laugerie Basse, noticed a small natural terrace halfway up the great cliff of the Grand Roc. He quickly climbed up to discover a small crack from which came a small spring. Unaware of the origin of this flow, his inquiring mind rapidly imagined that a hidden cavity might reveal the source. After two years of hard work and a last mining foray on April 29, 1924, Jean Maury, his sister and daughter, entered the untouched cave.

“Shouts of joy and the national anthem first saluted the discovery. We could admire marvellous stalactites and other strange forms, very clear and surprising, looking as if they had never been seen by anyone before, and others which seemed to come straight out of unrealisable dreams – until the candles we used to light up the way began to burn down too far for us to continue. But at what point had we entered the cave? We passed a column again in the form of a cross, which we identified as the central point. After groping along for a while, we heard our parents calling and followed their voices to find, at last, the fox hole through which we had come. Drained of all anxiety, we presented ourselves proudly in our soaked clothes spattered with mud, filled with enthusiasm by what we had seen.”

The Grotte du Grand Roc opened in 1927; following the discovery in 1924, 3 years were necessary to make the interior and the exterior of the cave suitable for visitors.

The first guests only had candles, and although it was thus a quite picturesque visit, not much could be seen. Acetylene (carbide) lamps were a big improvement which came later, and in 1934 electricity was installed. In 1993, the lighting of the cave was entirely reorganised. Engineers managed to match the various features of the site such as fragility, difficulty of access, and necessary preservation with a genuine artistic view of all the formations in the cave.

Text above adapted from http://www.fermedetayac.com/grand_roc.htm 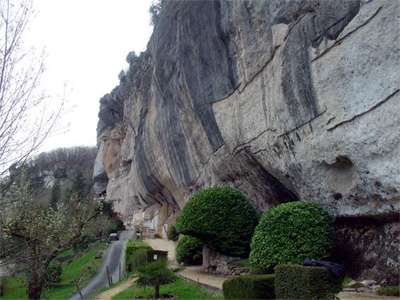 Map of sites in the Vézère Valley of France, including la grotte du Grand Roc. 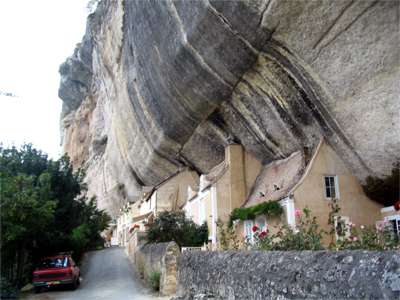 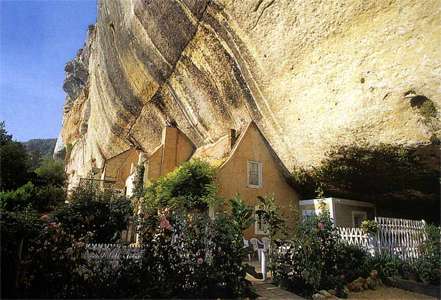 A photo of the approach to Grotte du Grand Roc showing the way that modern houses have been built in the shelter provided by the overhanging wall of rock.

Photo: This image is from a postcard by Editions Grotte du Grand Roc sent to me by Anya. My thanks as always. 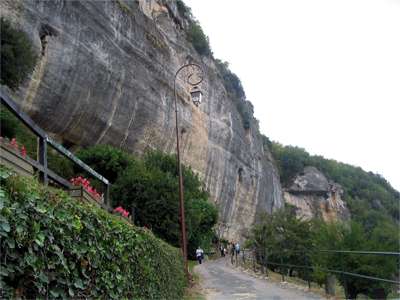 Here we can see the ramp leading up to the entry to the Grotte. 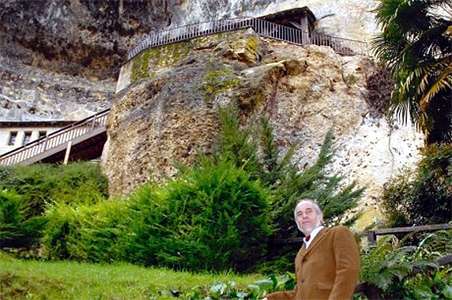 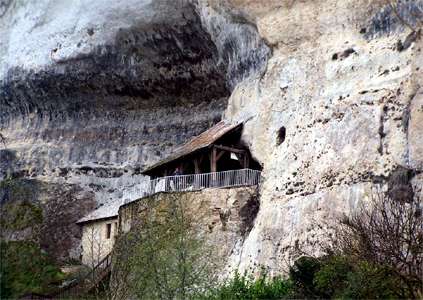 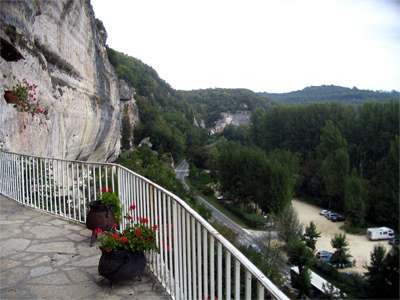 Grotte du Grand Roc, at the patio which is the entry to the Grotte.

From this point can be seen the large car park which services both Grotte du Grand Roc and Laugerie Basse. 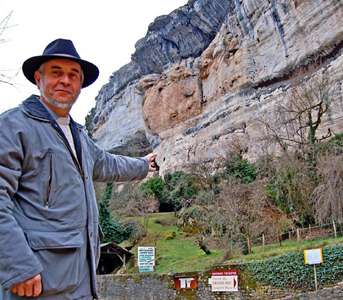