Grotte de Queylou just outside Les Eyzies is a spectacular pre-historic site, which is not generally known. It also in many ways personifies what a pre-historic cave dwelling would be like, with its medieval features of large carved out windows, shelves, benches, and holes for wooden beams.

Grotte de Queylou is located on a main trail that goes along the bottom of long cliff face, which contains many prehistoric overhangs, rock shelters, and numerous caves. Hiking this trail is truly idyllic with many wonders and continual panoramic views.

It is located just outside the town of Les Eyzies, high up in the rock cliff that faces the town from across the valley. The views from this cave are wonderful, and one can see the town of Les Eyzies and the valley and river below. The cave shelter itself is very large, and has the benefit of having a beautiful and substantial geological cave, with many concretions, formations, and crystals, starting from the back of the rock shelter.

Grotte de Queylou has been well researched and studied. It is truly a hidden treasure. You will definitely need a helmet (caving or bicycle) and good caving lamps, no ropes are required. Long jeans are highly recommended. Binoculars are recommended as well. There are a lot of bristles, thorns, and stinging plants, and of course, in the cave, one gets dirty, but the geological portion of the cave is just lovely with beautiful stalagtites, stalagmites, columns, draperies, and crystal formations. Unfortunately, the geological portion of the cave has been damaged and vandalized due to tourists, but there is still plenty to see and admire inside. Please respect the caves and not damage them, and leave them they way you found them.

Text above, and all other text and photos on this page except where noted: The Neanderthal


It should be noted that if you wish to visit this cave, as well as the numerous other prehistoric sites on this trail (as seen in the video), one must get an early start, and plan on a whole day, as well as a strenuous, but not difficult hiking experience. Bring water and a picnic lunch. It is wonderful to eat in the cave and look out over the valley. It would be a really a fully packed day to visit all the caves on this route, and it might be best to camp overnight in one of the caves, and divide the trip into two full days to really get the full enjoyment out of the experience. There are very few people on this route.

The cave entrance is not visible neither from the road or even when you reach the trail beneath the cave. One can identify the path to the cave by a series of photographs. The first is a specific rock that you will need to scramble up and over, and onto a trail into the bushes. The climb is not difficult, but it is a scramble. One can use a tree coming out of the rock to pull oneself up onto a ledge and a small trail through the scrub. Following this trail will bring you to another rock face and ledge which you much climb up (again not difficult, as there are good foot and handholds). Following this around brings you to another area that requires a rock scramble up through a crevice to another high ledge (you can ignore the two small rock shelters near this crevice), which puts you in the entrance of the cave. 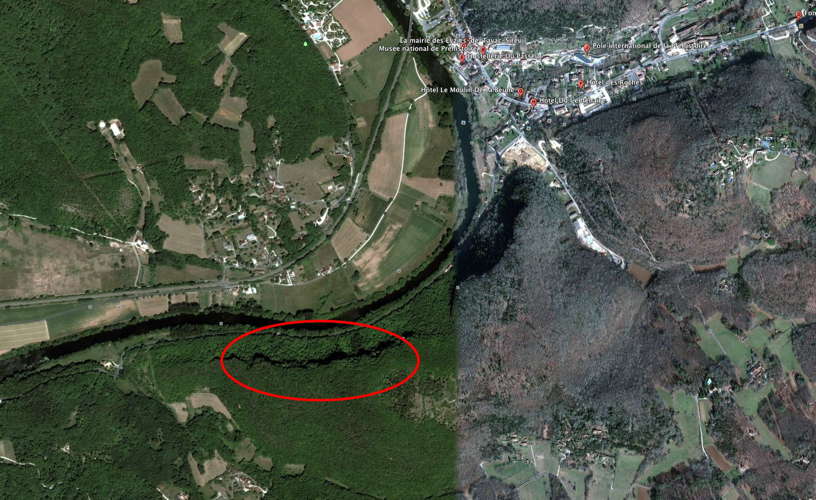 Grotte de Queylou is one of a series of caves and abris on a cliff overlooking the Vézère River, and only a kilometre or so from Les Eyzies, shown here in the upper right of the photo. 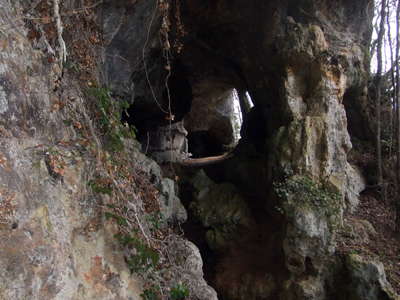 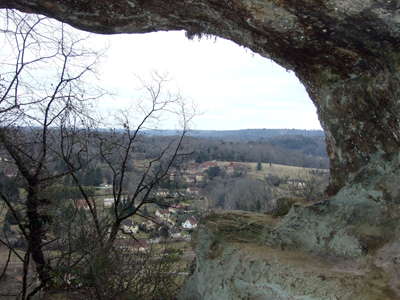 (left) View of Grotte de Queylou from the platform on the other side of crevice, where one climbs up. On the right, one can make out two large 'windows' onto the valley. The cave continues to the left and around to the right again behind rocks, where there is another large window, seen in the photo on the right.

(right) View looking out over the valley from the opening at the far side of the cave. 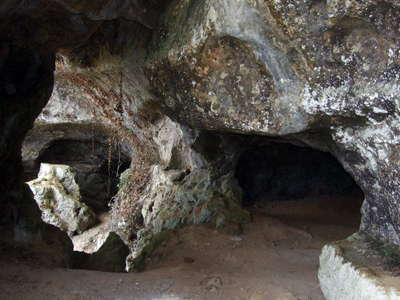 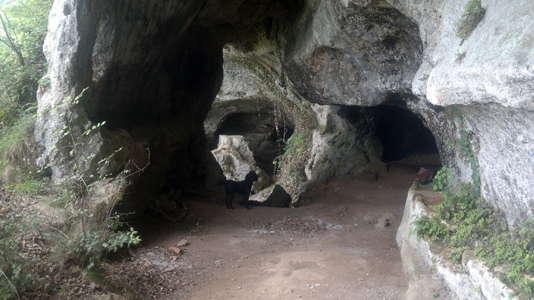 (left) View looking back at the area shown on the photo above on the left at the platform from which the photo looking into Grotte de Queylou was taken. From this angle, you can see a cave entrance to the right, which leads into the extensive geological part of the cave. There is another cave straight ahead, past the platform.

(right) Another view looking back atthe area shown on the photo above on the left. On the left of this photo one can see part of the large cave opening and the 'window' as well as carved out benches and other areas on both the right and left walls. 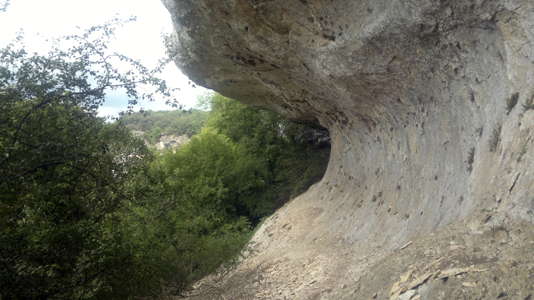 One of the many over hangs. There was once a dig at the bottom of this overhang, out of frame in this photograph.

Grotte de Queylou has been well researched and studied, although it is difficult to find much about through standard searches on the web. It is truly a hidden treasure. You will definitely need a helmet (caving or bicycle) and good caving lamps, no ropes are required. Long jeans are highly recommended. Binoculars are recommended as well. There are a lot of bristles, thorns, and stinging plants, and of course, in the cave, one gets dirty, but the geological portion of the cave is just lovely with beautiful stalagtites, stalagmites, columns, draperies, and crystal formations. Unfortunately, the geological portion of the cave has been damaged and vandalized due to tourists, but there is still plenty to see and admire inside. Please respect the caves and not damage them, and leave them they way you found them. 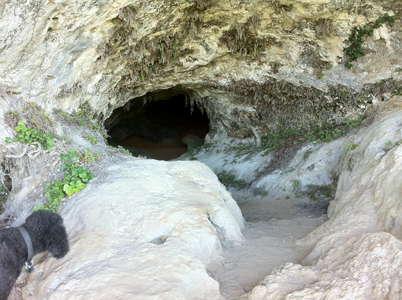 Another of the many unmapped caves on this path.

To reach Grotte de Queylou requires a very steep climb up the cliff without any trails to the rock face. You should be in good physical condition, and be able to climb a steep untrailed and slippery slope, and be able to scramble over rocks. No rope work is needed, but you will have to be able to scramble up. On the D706 (Avenue du Cinglé) outside of Les Eyzies (just under 1 mile outside of town) there will be a small, and unmarked, single car turn-out. You can find this by typing in the following address in google: "353 Avenue du Cinglé, Les Eyzies-de-Tayac-Sireuil, Aquitaine, France" It is helpful to look at this with Google street view so that you have the exact identification. 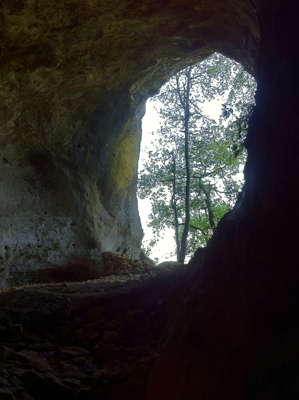 This is a large rock shelter with an impressive opening above the trail. It has a sign signifying that it is pre-historic.

This rock shelter requires a scramble up rocks from the trail to reach it. 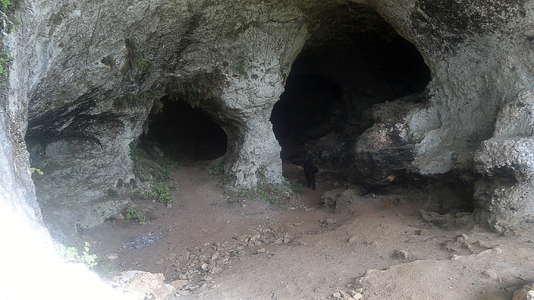 Another unmapped cave entrance on this trail.

Starting from Les Eyzies take the N.706 towards Bugue and stop at the first underground quarry at the side of the road.

Return towards Les Eyzies until you get to a large rock on the roadside, then climb up the wooded slope to reach the foot of the cliff which is then followed to the right. A series of small climbs takes you to the large porch of the cave.