Ice Age Maps showing the extent of the ice sheets

The last great ice age began around 120 000 years ago. One massive ice sheet, more than 3 kilometres thick in places, grew in fits and starts until it covered almost all of Canada and stretched down as far as Manhattan. Then, 20 000 years ago, a great thaw began. Over the following 10 000 years, the average global temperature rose by 3.5° C and most of the ice melted. Rising seas swallowed up low-lying areas such as the English Channel and North Sea, forcing our ancestors to abandon many settlements. 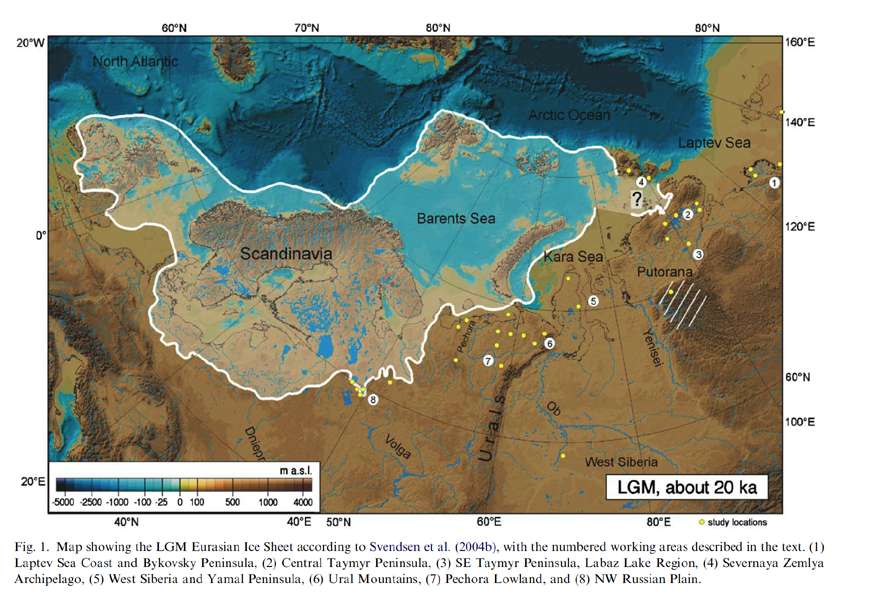 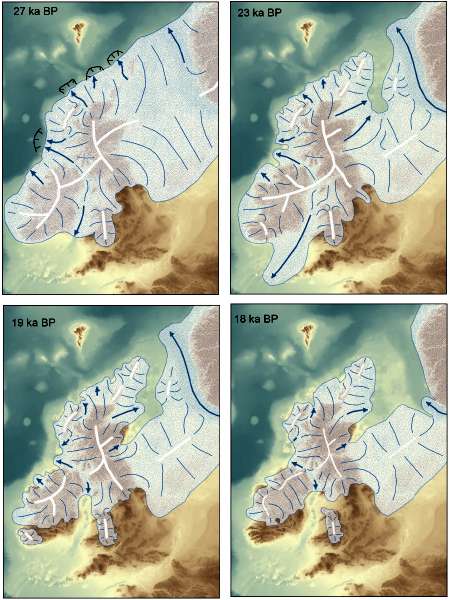 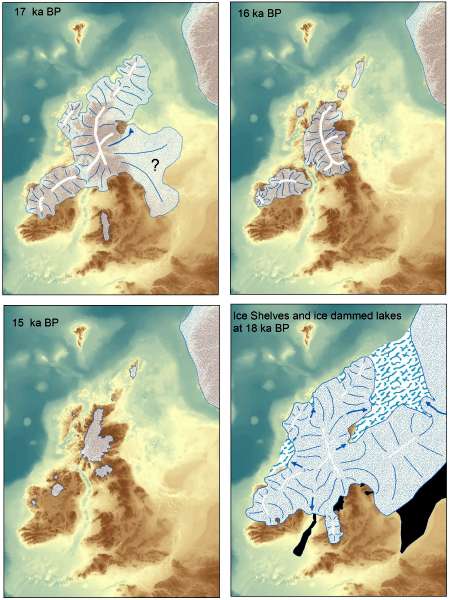 These maps show the rate at which the ice sheet over the British Isles during the last Ice Age melted. The ka on the images is short for thousand years and BP is "before present." So 27 Ka BP is the map of the ice sheet at 27 000 years ago. - University of Sheffield

A set of maps created by the University of Sheffield have illustrated, for the first time, how the last British ice sheet shrunk during the Ice Age. Led by Professor Chris Clark from the University's Department of Geography, a team of experts developed the maps to understand what effect the current shrinking of ice sheets in parts of the Antarctic and Greenland will have on the speed of sea level rise. The unique maps record the pattern and speed of shrinkage of the large ice sheet that covered the British Isles during the last Ice Age, approximately 20 000 years ago. The sheet, which subsumed most of Britain, Ireland and the North Sea, had an ice volume sufficient to raise global sea level by around 2.5 metres when it melted.

Photo: By kind permission of S. Davis, University of Sheffield

Using the maps, researchers will be able to understand the mechanisms and rate of change of ice sheet retreat, allowing them to make predictions for our polar regions, whose ice sheets appear to be melting as a result of temperature increases in the air and oceans.

The maps are based on new information on glacial landforms, such as moraines and drumlins, which were discovered using new technology such as remote sensing data that is able to image the land surface and seafloor at unprecedented resolutions.

Experts combined this new information with that from fieldwork, some of it dating back to the nineteenth century, to produce the final maps of retreat."It is also possible to use the maps to reveal exactly when land became exposed from beneath the ice and was available for colonisation and use by plants, animals and humans. This provides the opportunity for viewers to pinpoint when their town/region emerged.

Professor Chris Clark, from the University of Sheffield's Department of Geography, said: "It took us over 10 years to gather all the information in order to produce these maps, and we are delighted with the results, It is great to be able to visualise the ice sheet and notice that retreat speeds up and slows down, and it is vital of course that we learn exactly why. With such understanding we will be able to better predict ice losses in Greenland and Antarctica. In our next phase of work we hope to really tighten up on the timing and rates of retreat in more detail, by dropping tethered corers from a ship to extract seafloor sediments that can be radiocarbon dated." 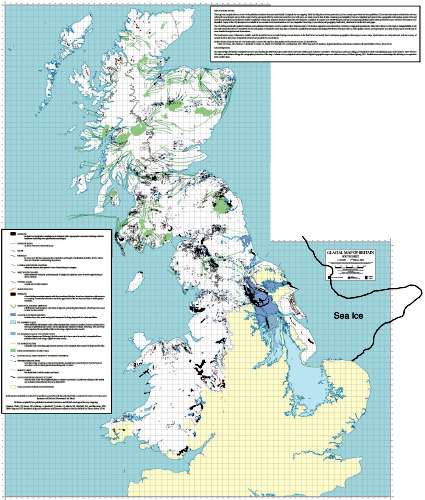 This is a wonderful map, also from Professor Clark's team at the University of Sheffield. Readers can get the original pdf files free from

I have combined the information in three maps onto one.

Things to note are that a substantial part of the British Isles was never glaciated, and that there was a huge sea ice dammed lake in parts of the East Anglia - East Midlands area.

The data is from 2002, and it is envisaged that other editions will follow as more information comes to hand.

This is part of the BRITICE project. 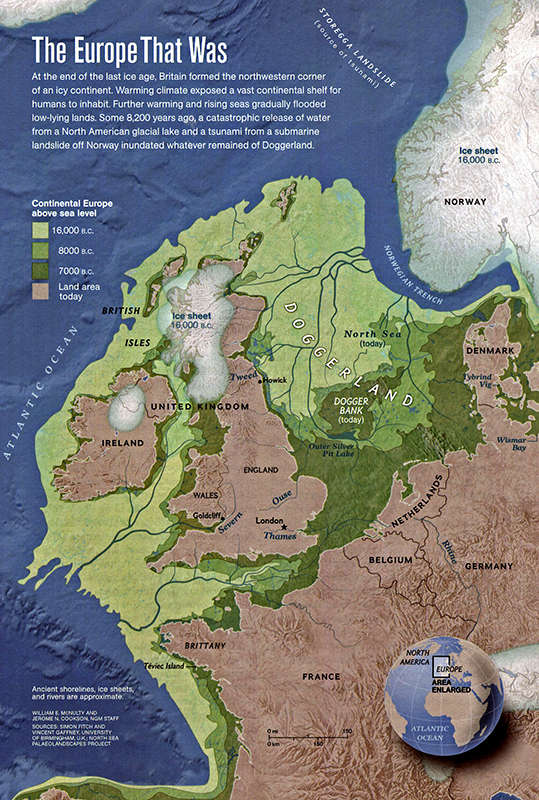 Map of the shoreline in the neighbourhood of the British Isles, ca 18 000 BP.

Note that the ice sheet shown on Britain in this map is much smaller for the same date than most other maps.

The Ice Ages limits of vegetation and sea level

A: The position of the polar timberline in present-day Europe

B: The position of the timberline at the most severe stage of the Würm Ice Age.

C: The limits of glacial debris deposited during the Würm Ice Age.

D: The limits of glacial debris deposited during the Riss and Mindel Ice Age. 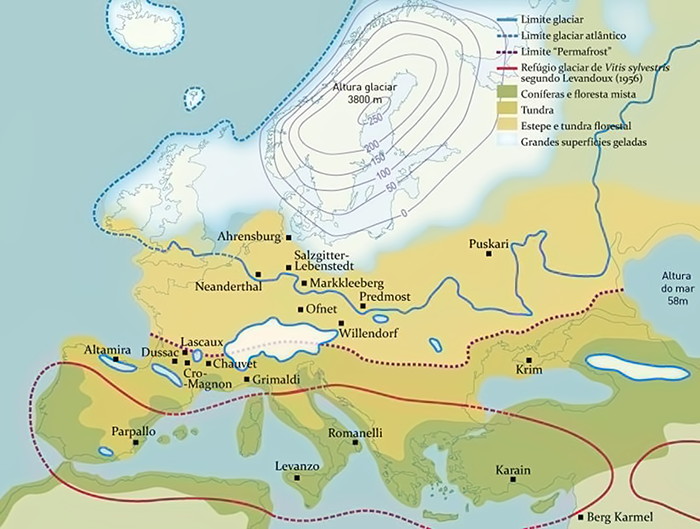 Landscape and the areas and types of vegetarion during the Würm/Weichsel glaciation.

Note that the permafrost level came to just north of Lascaux and Chauvet, and that Predmost (Dolni Vestonice) and Willendorf were within the permafrost zone. 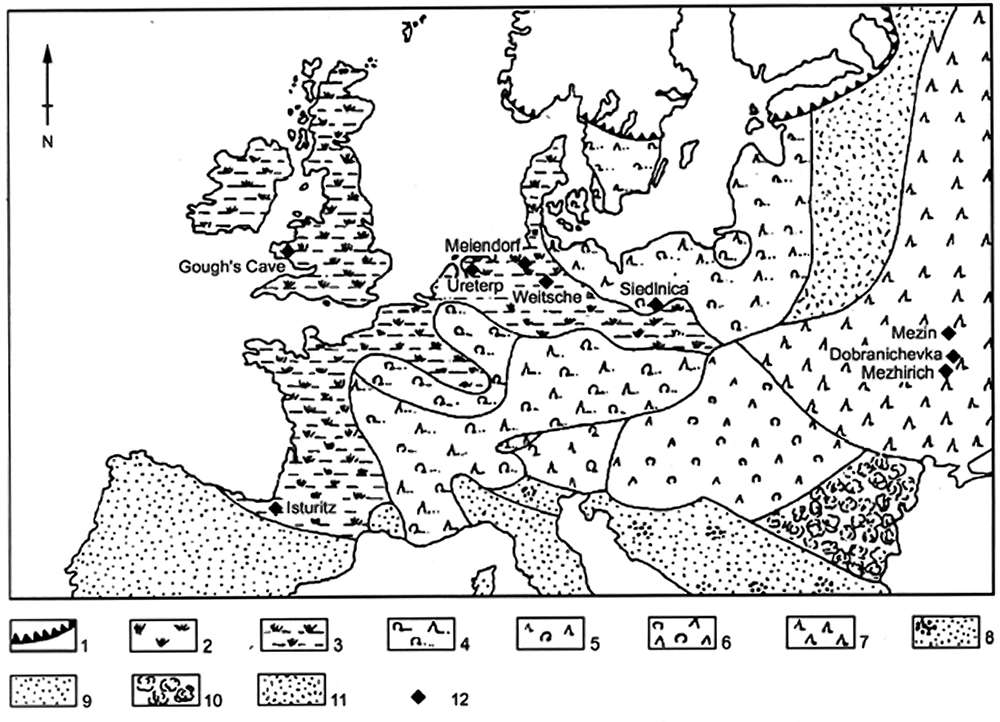 It is important to realise the changes in climate towards the end of the last ice age.

The history of the development of modern man falls into the most recent geological age, the Quaternary. It began 2.6 million years ago. From a climatic point of view, the quaternary can be divided into cold and warm periods. In contrast to climatically stable warm periods, the climate of the cold periods was characterised by changes from warmer to extremely cold phases. The current warm period, the so-called Holocene, began about 11 570 years ago. The last warm period, the Eem before 126 000 to 115 000 BP, was warmer than at present. This is confirmed by the remains of hippos from deposits near the Thames.

Between the Eem and the Holocene lies the last cold period, which is here referred to as the Vistula. It reached its peak some 24 500 years ago. Between the glaciated areas, which extended from Schleswig-Holstein in the north, to the south to the foothills of the Alps, a life threatening dry and cold frost regime expanded. About 19 000 years ago a climatically milder period began, which ultimately led to resettlement of the area by humans. From 14 650 years BP, the climate changed drastically, the temperatures increased to almost the present level. At first it was still drier in Central Europe, with wide, open grasslands, but soon the rainfall was enough to support a closed forest.

Sea-level changes during the Pleistocene.
The dotted line shows where the level would be if the modern ice caps were melted.

Note: I cannot work out where the extra water would come from for levels above that at which all the ice caps are melted.

The megaflood that cut Britain from France 200 000 years ago 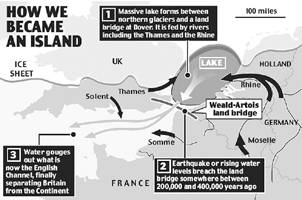 The point when Britain became an island is a defining moment in our history.

Scientists have, however, always been puzzled as to exactly how we lost our land link with the Continent.

Now researchers say they had found the answer in the shape of a massive flood which breached the ridge joining Kent and France.

They said it would have taken only days for what we now know as the English Channel to have filled with water.

The event is thought to have taken place between 200,000 and 400,000 years ago. Britain's fate as an island was sealed by a second massive flood a few thousand years later, the team from Imperial College London said.

The flood waters came from the southern reaches of the North Sea which had been dammed off into a lake by the landbridge at Dover and glaciers to the north.

Once released, the water carved out a channel 15 miles wide and 50 yards deep through the chalky soil.

'We don't know why, but the ridge was breached, triggering what is likely to be the biggest flood ever,' said Dr Jenny Collier, a co-author of the study which examined the loss of the land link.

'It could have been caused by rising water in the lake, or even by a small earthquake.'

Her team took high-resolution sonar images of the valley formed by the first flood showing it was unusually straight and wide with erosion marks. They said this evidence suggested the valley - now under the Channel - was the result of a sudden flood, delivering one million cubic metres of water every second.

The so- called 'megaflood' may have lasted several months and by the time it subsided, a vast, uncrossable waterway separated Britain from the rest of Europe. The river was the largest in Europe, draining the Rhine, the Thames, the Solent, the Rother, the Seine and the Somme. It also created a barrier to Neanderthal hunters who had previously been regular visitors to Britain. Dr Sanjeev Gupta, a co-author of the study, said: 'This prehistoric event rewrites the history of how the UK became an island and may explain why early human occupation of Britain came to an abrupt halt for almost 120 000 years.' The second flood breached a dam that had formed around a ridge of rock north of Dover. This event sent another huge torrent of water into the English Channel and further widened the Straits of Dover.

Taken together, the two floods were probably more dramatic than the breaching of the Straits of Gibraltar that flooded the Mediterranean 5.3million years ago.

"Professor Chris Stringer, an expert in early humans at the Natural History Museum in London, said: 'The timing and method of formation of the Channel has been a long-running argument - after all it really makes Britain what it is today, geographically - and the evidence presented in this paper is spectacular.' Geologists have long known that the rise and fall of sea levels has repeatedly flooded and exposed the floor of the English Channel.

During the ice ages, when much of the northern hemisphere's water was locked up in vast ice sheets, sea levels dropped by 100 yards, allowing Neanderthal men and women to walk from Brittany to Cornwall.

But even when sea levels were at their highest, humans were able to cross the 'Weald-Artois' chalk ridge linking England to France. All that changed when the land bridge was breached. The Imperial College study is published today in the journal Nature.

Maps of the extent of the Ice

My thanks to Thalion for bringing this source to my attention.

All three maps below come from an excellent source which is the printed version of the electronic journal:

Map of the maximum extent of the ice during the last ice age, around 20 000 years ago.

Note in particular the extensive lakes ponded behind the ice, fed by the north flowing rivers.

Map of the extent of the ice during the last ice age 13000 years before the present. 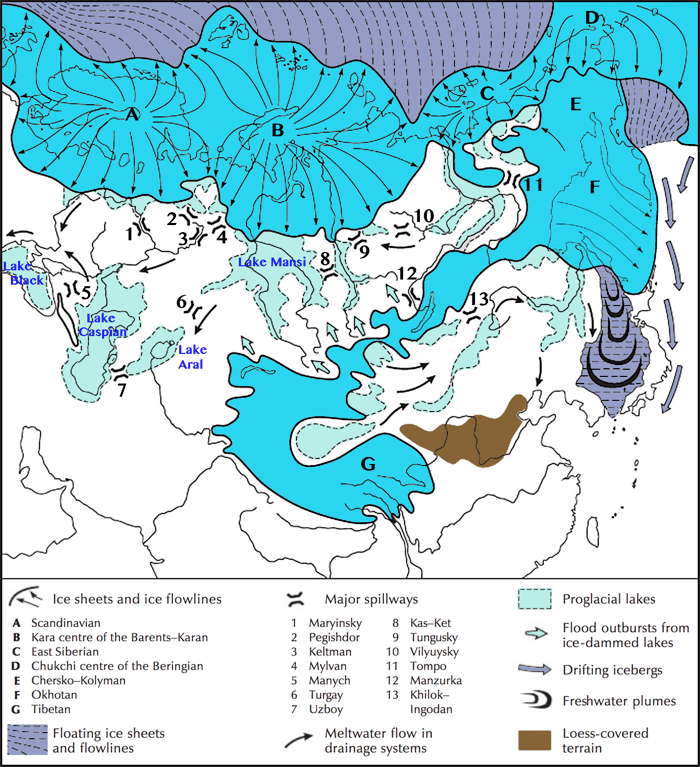 Map of the extent of the ice during the last glacial maximum in northern Eurasia, showing the ice sheets, floating ice, and the ice-dammed lakes, as well as the margins of lakes such as Lake Black (the present Black Sea, much reduced in size), Lake Caspian, Lake Aral, and the huge Lake Mansi, as well as many smaller lakes.