The Lespugue Venus is a figurine, a statuette of a nude female figure from the Gravettian period, dated to between 26 000 and 24 000 years ago. It was discovered in 1922 in the Rideaux cave of Lespugue (Haute-Garonne) in the foothills of the Pyrenees by René de Saint-Périer (1877-1950). Approximately 6 inches (150 mm) tall, it is carved from tusk ivory, and was damaged during excavation.

Of all the steatopygous (large posterior) Venus figurines discovered from the upper Paleolithic, the Venus of Lespugue, if the reconstruction is sound, appears to display the most exaggerated female secondary sexual characteristics, especially the extremely large, pendulous breasts.

According to textile expert Elizabeth Wayland Barber, the statue displays the earliest representation found of spun thread, as the carving shows a skirt hanging from below the hips, made of twisted fibres, frayed at the end. The Venus of Lespugue resides in France, at the Musée de l'Homme.

Front view of the Lespugue Venus. This venus was carved from ivory and was damaged during excavation.

The Lespugue venus, side view.

The Lespugue venus, back view.

The Lespugue venus, front and back view.

Source: Facsimile at the Venusium, a museum at Willendorf in Austria.

Photo: José-Manuel Benito / Locutus Borg
Date: May 2006
Permission: This work has been released into the public domain.

The female statuette, which I have the honour to offer a facsimile to the Society for its collections, was discovered on 9th August 1922 in the Grotte des Rideaux, at Lespugue (Haute Garronne). This cave which I had announced right here, on its discovery in 1911, has been difficult to interpret in its anterior part, because of the mixture of Palaeolithic objects with those from the Medieval period, which has not permitted the recording of a rigorous stratigraphy.

But at some metres from the entry, the layers being undisturbed, a more precise determination of age was possible. I recognised then, resuming the excavations after the war, a Paleolithic hearth, undisturbed, with a thickness of 60 - 80 cm lying over a clay with Cave Bear remains and covered with about 40- 50 cm of recent deposits.

It is in this hearth at a quite shallow depth (about 15cm deep) that I collected the statuette, a pickaxe unfortunately wielded by one of my workers causing a block to fall which had broken its front section. I gave the original to the Museum, and M. Boule, filling defects of the anterior part of the cast, has reconstituted with an approximation extremely close to reality, the original aspect of the object. We can confirm this by comparing the figure against the mouldings in the restored collections of the Society.

The statue is carved in the round in mammoth ivory. It measures 147 mm in height. The head is small and oval, the face bears no distinct features. Parallel lines to indicate hair come down on three quarters of the face and at the back to the level of the shoulderblades. The neck is thin, the chest is skinny, the huge breasts hang to the abdomen, which is small, rounded, and pushed forward.

The arms, which rest on the breasts, are detached from the trunk in their lower third, which shows the great technical skill of the sculptor. The gluteal region is remarkable for its size: the buttocks are project laterally and flattened. They have at their bottom a flange surmounted by a small eminence which seems to me to correspond to the indication of a 'fistule coccygienne' (This is unclear to me. A coccygeal fistula is defined as a fistulous opening of a dermoid cyst in the coccygeal (tailbone) region - Don )

The thighs also present a large lateral projection, the legs are short, and the feet are barely indicated. The previous fracture unfortunately involved the pubic area, which does not allow us to know if genitalia were figured. Note the presence, below the buttocks, of a singular garment shaped like a triangular loincloth, which seems to be made ​​up of braided strips, finished with a fringe. 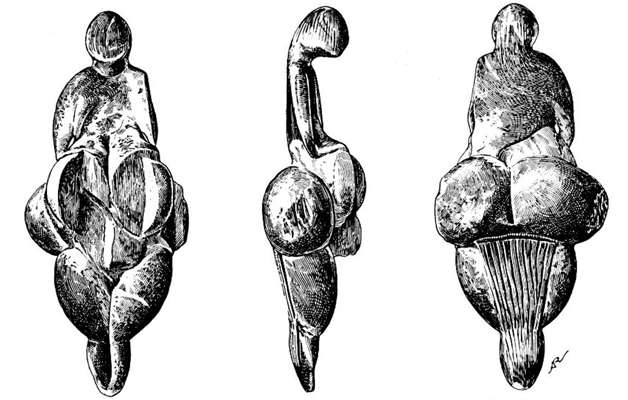 The statue as it was discovered.

This statue belongs to the group of Aurignacian steatopygous human figures that we already know from Brassempouy, Grimaldi, Willendorf, and Laussel.

It appears from certain of its characters, even to offer a way of synthesising these curious figures. Thus it shows the pendulous breasts shaped in outward form of the statuette from Brassempouy that Piette called Le Manche de poignard (the 'dagger handle'), as well as the globular head and lack of facial features of the Grimaldi statuettes, and the attitude of the arms of the venus of Willendorf.

Thus is again affirmed the homogeneity of this sculptural art with the Paleolithic, whose inspiration is unknown. Is it a purely ethnic representation, a representation of a symbolic nature or is it religious in nature? To what extent should we relate the shape of these figures to the feminine type of their time?

I shall confine myself to observing that the study of the fauna and tools of the grotte des Rideaux, which I have collected so far, allows the determination of the layer in which the statue was found as definitely being from the Upper Aurignacian rather than the lower Magdalenian, as I had thought in 1911.

On the other hand, the characters of these statues and the loincloth so far only shown on the Lespugue statue suggest that the people of our country had Aurignacian characteristics similar to those reported from Africa. We know that the discovery of skeletons at Grimaldi of Negroid type which had already suggested this hypothesis is corroborated by the similarity of the Aurignacian tools on these two continents.

If the discovery of the 'Lespugue Venus' does not yet solve all the complex problems raised by these Paleolithic human representations, it does, however, bring another element to our understanding of the beginnings of human sculpture and thus it seems interesting to discuss it here at the Société préhistorique française.