Making a replica of a Mesolithic Longbow

Photo: Courtesy of Tanja Rotert with permission of Hartmut Troßen

Being a group of traditional longbow (selfbow) archers, we were interested in making some Mesolithic type longbows. Some of the oldest findings of (almost) complete bows suited for hunting are three items from bogs in Zealand (Southern Denmark): Two Holmegaard-style bows and one Møllegabet style bow from ~ 6 500 BC and 5 400 BC, respectively. However, archery appears to be a much older technique as concluded from the findings of stone artefacts, which suggest that they were used as arrow heads and which are at least 20 000 years old. There is some confusion in literature about terminology and design, and many modern replicas of Holmegaard-style bows, should rather be called Møllegabet design1. Deformation of the stave due to the long time in the ground and drying processes have led to misinterpretation of the original shape. 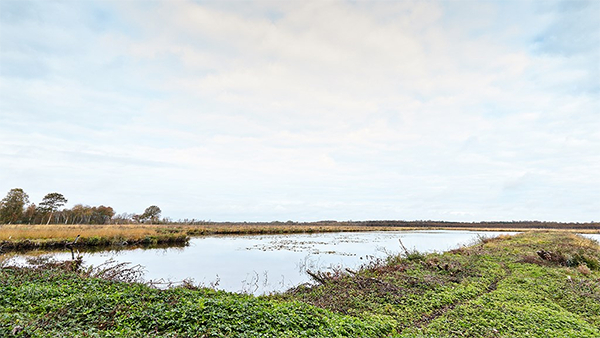 Two longbows made of elm, ulmus glabra, one only in fragments, were found in a Danish bog and are now in the Nationalmuseet i København. The fragmented bow was originally about 165-180 cm long, while the complete specimen was considerably weaker and had a length of ~152 cm. Both were shaped from an elm trunk of about 5 cm diameter. The limbs are D-shaped with the naturally convex surface (the crowned side) being the back (facing the target) and the flat side (the central part of the trunk) becomes the belly and faces the archer, see fig. 1-3. The back is exposed to extensional bending stress while the belly takes the compressive stress.

Figure 1: Photo (above) of the original Holmegaard bow: Don Hitchcock 2014
Figure 2: Photo (below) of a facsimile: rephotographed by Don Hitchcock from a poster at the Københavns Museum 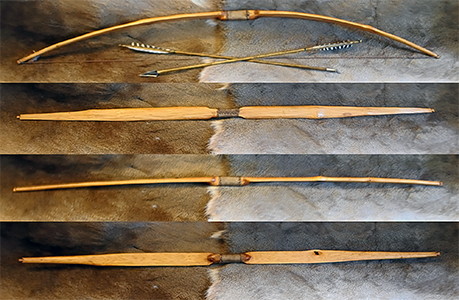 This is a replica of the oldest preserved bow , from the Holmegaard Moor in Denmark.

It is made by Greg Anderson, an avid lover of the outdoors and also a primitive skills and wilderness survival expert. It is from these passions that he came to study the ancient art of bow making. He founded North Wood Traditional Archery LLC in 2010.

The 'shoulders' of the original are very shallow and probably an artefact caused by shrinking. The last third of the limb tapers down to the nock and does not increase in thickness as in the Møllegabet design, see figure 4 ff.

The original Holmegaard bow is 1540 mm long, made from the trunk of an elm tree that had been split down the middle. The weapon has a 26 mm wide grip, which possibly didn't bend. Its limbs have a maximum width of 45 mm.

It has been postulated that there is no step or shoulder in the width of the stave (except at the grip), and the tips are not stiff, but the whole limb bends as a symmetric arch with rather flat limbs, constantly tapering towards the narrow tips.


..another misinterpretation is the allegedly 'stiff outer limb principle' in Holmegard bows. If one looks closely at the dimensions of the 2 original Holmegard finds (I have done this in my Ph.D thesis on prehistoric bows of Europe) it becomes obvious that the shoulders are only very sparsely pronounced. It appears that it is only the spot on the limb where the mesolithic bow maker decided to start narrowing the limb. There he commenced to take wood off the sides of the stem. On the smaller Holmegaard bow (Orien has posted drawings of the finds above) the shoulder can only be seen on one limb, the other limb was obviously the upper part of the elm trunk, and thus was narrowing itself a bit... The thickness of the outer limbs is not thicker as of a bow without shoulder, so it is obvious that outer limbs indeed bent quite normally in the original Holmegaard bows.


The 'true' Holmegaard bows are elm bows with comparatively wide, flat limbs, flat belly and the natural crown of the stave as back, the limb tips taper, therefore saving mass.

Hence, the Holmegaard design looks like a conventional flatbow with limbs, half-length mostly parallel, half tapered, or a very slight shoulder between inner limb and tip.


For this bow there is only a specimen in fragments. It had an original length of only 115 cm and was - although of extraordinary design - most probably used by juveniles rather than fully grown adults. Like the Holmegaard bow, the limbs are wide and flat but with parallel edges. Up to ⅔ of the length from the handle a characteristic step (shoulder) reduces the width while the thickness increases, so that the last part to the tips becomes stiffer forming a kind of a lever, and the loaded bow does not show the the circular arc shape of a Holmegaard bow on the tiller, see fig. 5. Literature frequently addresses this as a characteristic feature of the Holmegaard design, however, there are indications that the shoulder seen in the 8 500 years old Holmegaard bows recovered from the bog is an artefact due to inhomogeneous drying and shrinking of the find.


The only bow with a stiff outer limb known from prehistory is the find from Möllegabet in Denmark. This fragment shows a very pronounced shoulder and an increase in thickness in the outer limbs which shows that they were really not bending. 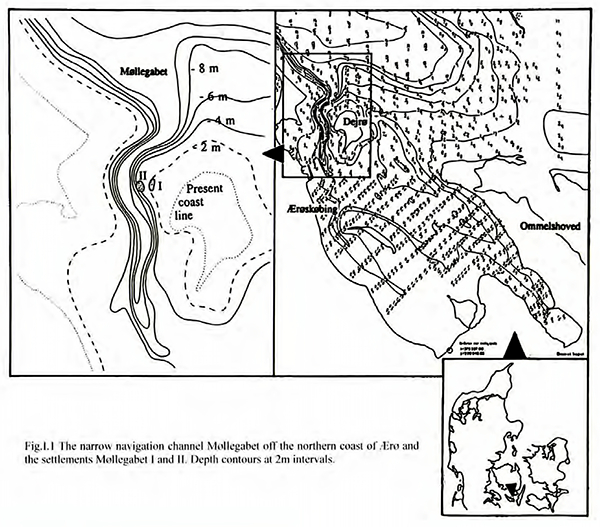 The narrow navigation channel Møllegabet off the northern coast of Ærø and the settlements Møllegabet I and II. Depth contours at 2m intervals.

Langeland Museum's underwater investigations of the submerged Late Mesolithic Ertebølle settlement Møllegabet I, off the small southern Danish town of Ærøskøbing in 1976, heralded a new era in investigations of the archaeology of the Northern European Stone Age. The submerged Stone Age settlements and graves, which have subsequently been investigated in the Baltic Sea area and in Danish coastal waters, have proved to have excellent conditions for the preservation of structural remains and items of organic material. 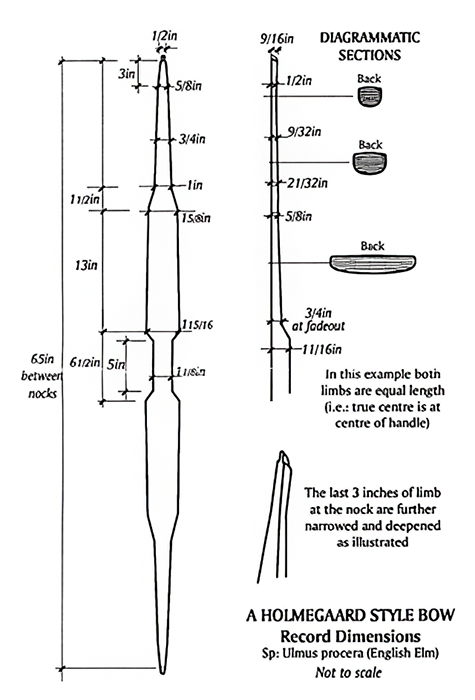 Bending of Holmegaard and Møllegabet bows.

Tip of Møllegabet selfbow with the stiff end parts and the notch, sideview (top) and view from the back (bottom).

The work started from a quarter-sawn trunk of carefully dried, crack-free Osage Orange (Maclura pomifera) wood from Hungary. The material properties of this and other woods can be found in Meier (2020).

The shape was marked on the piece with the under-bark surface becoming the (slightly crowned) back of the bow, while the layers close to the core were to become the almost flat belly. The heart wood is well suited for compressive load while the surface-near layers show a good resistance against bending stress. We obtained the crude shape with a band-saw. The stave does not need to be completely straight but it is essential that the grains are not twisted.

Figure 8 shows a bow with a straight lower limb and with a wavy bend in the upper limb. The lines of force carry through undisturbed along the grain and there are no stress concentrations. Figure 9 shows a close-up on the grain.

Side and back view of a Møllegabet Selfbow built in this course. The back is crowned.

In the original find this back, crowned side was formed by the natural curvature of the stave after the bark was removed. Those parts of the stave close to the surface can stand tensional stress quite well, while the grain usually shows a better resistance to compressional stress. The belly is flat. The long parts of the limbs are parallel in the bending part and taper towards the tips, where the limbs grow in thickness as indicated by the arrow.

These stiff ends act as a lever, see also Figures 6 and 7. 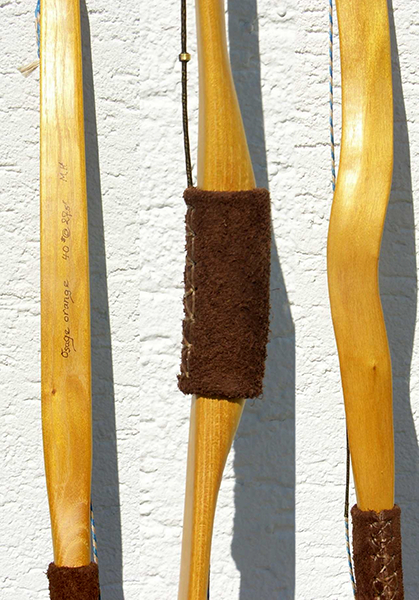 While thinning down the thickness of the limbs one tries to stay in one layer of the growing pattern of the trunk. The bend in the upper limb is of no importance for the efficiency of the bow. It is important that there is no twist (torque) in the limbs. The stress distribution over the D-shaped (cambered) cross-section is shown in Figure 10.

Representation of the distribution of the forces in the cambered limb across the back (extensional bending stress - tension) and the flat belly (compressive stress), respectively, in the parallel parts of the limbs.

In the old days the excess wood was most probably crudely removed with an adze, an axe and splitting wedges, see Figure 11 for replicas of tools suited for this purpose. The first operation, however, is the carving out of the handle. It is important to avoid any cracks to penetrate into the handle part. 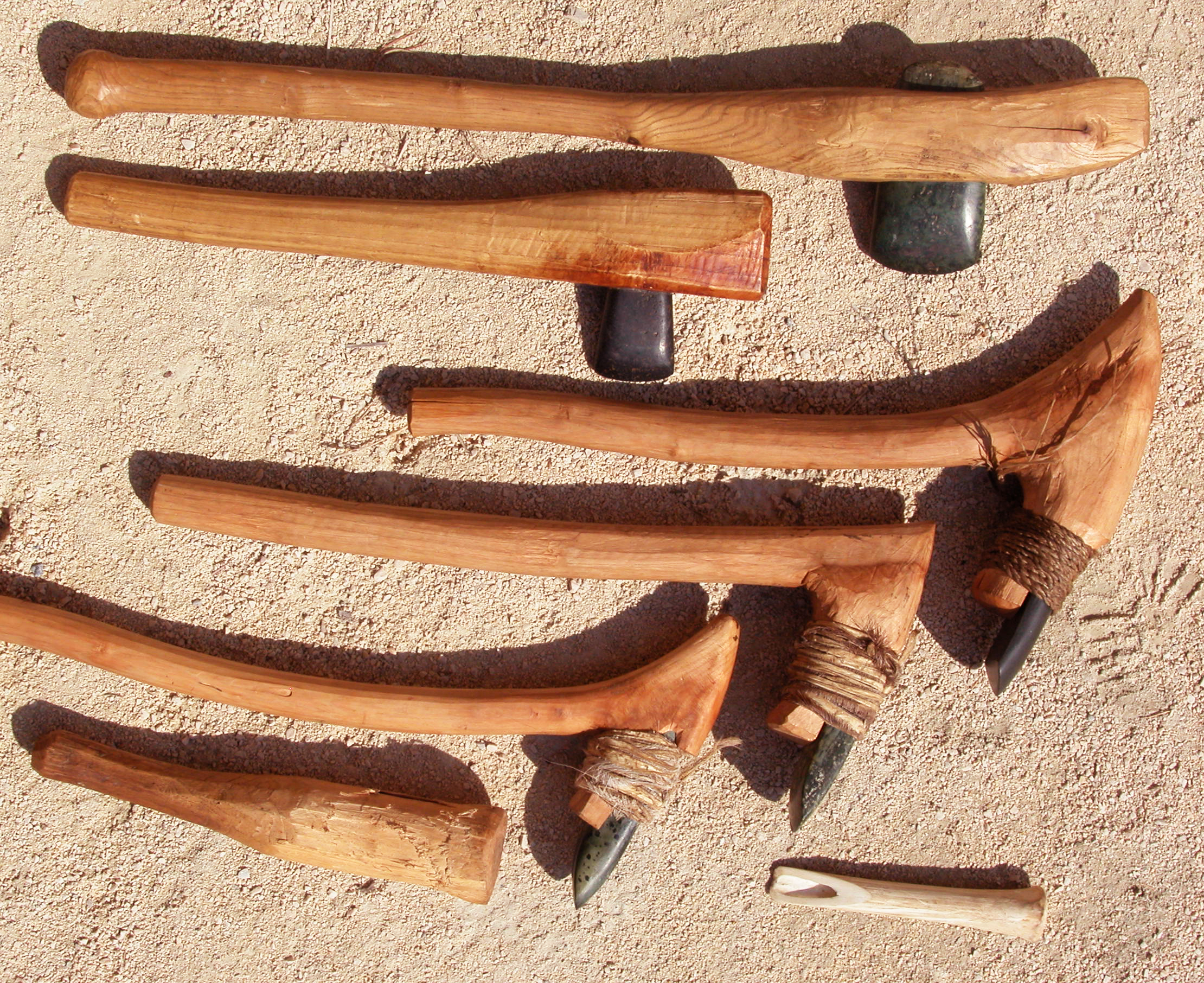 The above image is Figure 4 from 'Construction of a Neolithic Longhouse Model in the Museum of Prehistory Urgeschichtemuseum (MAMUZ)', the image titled 'Experimental archaeological reproductions of Neolithic tools', at:

Photo and text: https://exarc.net/issue-2015-3/aoam/construction-neolithic-longhouse-model-museum-prehistory-urgeschichtemuseum-mamuz
Permission: Attribution-NonCommercial 4.0 International (CC BY-NC 4.0), https://creativecommons.org/licenses/by-nc/4.0/, no changes were made, donsmaps.com is a non-commercial website. 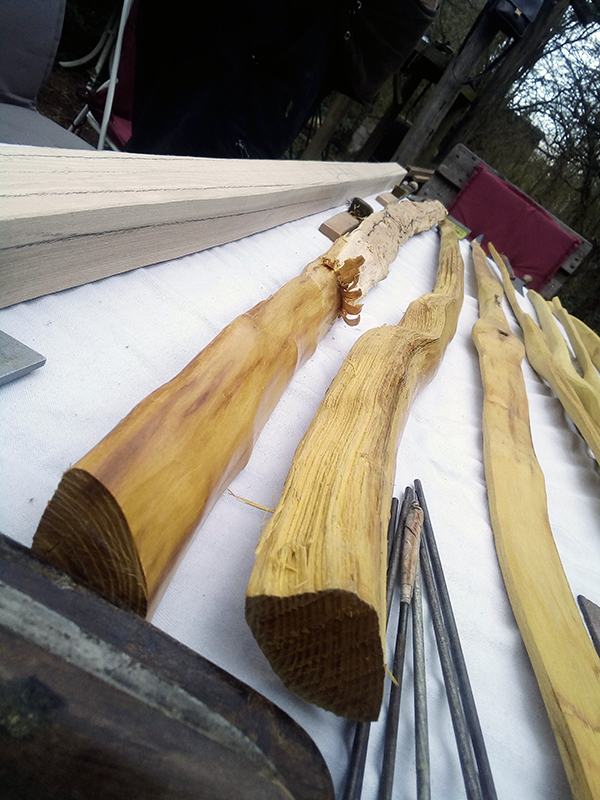 Left: parts of the under-bark wood has been partially removed. The lower part is already quite smoothed and the fresh surface shows the typical orange colour of osage orange wood. This side will become the back of the bow. The crude upper part still shows black marks for shaping of the bow.

The stave in the middle is still completely crude and the core of the trunk is up and will finally become the belly of the bow after significant thinning down.

To the right there are a number of other bows of different styles in different stages of construction.

After crude shaping of the stave, see Figure 12, honing and tillering is done with scraper-like tools. In the old days stone tools like those randomly chosen examples from different periods in Figure 11 might have been used.

The sharp edge should be straight but may also be curved. In the tillering process, the bow is fixed on a rack in the fully drawn state, and the curvature of the limbs are adjusted by carefully removing wood until symmetry of curvature of both limbs is finally accomplished, Figures 5 and 6.

The limbs have to be symmetrical, with the inner parts of the limbs doing the work while the stiff outer parts remain straight. The thickness changes rather abruptly at the step (shoulder) without tapering into the inner limbs, so that a Møllegabet bow has a shallower string angle compared with a Holmegaard bow. The latter one was also without notches to fix the string on the tips. 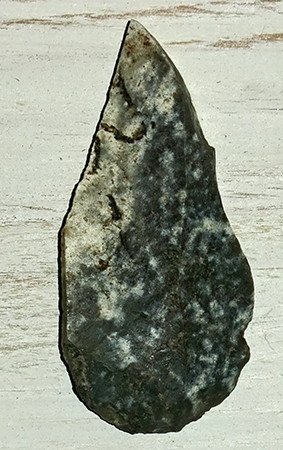 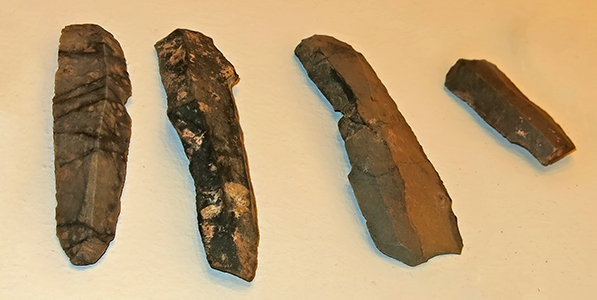 Andernach-Martinsberg, district of Mayen-Koblenz, from the excavations of Hermann Schaaffhausen 1883. 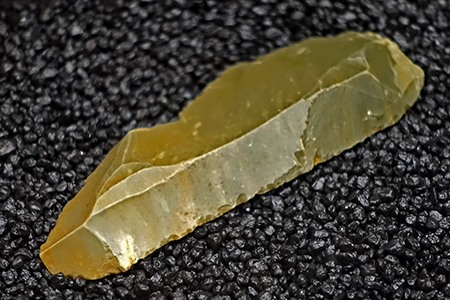 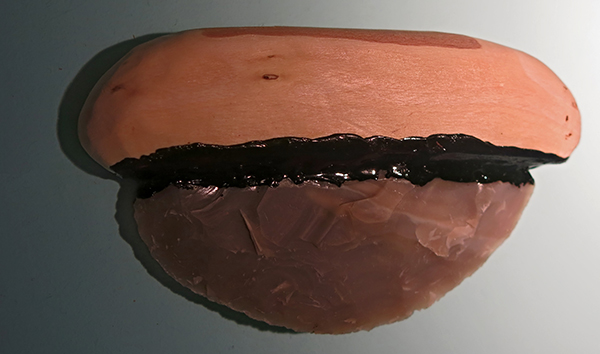 Modern reconstruction of a leaf-shaped scraper attached with birch pitch to a wooden handle. 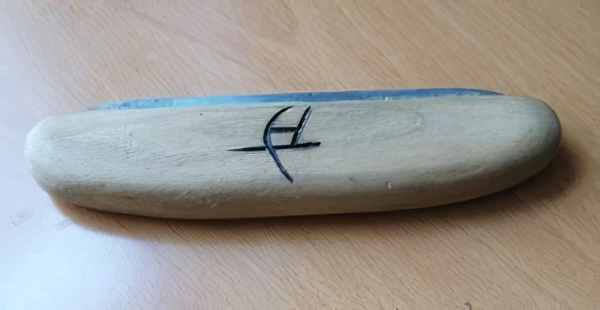 Modern tool with an old design. Length about 10 cm, thickness of the blade 1 mm.

The 'modern tool' was basically designed as the replica in Figure 13d, only the blade was a strong, straight stainless steel blade embedded in a tightly fitting wooden handle. Occasionally it was necessary to sharpen the edge with a fine stone. 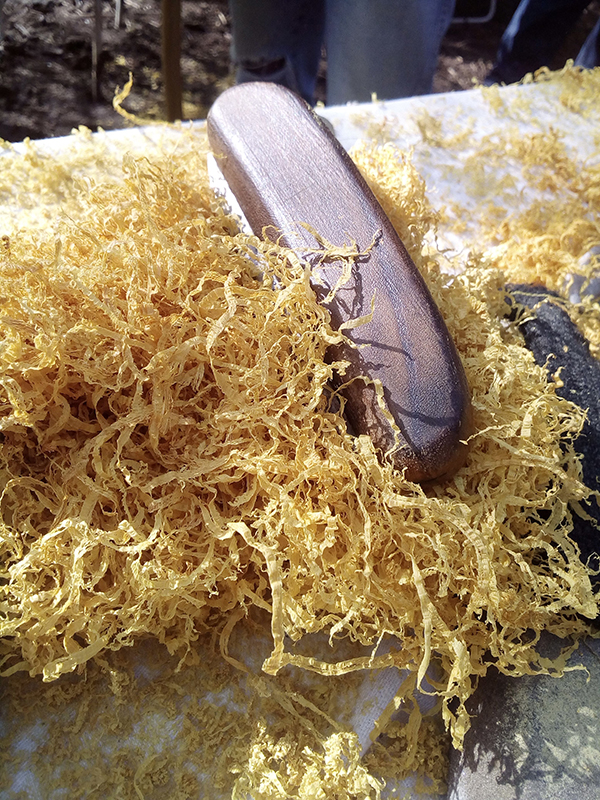 The fine tuning with of the surface with our modern tool including adjustment of the shape of the bow to the desired symmetrical shape on the tiller frame was amazingly effective removing the excess wood as long, fine and curled shavings, which were easy to control, as above.

The honing of the stave during the tillering process resulted in a smooth surface, which did not require further polishing. The surface was finally protected with a commercial antique wax. 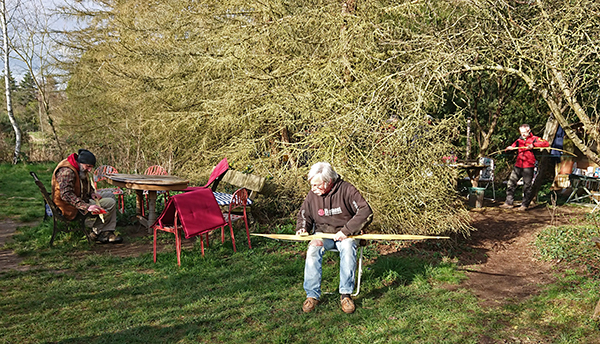 Fine tuning of the limbs. 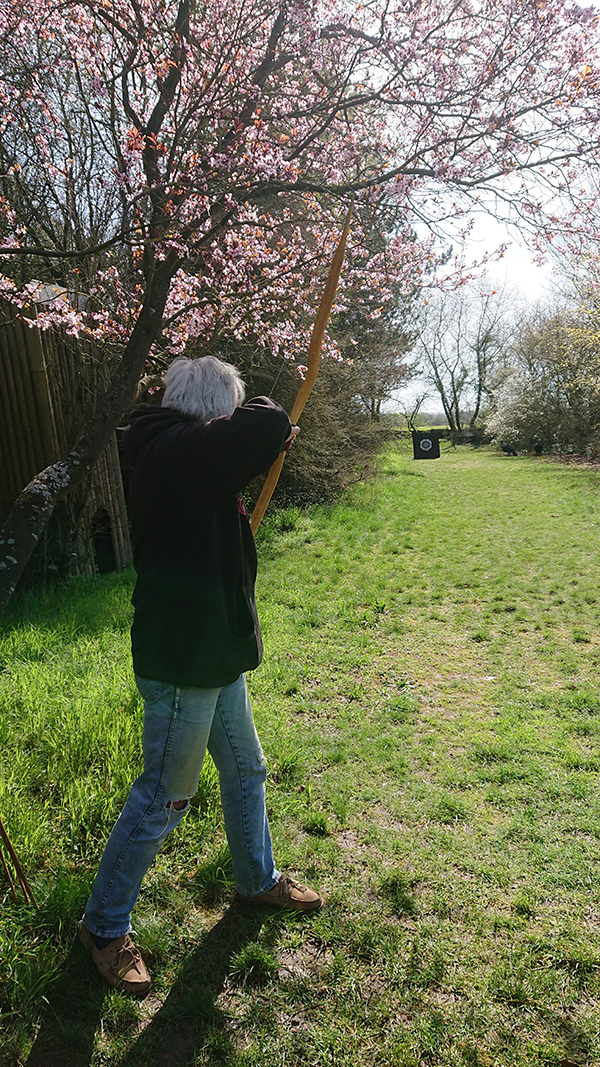 First trial at about 30 m distance.