Venus vom Galgenberg, the oldest figurine of a woman apart from the Berekhat Ram figure and the Venus of Hohle Fels ever found, was created around 30 000 B.C. Found on September 23, 1988 during the excavation of a habitation of palaeolithic hunters at Galgenberg near Stratzing (Lower Austria), broken into several pieces. 7.2 cm high figurine of a woman weighing 10 g and made of greenish, very shiny amphibolite slate, the upper body is turned to the side, in a dancing position, three-dimensional front, flat back, believed to have had cultic or religious significance. The stone material is from the immediate vicinity of where the figurine was found, and the waste material provides proof that the figurine was made in the same area. Exhibited in the Weinstadt museum in Krems an der Donau.

Galgenberg near Stratzing was a frequently used camp site between Krems-Rehberg and Stratzing. Excavations started in 1985. Charcoal and tools of stone were found at various fire places. Special constructions probably served as shelters. It is one of the world's oldest sculptures of a woman. 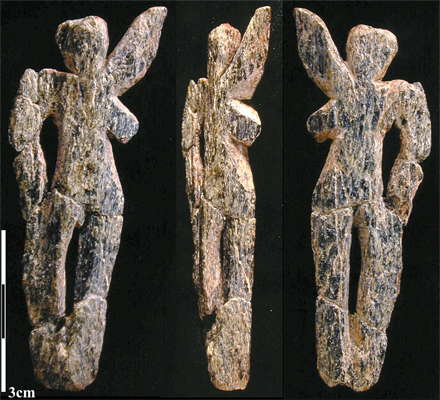 In August of 1985 at the Stratzinger Galgenberg the earthwork for a new elevated water tank for Krems was completed. Dark areas in the light loess, in which a fire place and flint tools were found, pointed to an old stone age culture. By the end of that October a rescue excavation was completed at the area, and was shown to be a camp for hunters.

On 23 September 1988 a small amphibolite slate fragment with carving traces caused great excitement. It was identified as a 30 000 year old fragment of art. In the morning of the next day 4 fragments were then discovered, which when joined formed a 7.2cm high statuette of a woman. Because of its moving, dancing attitude it was spontaneously christened "Fanny" - after the famous Viennese dancer Fanny Elssler.

It is a green serpentine carving of a nude with one breast jutting out to the left, the other facing frontward, the vulva clearly indicated, the left arm raised, and the right hand resting on the thigh, posed as though in a ritual or dance position. The serpentine comes from a nearby deposit.


It is highly probable that the statuette was manufactured at Galgenberg. The occurrence of amphibolite schist at a distance of several hundred metres from the site, as well as many small fragments of this raw material in the area of the fragments of statuette, which may be waste from the original carving, support this assumption. The statuette itself is an upright standing figurine without feet, one leg touching the other at the feet. The legs are separated by a pointed oval perforation.

The left leg is straight while the right one is flexed. The transition from the hips to the upper part of the body is rounded, which can be seen especially from the back. The right arm is also separated from the body by a pointed oval perforation and touches the thigh.

A rod like object along the leg appears in outline.

Two projections on the left hand side can be interpreted as a raised arm and the left breast in profile. The head is slightly inclined to the right. Four notches visible at an oblique view on the same side as the raised arm may indicate the main view of the head – the face is not modelled further. The clearly pronounced right shoulder makes the lack of the left shoulder especially obvious. The anatomic explanation is clear: When the arm is raised the shoulder disappears creating a 'v' with the line of the body from the neck and the head. This posture is strengthened by the head turned in this direction with a view slightly turned upwards.

Pollen analysis at the site provided evidence for the occurrence of coniferous trees like pine and larch, as well as different species of grass and herbs which are typical for a loess steppe. The palaeosoil of the lowest layer also contained pollen of ferns and spores of moss as well as evidence of deciduous trees such as birch and alder.

The inhabitants of Galgenberg used larch and pine for fires. They mostly fired fresh boughs and seldom was old, dry wood collected. Wood from larch and pine must have been rather abundant. 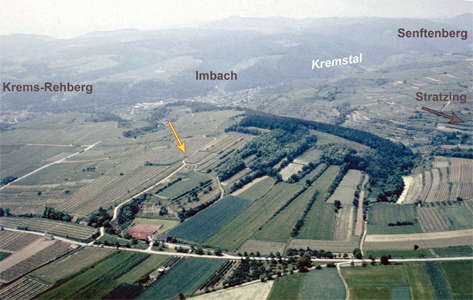 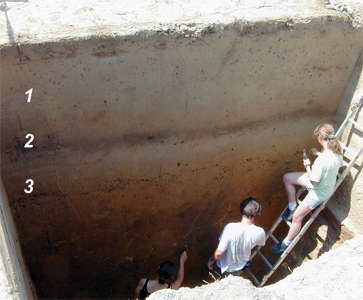 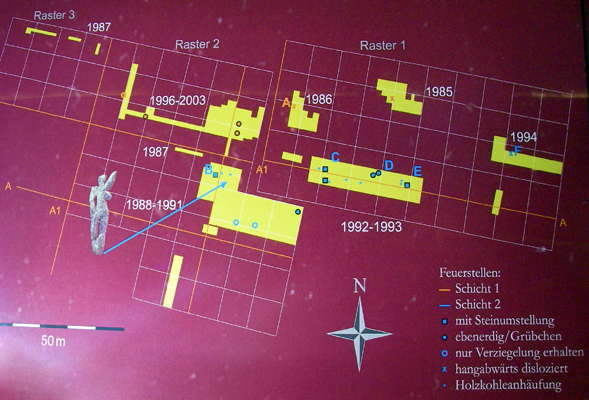 Stratzing/Krems-Rehberg, plan of the excavation area with hearths. 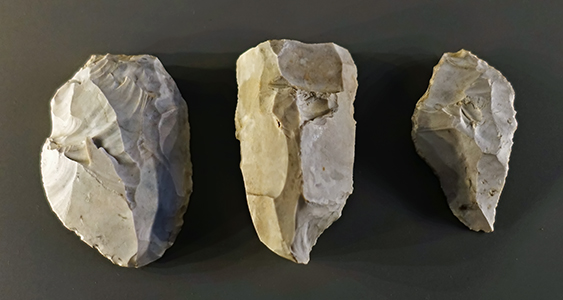 The disparate places where these fragments were found indicate that there were five contemporaneous hearths.

Refitting of tools in this manner is important in the study of how the tools were made. 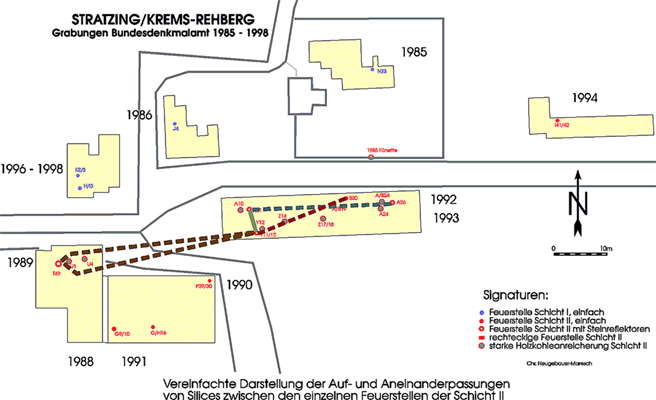 Plan of the excavations at Galgenberg. 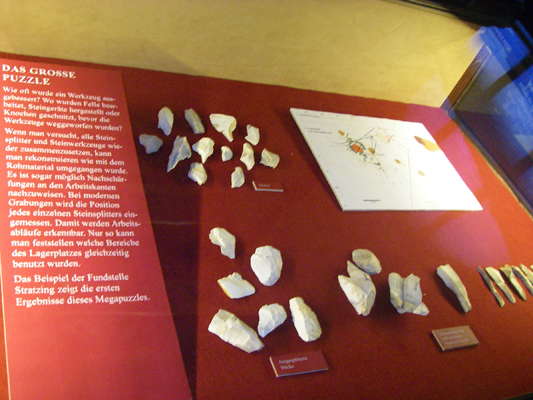 How many times has a tool been repaired before it was thrown away? Where were skins processed, stone tools manufactured or bone carved?

If one tries to assemble all the pieces of stone and stone tools again, one can reconstruct how the raw material was handled.

It is even possible detect later sharpening of the working edges.

In modern excavations, the position of each stone flake is measured. Thus the workflow can be seen. Only then can you determine which areas of the camp site were used simultaneously.

This example of the Stratzing/Galgenberg site shows the first results of these huge puzzles. 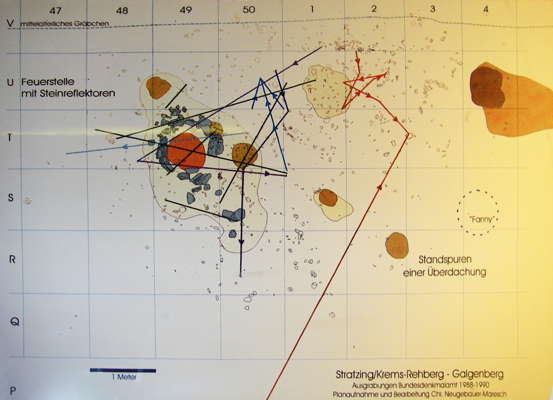 Site Plan for the area where Fanny was found.

'Fanny' - position in which the Fanny statuette was found.

(Dr. Christine Neugebauer-Maresch has published a number of papers on this important site. There were no explanatory notes with this diagram in the museum, and I have been unable to find the original in a journal or book, but it seems to be using arrows to connect the spots where particular pieces of flint were processed - Don ) 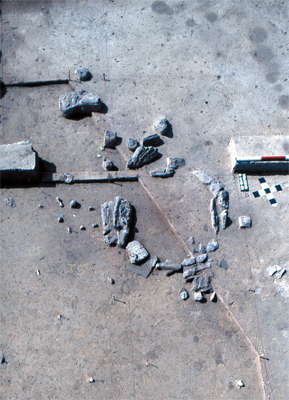 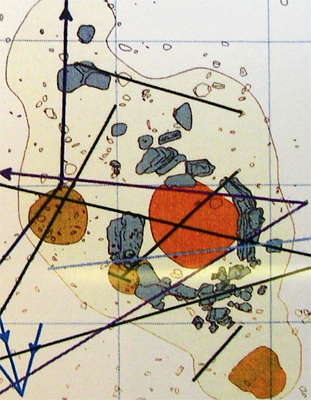 Stratzing/Krems-Rehberg, hearth B (1989) with stone encirclement and red burnt sediment.

(Note that the photograph appears to be of the same hearth shown in the figure above of the site plan for the area where Fanny was found. I have added the figure to the right of the photo, cropped and rotated to highlight the congruence - Don ) 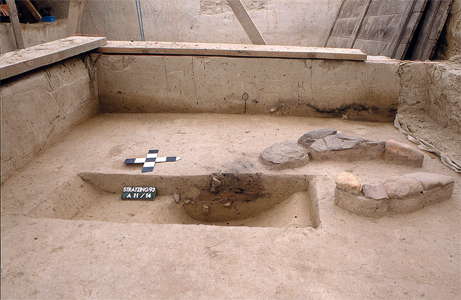 (Note the neat, smooth surfaces of the excavation, achievable because of the deposition of loess, a fine grained wind blown rock flour ground from the basement rock by the advance of ice and glaciers from the edges of the Northern Ice Sheet during the last ice ages.

This was then blown south and blanketed large areas of northern Europe. Conditions were sometimes very uncomfortable for the residents when this choking dust, cutting visibility to a few metres, was borne south by polar winds - Don ) 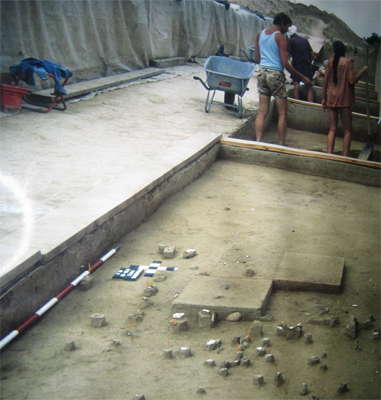 Another view of the dig. 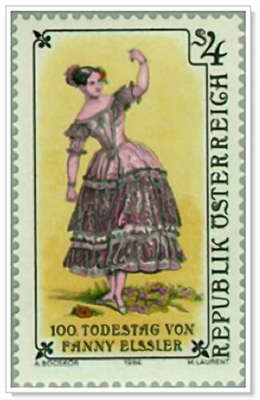 Fanny Elssler on an Austrian stamp.

An 'Ice Age Trail' has been set up at the Galgenberg site by the community at Stratzing, as an educational tour for tourists.

During the last ice age - approximately 32 000 years ago, hunting and collecting groups of humans were tramping trough the steppe landscape of this region. The people, their names and their language will always remain hidden from us. Through modern excavations, with which the finds are precisely located and with the application of natural sciences, one can reconstruct a picture of their life at that time. 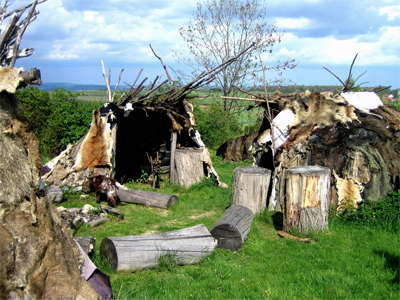 Galgenberg recreation, showing how the temporary dwellings may have been constructed.

During excavation work for a big water tank in Stratzing in 1988 a stone Venus figure, 72 mm tall, was found by archaeologists. This figure was created before 32 000 years and is thus one of the oldest stone artworks in the world. Around this place of discovery Stratzing built the Stone Age Park. Diagrams along the Ice Age Demonstration Way shift the visitor into the time of the Stone Age hunters and collectors.

Fanny with its 32 000 age is one of the earliest representation of humans in stone - a woman - in the world. The raw material was a thin plate of amphibolite slate, from which the shape was carved. Objects of this kind are the rarely found proof of ritual-religious expressions of former inhabitants. The statue is the most important find of these excavations and received its name from the excavators because of its special pose, after the famous Austrian dancer Fanny Elssler. 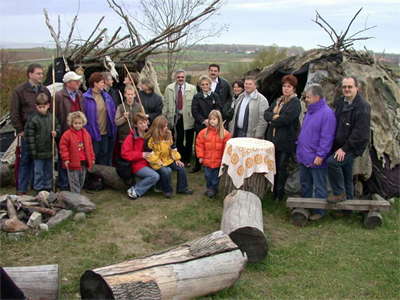 A tour group at the site of the recreation of the Galgenberg camp site.

To see the original is necessary to visit the Nature-historical museum in Vienna, a copy can be seen in the Main office at Stratzing.

The figure lay broken near the edge of an original primitive dwelling. This belonged to a camp, which ice-age hunters at Galgenberg had used for some weeks. they focused most of their activities near their fire places The fireplaces gave warmth and light and were the centre of communal life.

The hunted animals not only served as nutrition: Apart from the meat, entrails and fat one used also the sinews, bones and skin for necessary daily tools. The most important tools were however manufactured from stone, which exhibited certain characteristics. These raw materials were gathered partially in the nearby environment, but in addition, brought some kilometres to the site. By means of careful knapping techniques the flint cores were processed for blades, burins and scrapers. The remnants of toolmaking form the main part of the findings at Galgenberg.