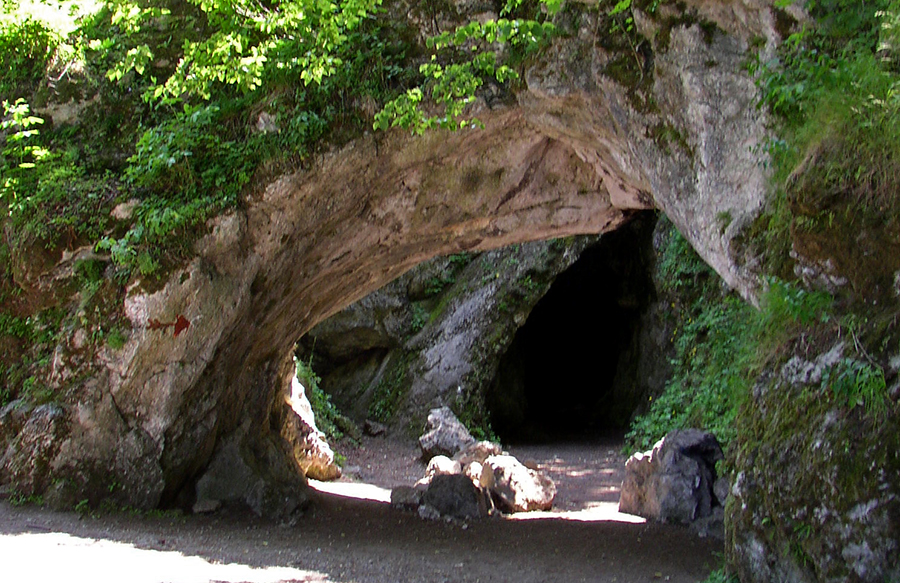 Permission: Released into the Public Domain

Šipka is a cave located near Štramberk, Moravian-Silesian Region, Czech Republic, 440 m above sea level. In 1880, a mandible of a Neanderthal child was found there. The age of the child has been estimated to be between 9 and 10 years.

The archaeological work in Šipka was conducted in years 1879-1893 by Karel Jaroslav Maška. The cave was probably alternately inhabited by Neanderthals and cave bears. The site also yielded Mousterian tools and traces of hearths. This was the first discovery of Neanderthal remains in their cultural context.

The larger of the two caves, Šipka, lies on the northern slope of the Kotouč limestone hill at an altitude of 440 m. today, after the huge excavations carried out here by KJ Maška in the first 1879 to 1882.

The discovery of a fragment of a child's lower jaw in a hearth at the left wall of the entrance to the Dachshund Hole was the first remnant of a Neanderthal in eastern Central Europe and intervened in discussions about the very existence of archaic human types.

Due to the volume of the examined soil, the archaeological yield was not very large, so the layers had to be relatively poor in the chipped industry. The bones found in Šipka mostly belong to young cave bears, but there were also mammoths, rhinos, horses, reindeer and many other species.

According to Maška, in the back part of the long-mined Devil's Hole, there was a 'fireplace belonging to the lower cultural layer. will increase 2-5 cm, an intact layer of fine coal powder and under this in the pop / / and the bone of a cave bear. In the same layer around the hearth lay the remains of reindeer ... ".

According to Maška, in the back part of the long-mined Devil's Hole, there was a 'fireplace, belonging to the lower layer of culture. It consisted of large stones in a circle, which were conspicuously smoothed on their upper parts, while other nearby stones were untouched in this way.

In the middle of this wall of stones was an intact 2-5 cm layer of fine charcoal and below this in the ashes were the bones of a cave bear. Reindeer remains lay in the same layer around the hearth.'

During archaeological research, 80 thousand bones and teeth were also found in the cave sediment, from various animals, the most recognisable of which were remnants of cave bears who used this space for a very long time as a den. In addition the bones of cave lions, hyenas, wooly rhinoceros, mammoths, European bison, aurochs, musk ox, leopards, musk ox, wolverines, reindeer and elk were found here. Overall bones from 130 types of animals were found in Šipka cave.

The cave of Šipka became world-famous after the lower jaw of a Neanderthal child was found there. This find had a deep impact on the scientific disputes over the existence of the Neanderthals at that time. The excavation had started in 1879, the jaw was found a year later in about 12 m from the entrance, in front of the a pit called Jezevčí díra ('Badger Hole'), in a small niche almost at the original ground level (at a depth of 170 cm), near a Middle-Palaeolithic fire place. The Šipka Cave is a relatively small cave, divided behind the entrance part into two corridors: Jezevčí díra ('Badger Hole') and Krápníková chodba ('Dripstone Corridor'). In addition, the cave yielded a large assemblage of stone tools. Two other fire places stem from the Middle Palaeolithic, and a hoard of bronze items belongs to the Bronze Age. Unfortunately, the find of the lower Neanderthal jaw was destroyed in a fire at Mikulov Castle in 1945. 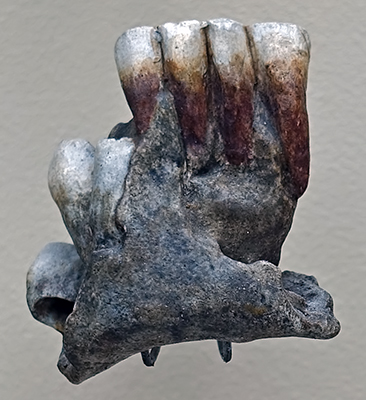 An archaeological find that no longer exists today is referred to as the 'Šipka jaw'. It is a fragment of the lower jaw of a Neanderthal child who died at the age of about 8 to 10 years old.

It was discovered in the Šipka (Arrow) cave near Štramberk on August 26, 1880 by archaeologist Karel Jaroslav Maška, a high school teacher in Nový Jičín. The jaw lay in the ashes of an ancient hearth 140 cm below the surface. A large number of animal remains and stone tools made from the local chert, but also from flint, were also discovered on the site. The discovery is unique in that the jaw was the only direct remnant of Neanderthal man in the Czech lands. In its time, it became almost a world archaeological sensation.

Today, this important archaeological find no longer exists - it was destroyed along with a number of other unique and important artefacts and files in April 1945, when the castle in Mikulov burned down at the end of World War II. Today there are only facsimiles. 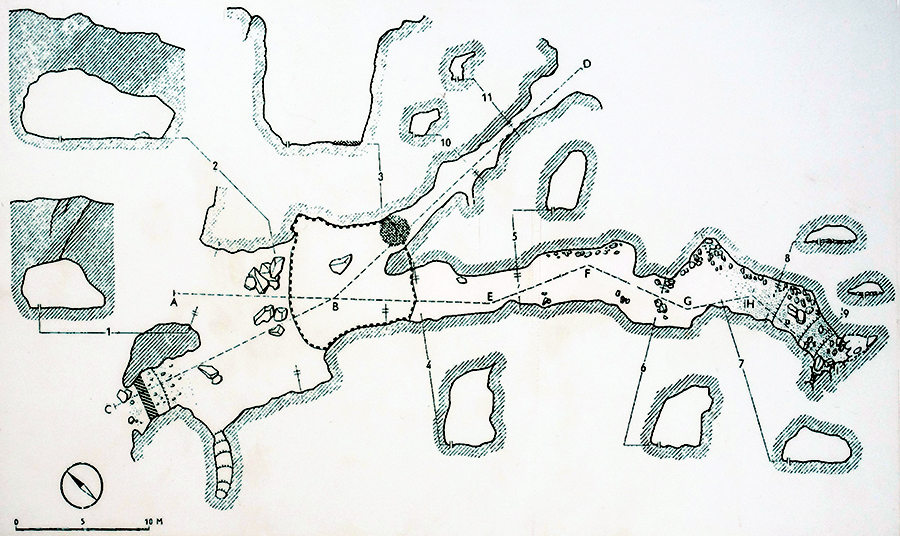 Plan of Šipka cave. At the beginning of the shorter corridor, under the collapsed ceiling, a fireplace is indicated where the Neanderthal jaw was found. 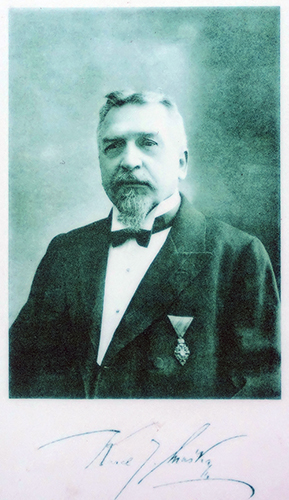 Photo: Not recorded, but obviously originally from the possession of Karel Jaroslav Maška, since it is signed.
Rephotography: Don Hitchcock 2018
Source and text: Display, Anthropos Pavilion/Moravian Museum, Brno, Czech Republic 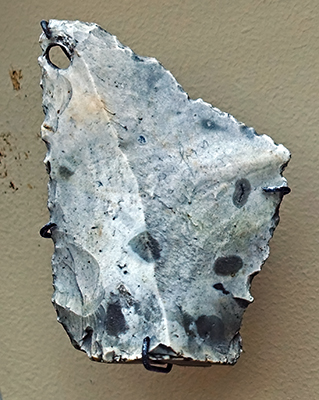 ( This is an interesting piece, for a number of reasons:

Firstly, it is quite angular, while most sidescrapers are rounded, and in addition the edges of the scraper are fairly straight.

But there is also a hole in one corner. It is likely that this is the result of a sub-oval inclusion having dropped out of the piece, rather than the piece having been originally pierced. Nevertheless, it would have made the piece more valuable, since it could have then been secured from loss by a light cord (Neanderthals were able to spin and ply cord) or a leather thong.  - Don ) 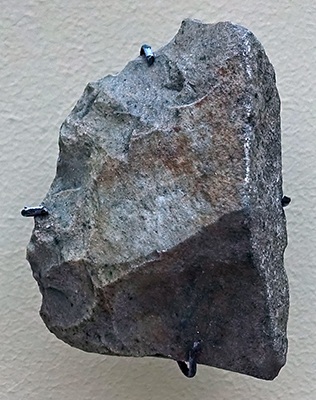 ( This sidescraper has been modified with notches to allow it to smooth rods of wood, antler and bone - Don ) 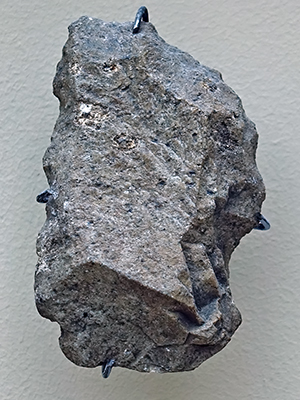 ( This roughly made tool of inferior material was obviously only ever intended for a quick and useful tool for smoothing larger rods, with no attention to workmanship - Don ) 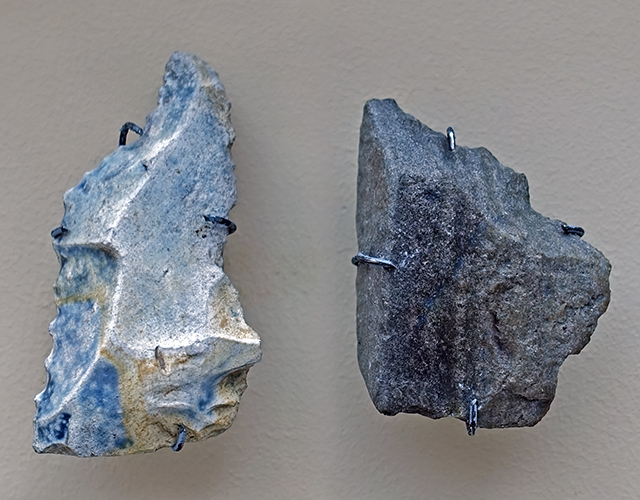 ( These tools were labelled as quartz (or quartzite) blades. They appear, however, to be notched scrapers, with more care and technique lavished on the left hand example than the other. In fact the left hand piece may well have done duty as a notched small knife or meat saw - Don ) 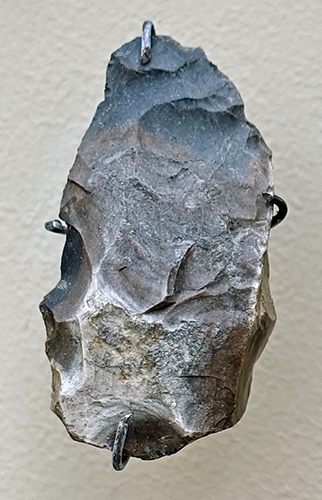 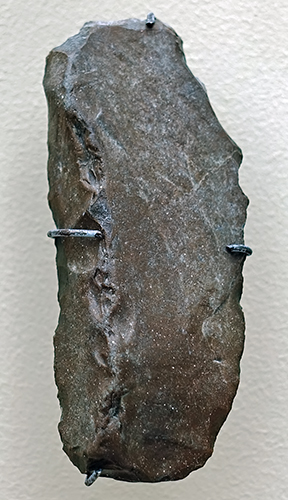 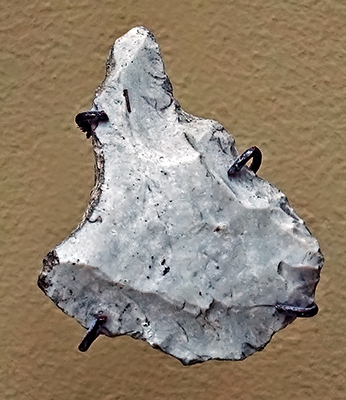 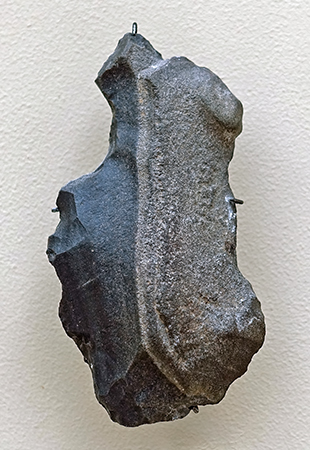 ( I interpret this to mean a burin, though it may mean 'notched' - Don ) 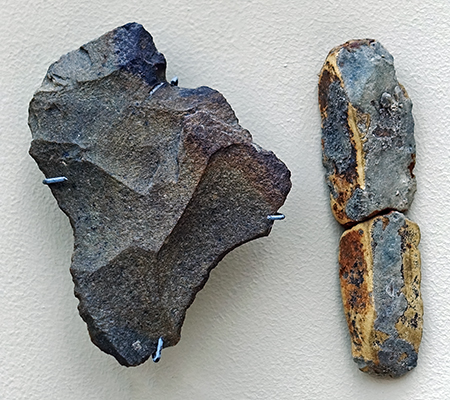 ( The flake appears to have been used as a scraper. The blade is of porcellanite, which is a hard, dense rock somewhat similar in appearance to unglazed porcelain. It is often an impure variety of chert containing clay and calcareous matter. Porcellanite has been found, for example, in Northern Ireland, Poland and the Czech Republic. - Don ) 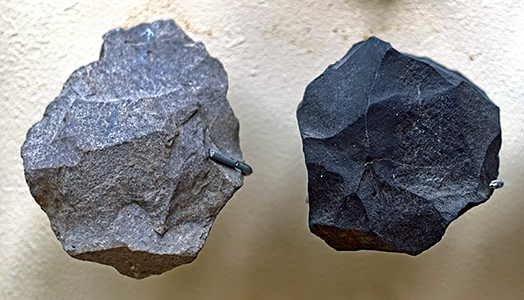 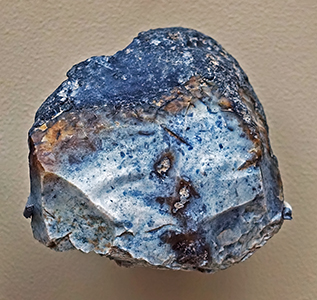 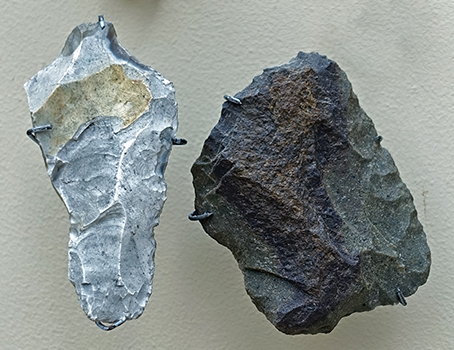 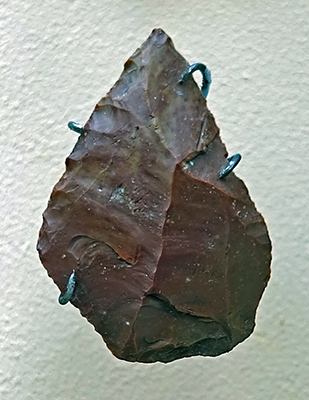 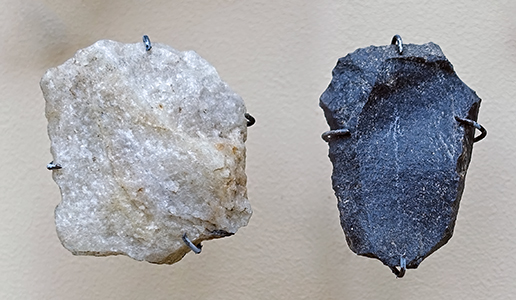 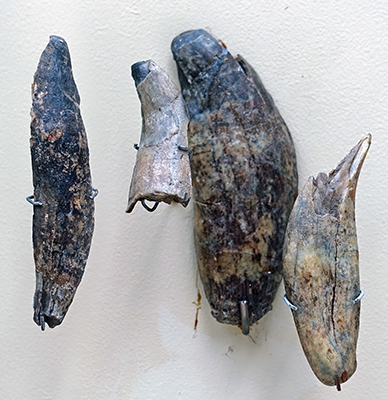 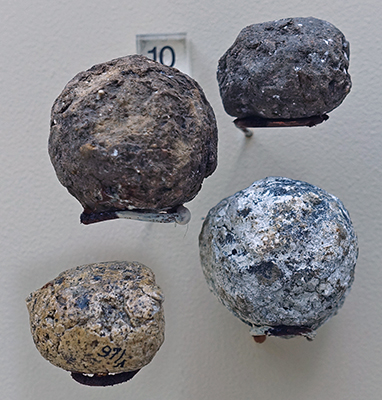 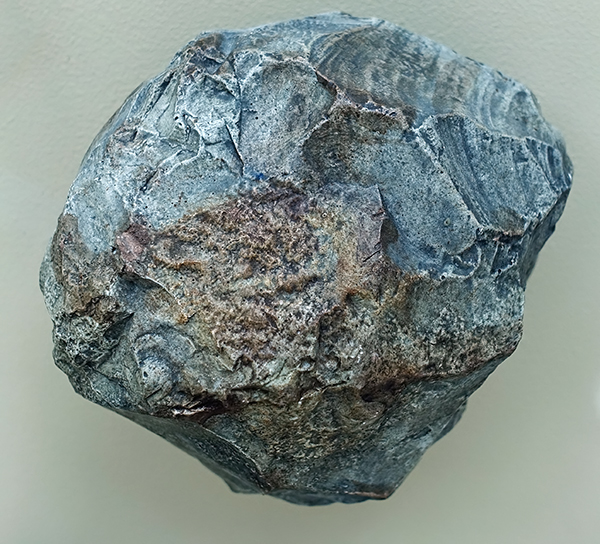 A number of flakes have been struck from this core or nucleus.