Pasiega Cave in Spain was of mostly academic interest until the discovery that some of the art in the cave was put there by Neandertals. This is a revolution in our understanding of the Neandertals. Here is the background to that discovery, with many drawings of the art of the cave from the old master himself, Breuil.

At last we now have unequivocal evidence of Neandertal art on the wall of a cave.

When Neandertals were first described on the basis of skeletons found in the Neander Valley in Germany, they were presented as not quite human. 'Neanderthal' has since become an insult for someone who was lacking in intelligence and culture.

Steadily, evidence has grown that Neandertals had most of the cultural abilities of anatomically modern humans. They had fire, they buried their dead, and used ochre as part of the burial ceremony, they drilled holes in seashells to create personal adornments, they created sophisticated flint tools.

What has been missing up until now is evidence of their artistic ability, in particular art on the walls of caves, such as is much in evidence for anatomically modern humans, such as those from the Magdalenian. Finally this lack has been rectified, with discoveries of Neandertal paintings in three separate caves in Spain: a red linear ladder-like motif in Cueva de La Pasiega in Cantabria in the far north of Spain, a hand stencil in Maltravieso (Extremadura), and red-painted speleothems in Ardales (Andalucía). 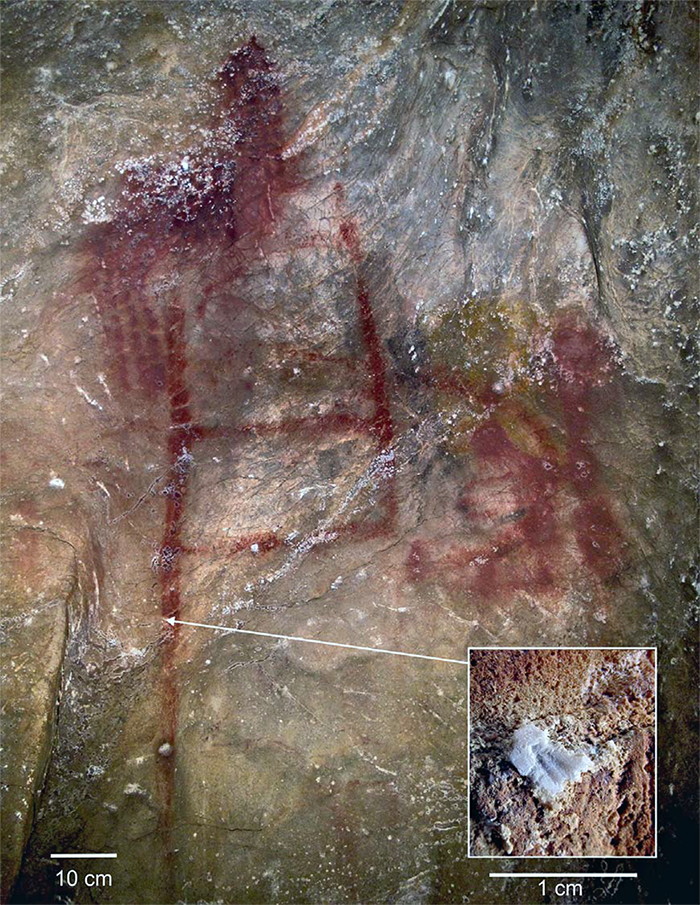 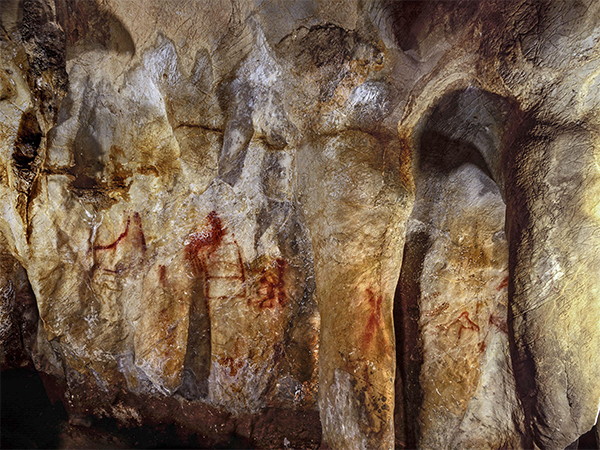 This excellent photo shows the scalariform sign in its local environment. 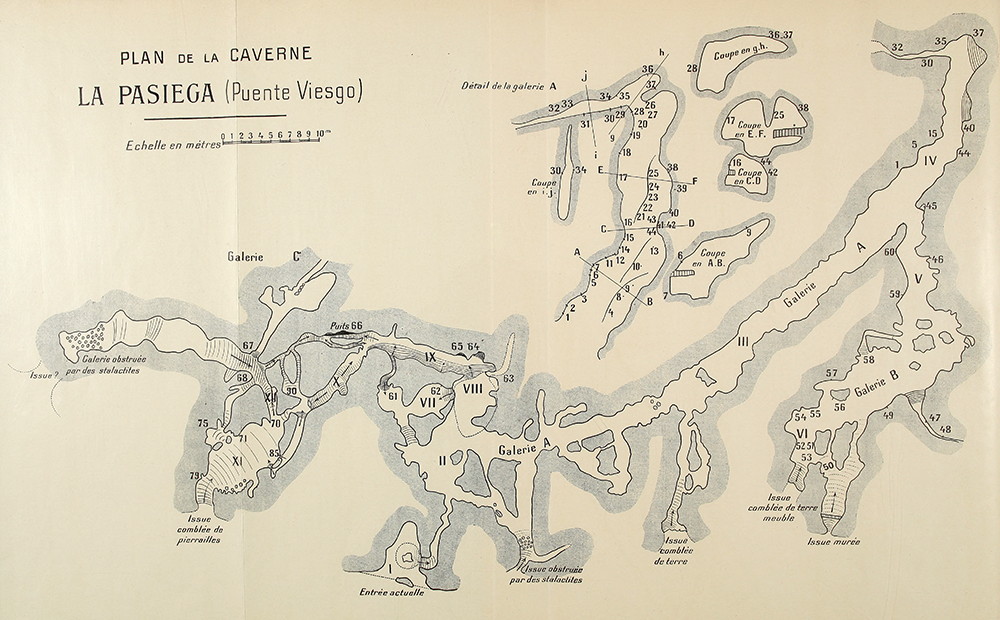 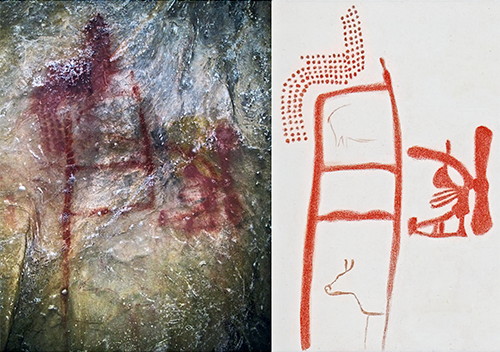 (left) Photo of the motif.

( note that only the ladder shaped image is thought to be by Neandertals. The other images are probably later additions - Don )

Early dates for 'Neanderthal cave art' may be wrong

Doubt has been cast on the dating for the Neanderthal Cave Art, as in a recent paper by Aubert, Brumm, Huntley (2018).

My thanks to Jillian A Huntley, one of the authors, for access to this paper:

As the authors point out, 'The key condition is demonstrating an unambiguous stratigraphic relationship between the [dated carbonate] sample and the art whose age we wish to constrain' (Hoffmann, 2018). However, establishing this relationship is not necessarily straightforward. In our opinion, it is possible that Hoffmann (2018) unintentionally dated carbonate deposits that were a part of the rock face, or 'canvas', upon which the images were created, and which may be far older than the artworks.

At La Pasiega and Maltravieso, Hoffmann (2018) did not cut a section through the carbonate deposits into the ‘canvas’, nor did they completely expose the underlying paint. Doing so would have allowed them to clearly observe the stratigraphic relationship between the layers of dated carbonate materials, the paints of the adjoining visible artworks, and the ‘canvas’. Instead, in each case the team scraped the carbonate deposit until they considered that it was changing color (Hoffmann, 2018).

This was seen as indicating that they were coming close to the underlying paint of the artwork, and hence they stopped sampling at this point. The team then dated the sampled carbonate under the belief that it had formed on top of the paint layer corresponding to the nearby artwork, and thus could provide a minimum age for the art. But without directly exposing any part of the putative paint layer it is not possible to be certain that an apparent color change demonstrates that it is paint underneath the carbonate (Aubert 2017).

The color change noted during sampling might only be an indication of the proximity of ‘canvas’, not paint. Indeed, it is possible that, owing to differential weathering, the part of the ‘canvas’ covered over by carbonate deposits could be different in color to exposed areas of ‘canvas’, to the point where it could be mistaken for paint if not directly observed. Moreover, in our view, a color change is not evident from most images in the paper (Hoffmann, 2018). 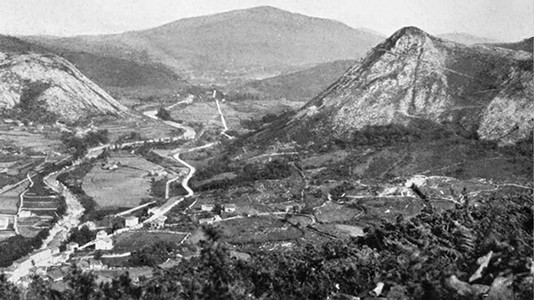 Valley of the Rio Pas at Puente Viesgo, Spain.

Over half way up the farther side of the prominent peak is the cave of La Pasiega and a little lower down on the side facing the river (within view) is the famous Castillo cave and grotto where man lived periodically almost from the earliest stone age down close to historic times. 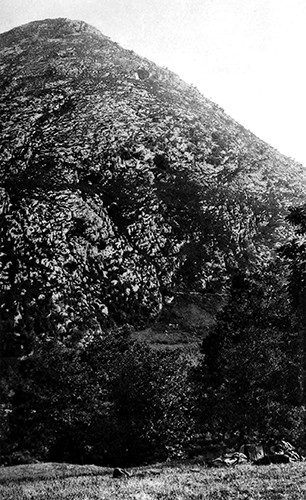 The slope of Picacho, where the entrance to La Pasiega may be found. 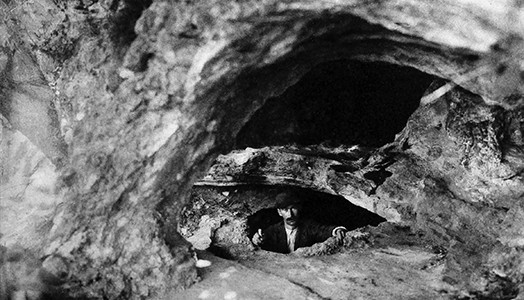 Entrance to La Pasiega circa 1911.

The man in this photograph is Alejandro Mena Garay, right hand man of Obermaier and chief of the Spanish digging workers. He holds a candle in his hand, emerging from the cave.

( My sincere thanks for this useful identification to Alejandro Mena Campuzano, his great grandson, p.c. - Don ) 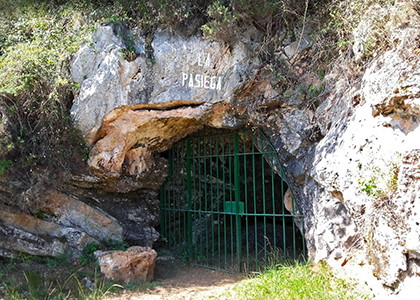 Entrance to La Pasiega in August 2016.

( comparison with the photograph above shows that the entrance has been enlarged to permit easier access, but not excessively so - Don ) 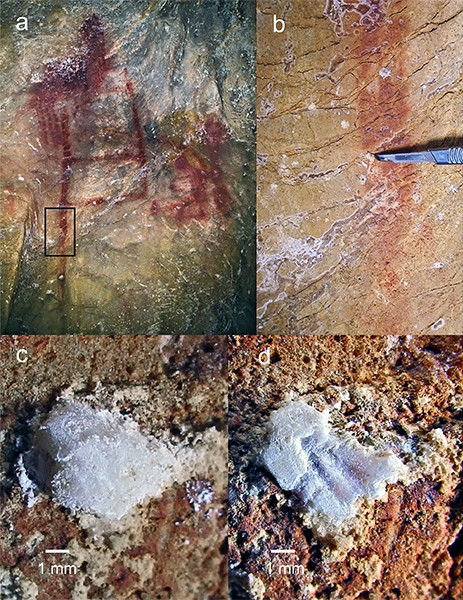 (a) Scalariform motif; the black rectangle denotes the area enlarged in (b).

(b) The scalpel points onto the carbonate crust before sampling.

(c) The carbonate crust after the surface was scraped for initial cleaning.

(d) The carbonate crust after sampling, red pigment is visible in the centre, clearly underlying the remaining carbonate. 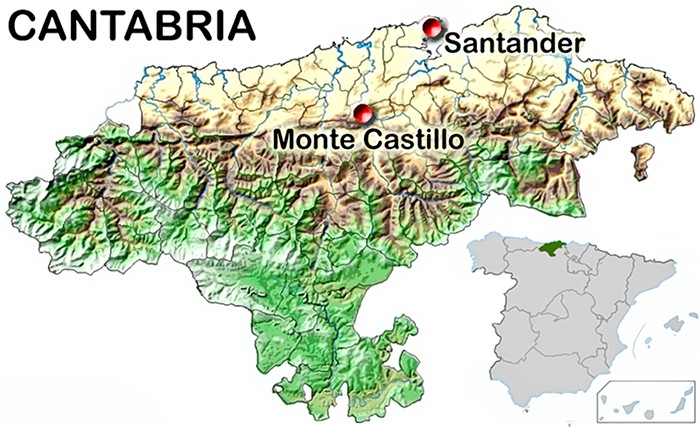 La Pasiega cave is one of the caves of Monte Castillo, the locality shown here, in northern Spain. 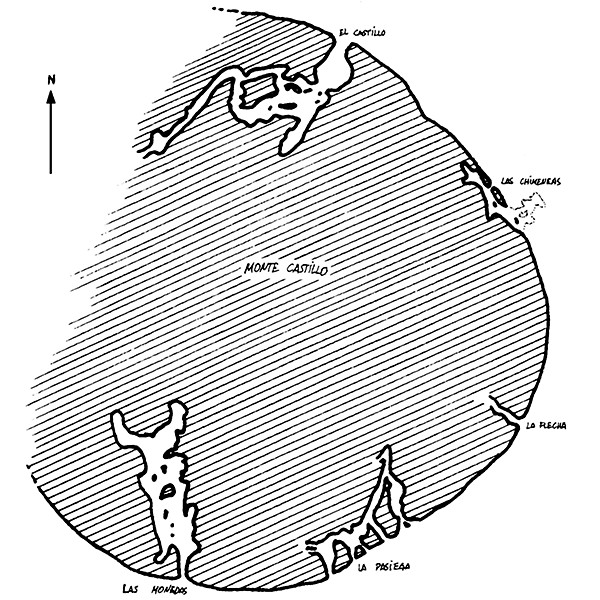 Map of the El Castillo complex of limestone caves in which Cueva de La Pasiega is located.

It contains the most convincing evidence for Neanderthal art. 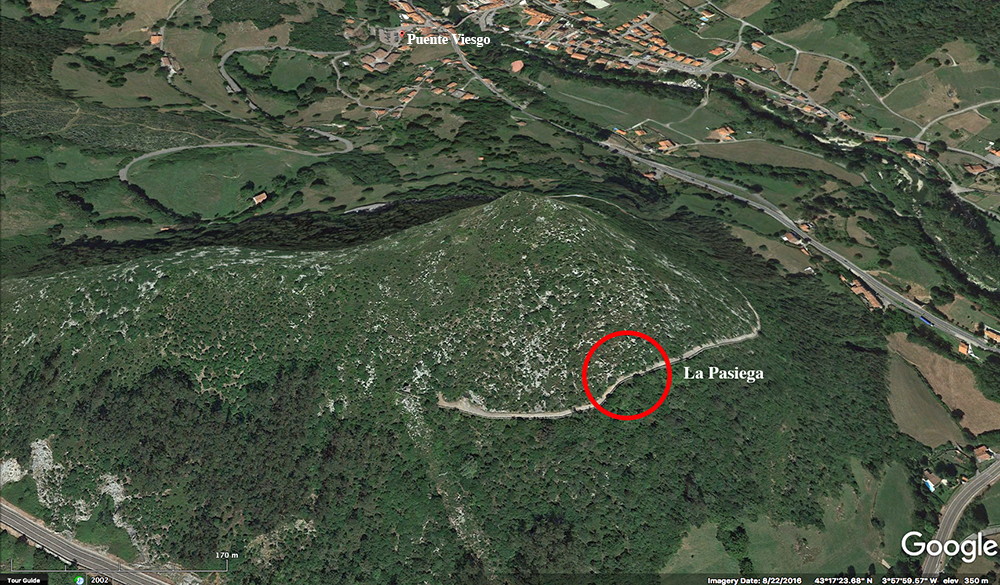 Satellite photograph from Google Earth of the El Castillo site.

The view has been tilted to indicate the local relief, with the cave complex on the limestone hill of Monte Castillo. 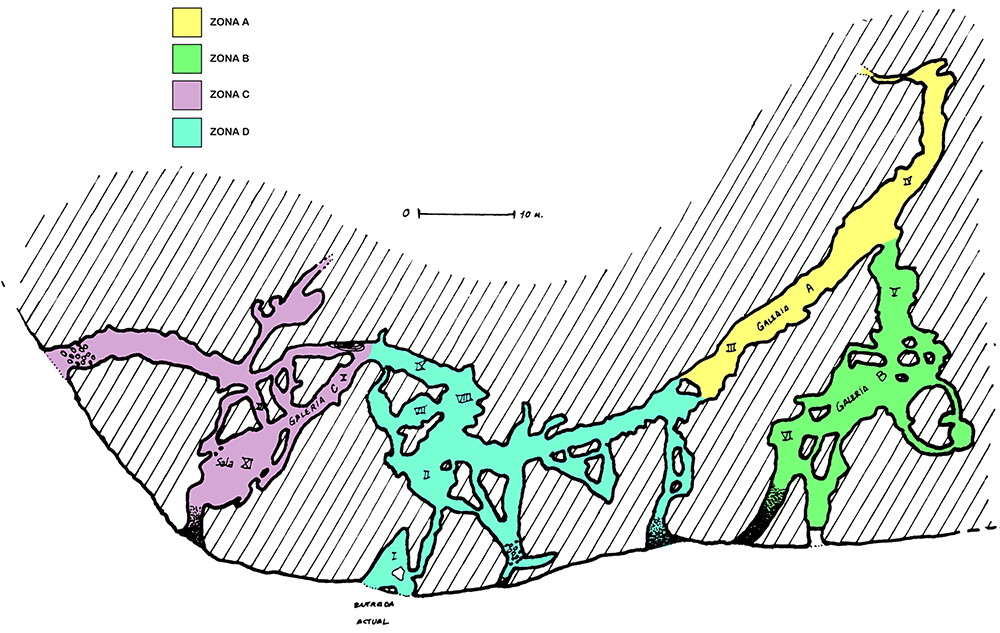 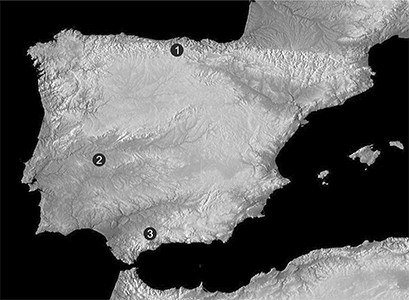 Map of the Iberian Peninsula. The dots indicate the locations of the three cave sites. 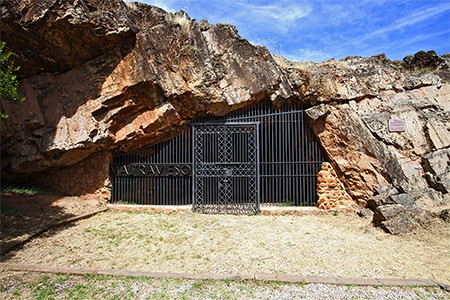 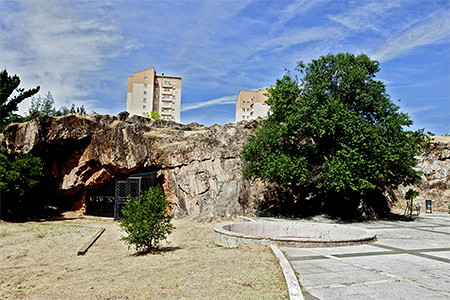 Entrance to Maltravieso cave. Unusually, it is within the boundaries of a town, Cáceres. 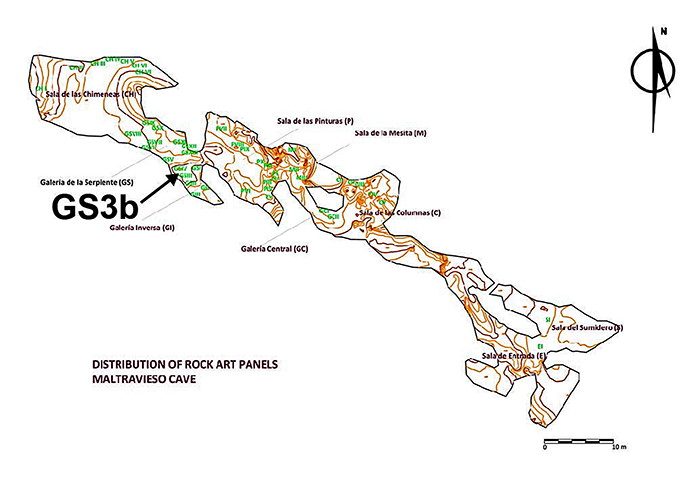 Map of Maltravieso cave. The painted panels are in green. 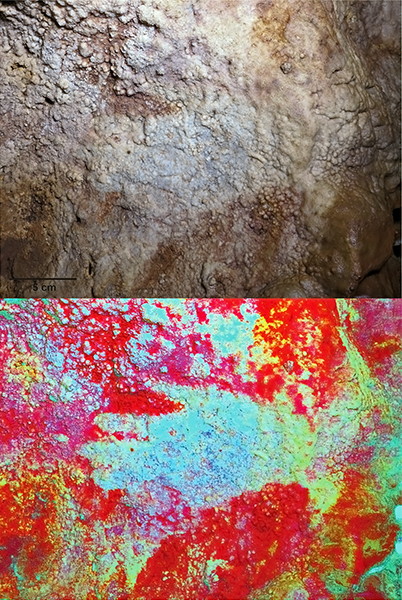 The upper picture shows the original photo, the lower is the same picture after application of DStretch, a false colour program which brings out images that are otherwise close to invisible.

This image shows the chamber inside Maltravieso cave where three stencils hands have been identified.

( note that because of the clarity of the hand stencils in the image above, they are most unlikely to include the one used to prove that it was done by a Neandertal, which is mostly covered by calcite, and almost invisible - Don ) 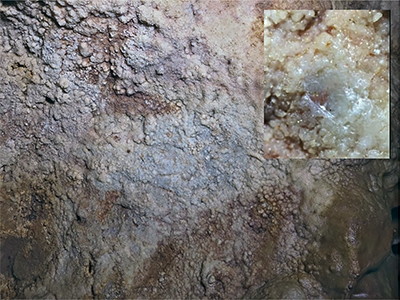 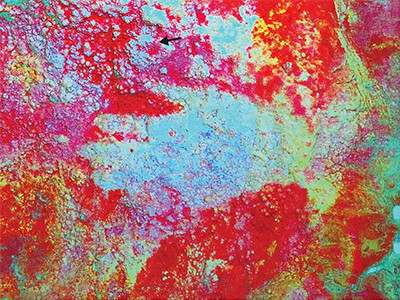 (left) Original photo. The inset shows where the overlying carbonate was sampled for MAL 13. 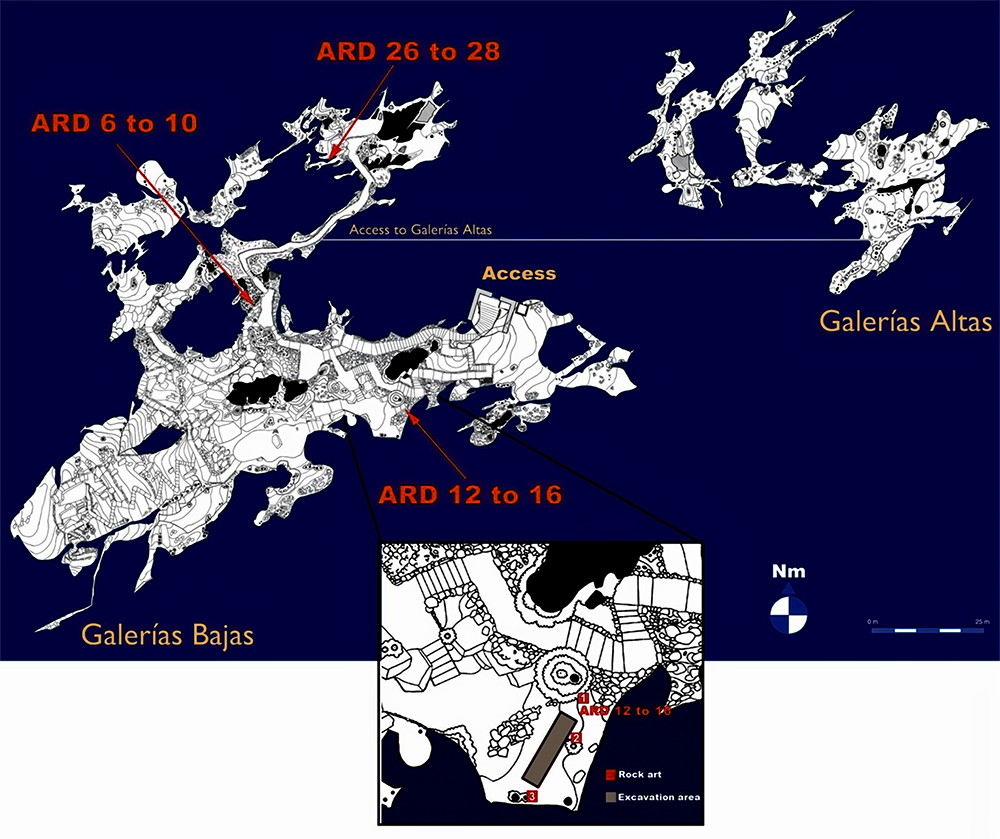 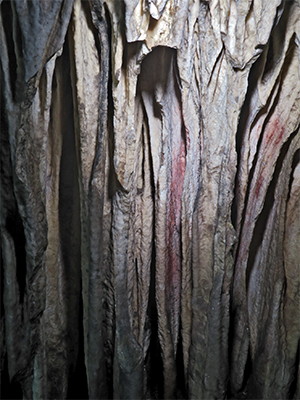 Red ochre (haematite?) can be seen on the curtains in the middle and on the right. 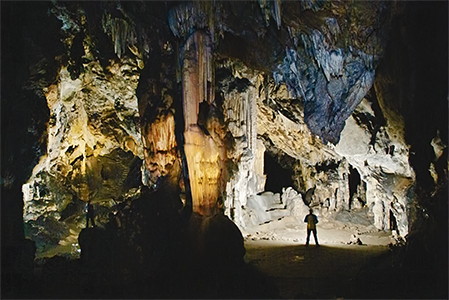 The cave of Ardales, which is also known as Cueva de Doña Trinidad or the Calinoria, was discovered in 1821 after the great earthquake in Alhama de Granada, which left the access to the cave open, after sedimentation had kept it sealed for more than 8 000 years.

The underground complex situated in the extreme west of the Serrezuela, at about 550 and 600 metres altitude above sea level and with a geological age of around 2.5 million years, has not suffered any changes for the last 30 000 years. Its use as a tourist attraction was first initiated by Doña Trinidad Grund, a women from Seville and daughter of the Consul General, who arrived in Malaga at the age of 15 and who bought the cave in 1860. She had a staircase and supports for some torches fixed into the wall.

On her death in 1896 the cave was abandoned, although in 1918 Henri Breuil conducted a detailed study of it. However, it was in 1985 when its recuperation and protection began. Nowadays, visitors can enjoy a one and a half kilometre walk through the inside to see such outstanding features as the Gran Sala, la Sala del Lago, la Galería del Espolón, la Galería de los Grabado and la Sala de las Manos.

A visit to the cave will reveal a labyrinth of columns, permanent lakes and beautiful stalactite and stalagmite formations. There are also some paintings and engravings dating from the Upper Palaeolithic period of about 20 000 years ago. The most important figure is the Gran Cierva en Negro or the Deer of Ardales. This is painted in black with a thick red tip where the heart is. There are other drawings of deer, goats, and fish. These relics, paintings, and engravings from the Palaeolithic period are done in 5 different colours, 8 distinct types of engravings with 4 different themes; abstract items, stains, traces, triangles, hands (about 10 and they are seemingly unique due to the way they are made) feminine figures and fauna ( there are more than 80 pictures of deer, horses, goats) make this cave almost unique in the whole world ( there are only 10 with similar characteristics). All this led to the cave being declared Patrimonio de la Humanidad (Patrimony of Humankind) in 1998.

Text above: Adapted from http://www.malaga.es/en/turismo/naturaleza/cnl-86/lis_cd-1696/ 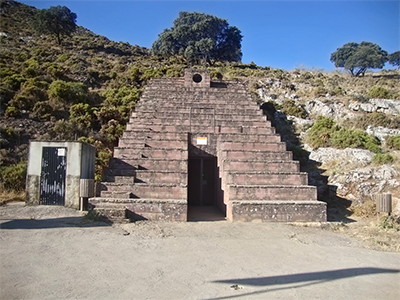 Only 1000 people a year are allowed to visit this cave (and always with an official guide) and the visits must be in groups of a maximum of 15 people a day. Such visits must be previously arranged by ringing 952 458 046. Due to the type length of the tour, it is recommended that visitors wear comfortable rubber-soled shoes. The temperature inside the cavity is 17° C and the humidity level is stable between 90% and 100%. 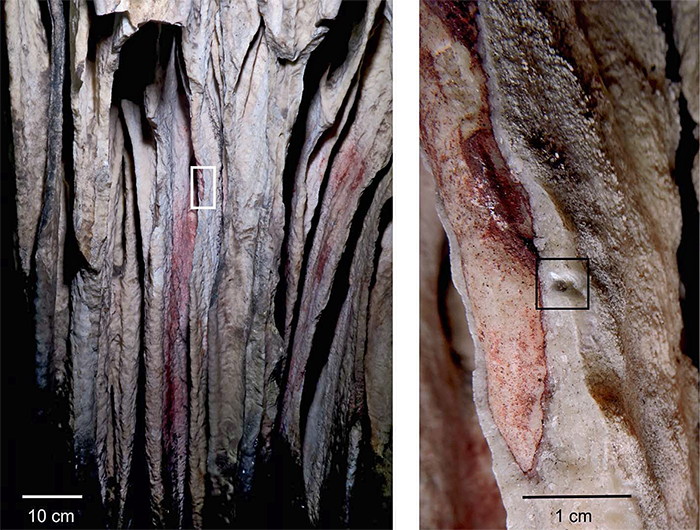 Speleothem curtain 8 in section II-A-3 in Ardales cave with red pigment, painted before at least 65 000 BP.

(right) Detail of curtain 8. The black square indicates where carbonate, overlying the red paint, was sampled for ARD 13. 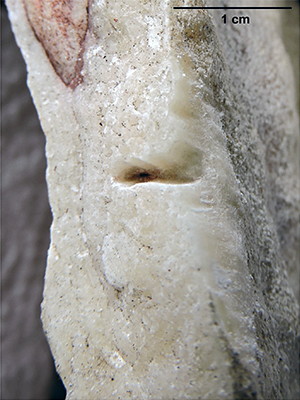 Detail of ARD 12 after sampling. Pigment is clearly visible towards the base of the sample area. 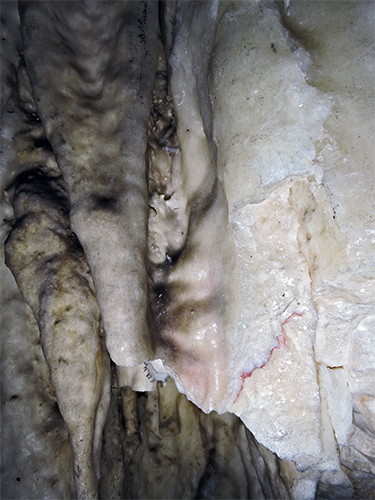 Red paint applied on a surface now completely covered by subsequent speleothem growth can be seen in cross-section as a thin red line on the clean fracture surface.

Ardales - Main painted panel. True width 120 cm. The colour yellow is indicated by vertical hatching. The red, longitudinal, brown, the same, but much denser. Note the red dot on the flank of the large black doe. The red head placed to the left in the corner is painted on the left wall, with the same scale.

Top part of a stalagmite in Ardales that was broken off and used as a container for pigment. 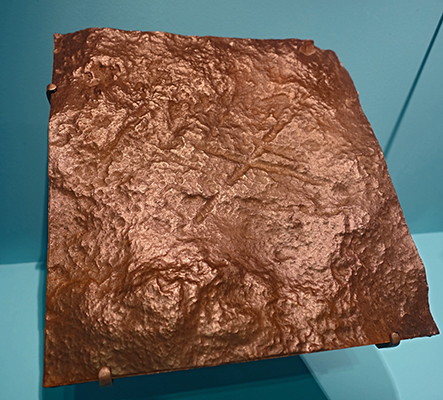 Facsimile of an engraving attributed to Neandertals, at Gorham's Cave, Gibraltar.