It was a very cold night in the tent. A massive front had come through and was bringing cold wet conditions. We set off just after 8.00 am after saying goodbye to Paul.

We rode along the Treppelweg (levee bank) for about 16 km. On the whole the surface was very good but there were a few rough patches. We passed the Wallsee-Mitterkirchen Kraftwerk and just before Huetting we noticed people filling water bottles at a spring. They explained that the water here was much better than in their village and they did this regularly. The water came from a spring and had less calcium than their well water. 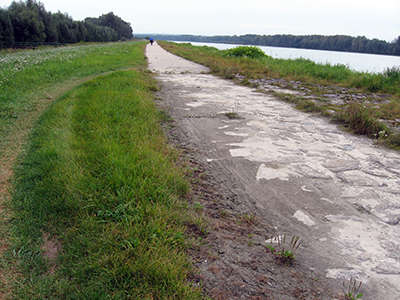 This part of the radweg had some rough and bumpy sections, which slowed us down a bit. Other parts were great. 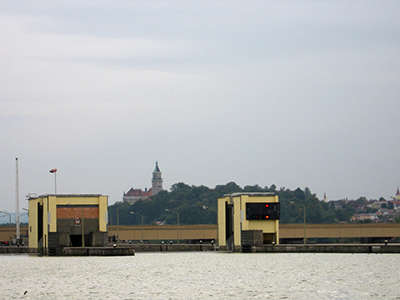 We were approaching the Wallsee-Mitterkirchen Kraftwerk. 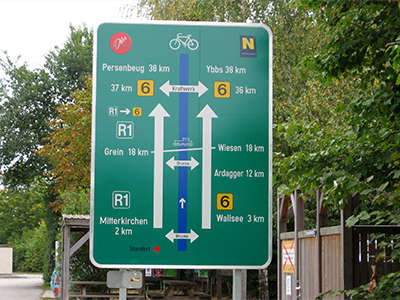 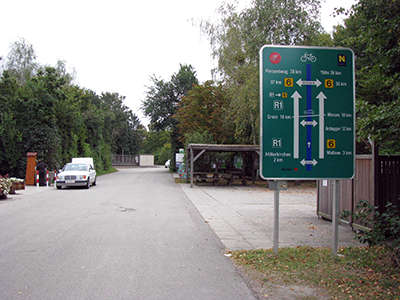 We decided to stay on the left bank. 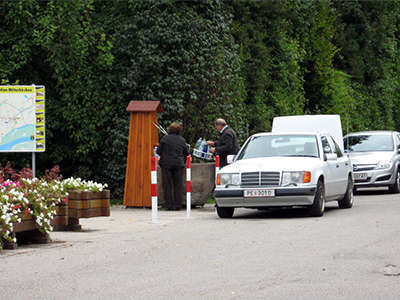 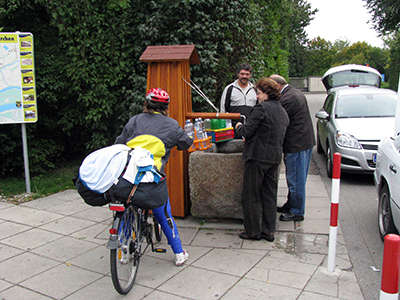 At this spring people were filling many bottles for drinking water at home, because it was high quality with less calcium than their well water.

We rode on through Huetting and Mutterkirchen and took the inland track rather than returning to the river bank. We were looking for a Gasthaus for breakfast and finally found one in Eizendorf. It was Sunday morning and everything seemed to be closed. By now it had started raining again and we needed shelter as well as food. The proprietors were lovely - we were the only customers but they prepared a lovely meal for us.

After that we headed down toward the river again and rode along another Treppelweg but it deteriorated quite a bit. At Dornach we followed the road through to Grein where the track seemed to disappear. The road was also very busy. It was quite hilly in this area with not much room for the road and narrow cycle path on the left. We could have crossed the river again over a bridge just before Grein but decided to stay on the left bank. There were no townships on the right hand side and we were starting to get very wet and very cold. 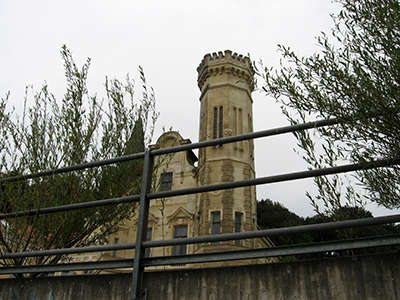 Schloß Dornach was built in 1890 by Princess Maria Theresia of Thurn and Taxis. 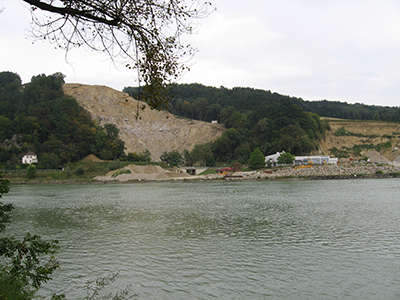 Quarry for road materials on the other side of the river. 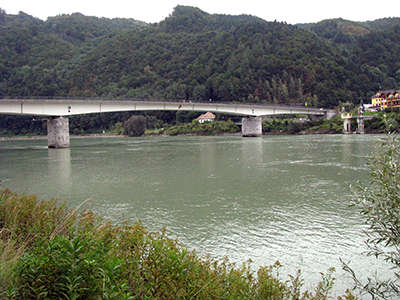 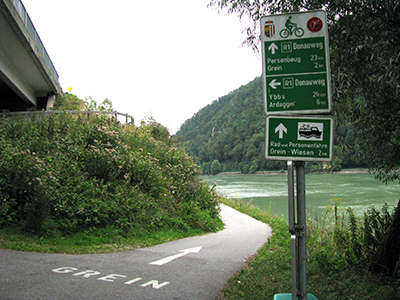 Bridge over the Donau. We took the radweg towards Grein. 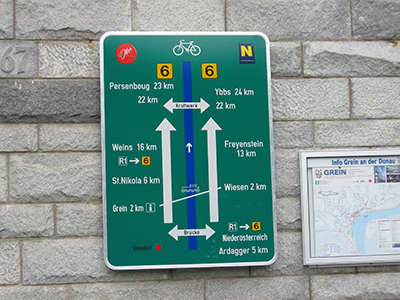 This particular section had some great signage. I wish the signage was standard throughout the radweg. 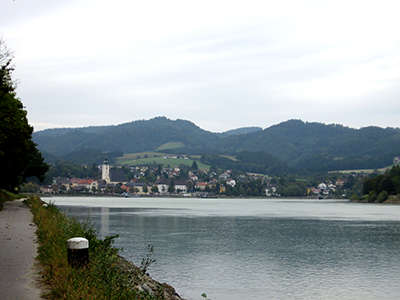 The lovely little village of Grein. 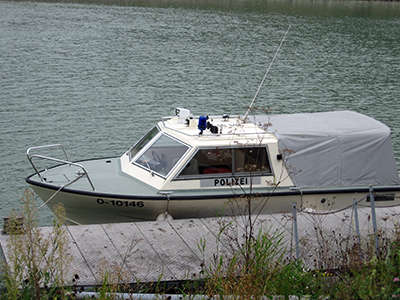 We were surprised to see a police boat, but apart from being necessary for the organisation of pleasure boats and barges, it would offer a fast passage up or down stream, independent of the roads.

This area is very picturesque but the weather spoilt it for us. The hills are quite steep and there are several curves in the river. Ruins of castles dot the hillsides and it was a pity that we couldn't enjoy the views. After St. Nikola - Struden with its Burg Werfenstein we rode for a few kilometres until Don spotted an open empty private garage. He pulled in and started to change into thermals as he was getting quite cold. We resolved to keep an eye out for a room somewhere from now on.

About a kilometre down the road we found what we were looking for. There was a cafe beside a walled stream and a sign saying Zimmer. I went in and asked if they had a room free and happily there was something available. The waitress took us to a nearby house with an apartment style room on the ground floor. It cost 40 Euros and was exactly what we wanted. We had coffee and cake at the restaurant while watching the boats travelling up and down the river.

Then we veged out with the TV for the afternoon. The weather forecast was not promising which was a disappointment. This was the part of the ride we were really looking forward to. In the evening we went round the back of the cafe building to the pub for a meal. Again we were the only customers - the weather must have really chased people away. I rang my friend Ursula Rauchbauer in Vienna to let her know we'd probably be there on Wednesday afternoon. 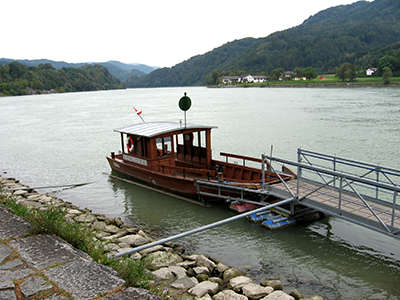 Another cycle ferry. They seemed to be all the same design in this section of the Donau. 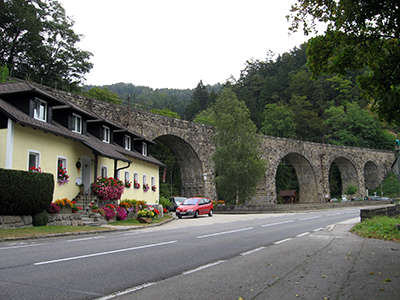 A beautifully designed and constructed stone bridge, with the signature red and pink flowers in this part of Austria showing on every balcony and window ledge of the houses. 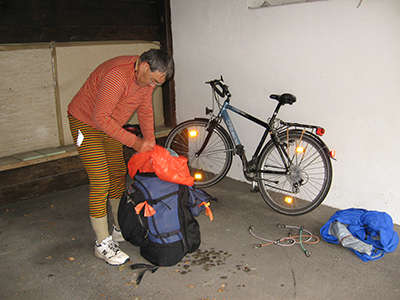 By the time we got to St Nikola, I was wet through. I found an open, empty garage right beside the road, pulled in, got out my thermals, and put them on. It was time to look for lodgings for the night, even though it was just lunch time. 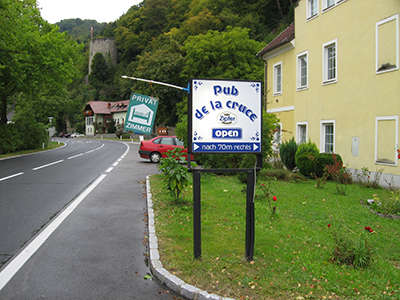 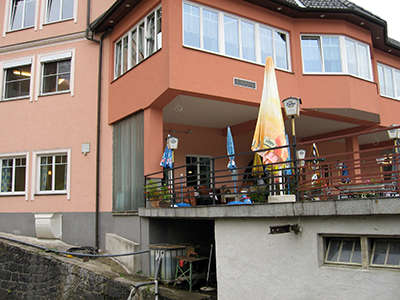 Any port in a storm. This looked good, and there weren't many people there either. 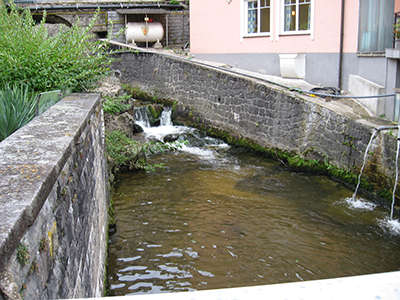 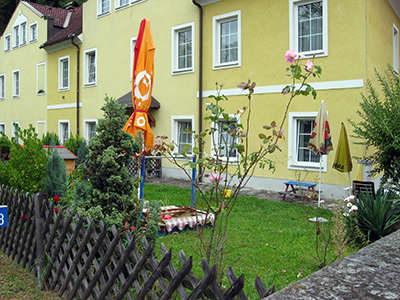 The owners had made a feature of the little brook that came down beside the hotel. 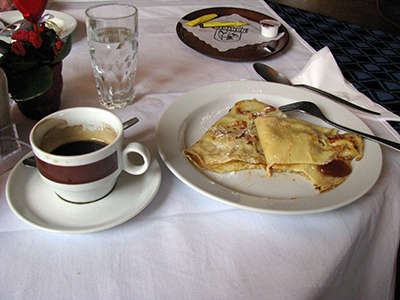 Coffee and pancakes. I felt a lot better after I had a hot shower and put on dry clothes. We veged out for the afternoon, and had a good meal that night.