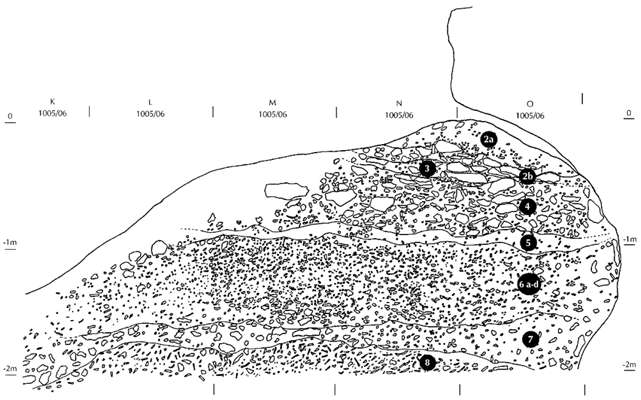 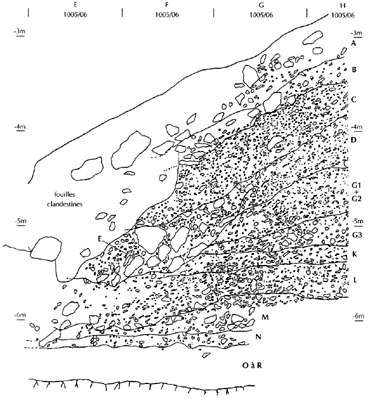 A wedge shape between the wall which opens out at the square N 1004 and N 1005 and layer 3, its maximum thickness is 0.50 m. A dark yellow ochre color, it is a sandy-clay sediment in which many pores are visible. Its upper part is the level 2a, thickness of about thirty centimeters, contain numerous large plaquettes (up to 30 cm in length). It plunges to the wall and is poor in archaeological remains at the top. The lower depth of about twenty centimetres, differs from the upper part by the absence of plaquettes. This level 2b consists of smaller limestone scree, usually dull, included in a sandy-clay sediments. It is the main level of the archaeological layer.

Formed by large boulders, it is located in the square in 1005 and N M 1005. Its horizontal elements may have been frozen at one time. This level has been extended along the slope but has been kept in that area. Poor in interstitial sediment, this layer contains some rare remains of wildlife.

Composed of small boulders (2 to 3 cm in diameter), this layer contains a few coarse elements (up to 5 cm in diameter). Interstitial sediment is rare. On an average thickness of 0.20 m, this layer has been subdivided, based on sedimentological arguments, into two levels: 4a and 4b, both rich in fossil remains. Layer 5

It is a thin wafer level, not joined, separating 4b and 6a.

This complex, thicker than 0.50 m, is divided locally from top to bottom:

The layer 6 complex is archaeologically rich and corresponds to the "last Mousterian habitat" of G. Henri-Martin. It is grey as a whole (burnt bones, ash) and becomes darker toward the wall (because of infiltrations of water).

This limestone layer, yellowish, disappearing towards the north, has a maximum thickness of fifteen centimetres. It is archaeologically poor.

This is a second layer of rich burned and unburned bone fragments, and is only partially excavated.

To avoid confusion, we have established a special nomenclature for deposits of this area (the south cut). It differs from top to bottom, as shown in the diagram above.

This consists of yellow-light brown colluvium (i.e. material washed down from the slope above - Don) with no structure visible to the naked eye. It truncates the top of the filling and contains the entire thickness of the gravel with sometimes large elements (length to 30 cm), and small pebbles and a few dull inserts aligned in the direction of moderately large blocks (10 cm) which constitute the level B, and is discontinuous. The A-B layer, little researched, appears to be sterile. It is thick to a maximum of 0.50 m. The lower limit of A is sharp and clear. Level A meets level C when not separated by the blocks of level B.

Its thickness varies in the depth of 0.10 m to 0.25 m. it is gray-brown. It contains the first archaeological level. It contains many elements of small gravel (2-3 cm) and larger platelets (8-9 cm). All are blunt and aligned in the direction of the slope, as well as the archaeological evidence. They are numerous, mainly skeletal remains. A few flint chips are burned. All these elements are embedded in the sediment interstitial dévoloppé just not structured porous. Examination under the microscope shows numerous micro-burned bones that give the sediment its grayish color.

This layer corresponds to the layer 8 of the southern part of the cut. The square G in 1006, it is affected by cryoturbation phenomena. (Cryoturbation (frost churning) refers to the mixing of materials from various horizons of the soil, even right down to the bedrock, due to freezing and thawing. - Don) Its lower boundary is diffuse.

The D layer reaches 0.50 m at maximum depth. It is usually brown in colour. It is arranged, at least in part locally, in two levels: D1 and D2.

D1 differs little from C, except by the absence of burnt material. It contains many small pebbles 2-3 cm in diameter as well as larger elements (5 cm) towards its base, and more rarely a few blocks up to 20 cm.

D2 differs from D1 by the rarity of stony elements. We meet only some coarse, dull pieces of 6-7 cm in diameter. The sediment is sandy-silty-clay loam, very porous structure without obvious structure.

Like C, this set is slightly affected by the phenomenon of cryoturbation in the northern part of the square G 1006. The D1-D2 limit is usually diffuse, the difference between D2 and C is greater.

In parts of South and North G 1006 H-1006, D2 is directly based on G1. The boundary between the two levels is clear and distinct.

Discontinuous, it was mainly observed in F1006 and in the northern part of G 1006.

It consists of large blocks often having an apparent diameter of about thirty centimeters with rounded edges, but less than the level in B. The sediment is silty-sandy, porous, light brown. Poor archaeologically, E reached a depth of 0.60 m in F 1006. It is nearly horizontal in F 1006 and disappears in G 1006.

This set is divided into three levels locally which are cut to the north by the layer E. It is steeply dipping on the north-south axis.

G1, maximum thickness of 0.35 m, consists of small boulders (1-2 cm) dull, with elements up to 5-6 cm, embedded in a silty sand matrix, porous, and of a non-structured dark brown color . It contains a rich set of archaeological material as well as wildlife elements sometimes anatomically connected. The G1-G2 boundary is clear and sharp;

0.15 cm thick, it is distinguished from J by the presence of coarse limestone (10 cm). Its limit with L is fairly clear.

Levels underlying L have been observed, both by the excavation of the square H 1005 and, secondly, on the sagittal FG/1003-1004, which is substantially the basis of the cut of G of Henri-Martin. These are the layers M Q.

It is a silty-clay brown-yellow, with a thickness that can not be specified now. This layer contains a rich fauna whose composition appears similar to that from the area west of the deposit. It is divided into three local levels. The lithic components are quite rare, but characteristic of the Quina Mousterian type. The limit M-N is marked.

This layer consists of weathered limestone boulders on the spot. A dozen centimetres thick, it appears limited to a lens holding the square G 1006 and the southern part of F 1006. Its limit with P is clear.

At least locally, this layer consists of silty clay sand, pale olive color. It is thicker than 0.10 m. Its limit with Q is very clear.