This sitemap link provides access to all the pages on my site.
Most searches for subjects covered in Don's Maps can be accomplished by searching on this page for the subject you are after, using your browser's search bar. 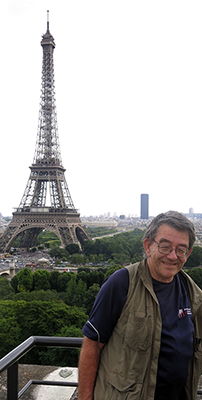 Photo: Me in Paris, on top of the Musée de l'Homme.

An account of the Battle of Megiddo (fought in the 15th century BC) between Egyptian forces under the command of Pharaoh Thutmose III and a large rebellious coalition of Canaanite vassal states led by the king of Kadesh. It is the first battle to have been recorded in what is accepted as relatively reliable detail.

Ancient Egyptian culture from its beginnings through the dynasties to the Ptolemaic period and its eventual decline as a Roman Province, told through reference to its mummies, statues, burial practices and artefacts. Although my first love is the stone age, mostly before 10 000 BP, I have also become interested in the magnificent works of art produced in ancient Egypt. This set of pages is being constantly updated.

Nubia and the Kingdom of Kush covered an area larger than that of Egypt, and as old, stretching from the 1st cataract of the Nile to the junction of the Blue and White Nile at Khartoum. At one time, during the 25th Dynasty, all of Egypt and Nubia was ruled by the Nubians, who invaded Egypt and attempted to bring it back to its former glory, with all of its ancient Egyptian art and gods. This page traces the history of Nubia from its earliest known beginnings with a Palaeolithic handaxe found at Selima Oasis in Sudan, made around 100 000 BC, to the end of the Meroitic Culture in 350 AD, when Meroë was destroyed by the Ethiopian Kingdom of Aksum.

In the Pacific Northwest Coast mythology, Raven is the powerful figure who transforms the world. Stories tell how Raven created the land, released the people from a cockle shell, and brought them fire. Raven stole the light and brought it out to light up the world. Yet Raven is a trickster—often selfish, hungry, and mischievous. He changes the world only by cleverly deceiving others in his never - ending quest for food.

In 1940 at Baume-Latrone, or Latrone Cave, drawings from the Upper Palaeolithic were discovered in a deep network 240 metres from the entrance. They have a unique style, and have been assigned to the Aurignacian. They have been dated to 37 464 BP (cal).

The Ishtar Gate was the eighth gate to the inner city of Babylon. It was constructed in about 575 BC by order of King Nebuchadnezzar II on the north side of the city. It was part of a grand walled processional way leading into the city. The walls were finished in glazed bricks mostly in blue, with animals and 'dragons' in low relief at intervals, these also made up of bricks that are moulded and coloured differently.

On the banks of the Bengawan Solo River in Java, Indonesia, 19th-century physician Eugène Dubois uncovered an astounding fossil find: the bones of what appeared to be an ancient human, surrounded by animal remains and shells. Excavated in the 1890s, the site gained fame as the home of 'Java Man', better known today as Homo erectus. Deliberate scratching on a fossil Pseudodon shell, is almost certainly an engraving made by Homo erectus at Trinil in Indonesia.

Pasiega Cave in Spain was of mostly academic interest until the discovery that some of the art in the cave may have been put there by Neanderthals. This result has now been discredited. Here is the background to that story, with many drawings of the art of the cave from the old master himself, Breuil.

Inconsistencies in the EC books. Amy McDonald has found an inconsistency between the fifth and sixth books concerning Matigan, apprentice to Jondalar.

Of all the ancient peoples that have been studied by scientists, none has set puzzles quite so profound as those left behind by the Denisovans. However game changing DNA research and techniques now mean that we can trace which hominins and animals used a particular site. No longer do we need actual fossils to determine this, a small sample of the dirt from the cave or open air site is all that is required. These methods will revolutionise archaeology and anthropology.

Another Palaeolithic Venus has been discovered in Renancourt, Amiens. The statuette is in good condition, carved in limestone/chalk, and is 40 mm high. It is estimated to be 23 000 years old, and is from the Gravettian. The breasts, buttocks and thighs are all of exaggerated volume, as is normal in this tradition.

I have reorganised and added to the page on tools, to include sections specifically on the development of the ancient Acheulean hand axe by Homo erectus and the various types of this important tool, and the mastery of its creation by Homo neanderthalensis, who not only made it in the classic fashion, working on a core or nucleus bifacially, known as Moustérien de tradition acheuléenne or MTA, but also took flakes and turned them into bifacially worked Acheulean hand axes. There is a short summary of the development of such tools right through to Neolithic arrow heads, followed by a longer section on the step by step development of the full range of tools from choppers through to the bow and arrow.

The sites generally known as Atapuerca are a series of very important excavations in the Sierra Atapuerca, in Spain, first discovered as a result of the construction of a railway line through this limestone region. Taken together, the sites are more extensive in terms of hominin discoveries than anywhere else in Europe, or perhaps the world. The discoveries range in age from 1.4 million years old stone tools to neolithic ceramics, and the hominins include Homo erectus, Homo antecessor, Homo heidelbergensis, and Homo neanderthalensis.

Archaeological / Archeological Sites - Some sites of interest in the study of the Palaeolithic / Paleolithic era.

Venus figures from the Stone Age - The Venus of Willendorf as well as those from or known as: Dolni Vestonice, Galgenberg, Kostenki, Brassempouy, Impudique, Lespugue, Abri Pataud, Monpazier, Tursac, Die Lowenfrau, Savignano, Femme a la Corne, Berekhat Ram, Gagarino and others.

Tools and Decorative Objects of the Stone Age - Tools and other items used in the Stone age, including spear straighteners, firestones, adzes, beads, and needle cases, as well as the physics of a spear thrower and how stone tools are made.

There are a lot of things to learn about photography in museums, the problems are like no other area of photography. Here I try to explain the basics, and the pitfalls involved, and give an indication of what I think is an ideal camera for the situation.

I often need to clean up line drawings of artefacts and sketches - the originals are typically from pdf files, and of poor quality. This method using Photoshop allows me to make much better images than the originals, especially when combined with first making the drawings a lot larger.

Archeology for Jean Auel fans - the sites and sculptures and places mentioned in Jean Auel's series on life in the ice age.

Maps of the Earth's Children Series - Maps include the true extent of the ice in the last ice age, as well as maps of The Territory of the Zelandonii, Journeys in Clan of the Cave Bear, local area around the cave in Clan of the Cave Bear, The Valley of Horses, Iron Gates map, local map of the Sharamudoi, local map of The Mammoth Hunters Lion Camp, map of Ukraine, map of The Plains of Passage, Clickable map of the Plains of Passage, Donau Mouth to First Snow from the Plains of Passage, The Encounter with the S'Armunai, Wurm and Riss Glaciation in the headwaters of the Donau (Danube), How I draw the maps.

In 1865, Charles William Hitchcock and his wife Emma (nee Fuller) came out to Australia in the ship 'Royal Dane'. William Henry, my grandfather, was born on the ship on the 24th July 1865 while the ship was anchored in Keppel Bay. This is the index page for a number of family photographs and some of the early family history.

A bicycle trip down the Danube from the source of the Danube to Budapest.

Dinosaurs and other ancient animals. Dinosaurs, or Terrible Lizards, were the dominant terrestrial vertebrates for over 160 million years.

Bushwalking - This is an overview of a wonderful part of the world - the gorge country east of Armidale in northern NSW Australia, in which I spend as much time as I can exploring and walking.

Cycling - Cycling for 500 to 700 km over one or two weeks on fully supported rides is a great way to see Australia. 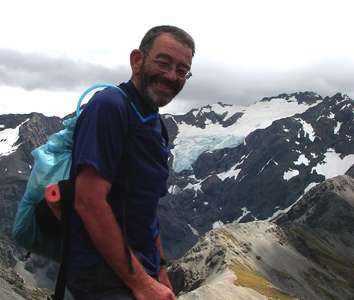 The webmaster on top of Avalanche Peak on a nine week tramping tour of the South Island of New Zealand.

Earth's Children is a registered trademark of Jean M. Auel.
The books in the series: The Clan of the Cave Bear, The Valley of Horses,
The Mammoth Hunters, The Plains of Passage, The Shelters of Stone, and The Land of Painted Caves are all copyrighted by Jean M. Auel.